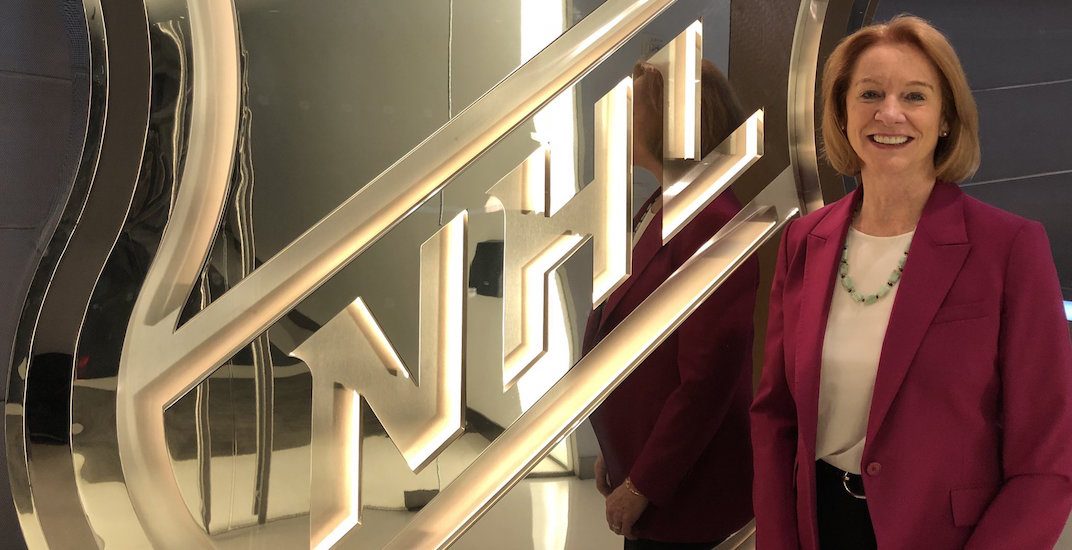 After months of speculation, commissioner Gary Bettman made it official on Tuesday, welcoming Seattle as the NHL’s 32nd franchise.

The team will begin play in what will essentially be a brand new stadium at Seattle Center, close to the Space Needle. Over $700 million is being poured into KeyArena, which will keep its “iconic” roof, but gut the rest.

And though they don’t yet have a name and won’t pick up players until the expansion draft in June 2021, Washington State politicians have already begun trash talking their neighbours to the north.

Canucks fans are expected to make the three-hour drive to Seattle in large numbers to watch their team play. When they arrive, they may not receive a nice reception.

Seattle Mayor Jenny Durkan has been talking smack for the past 12 months.

“The Canucks are excited to come here and get beat,” Durkan said last December. On Tuesday she doubled down, telling Sportsnet’s Irfaan Gaffar that “the Canucks don’t stand a chance.”

.@MayorJenny – “I am grateful to Commissioner Bettman, the NHL Board of Governors, the team at NHL Seattle, & above all, the thousands of hockey fans across Seattle & the Puget Sound who made their voices heard. I hope the Canucks are ready for us.” #ReturnToHockey #NHLSeattle

Washington State Governor Jay Inslee has jumped on the bandwagon too.

“I look forward to seeing the goalie sunburned by the goal light as the new NHL Seattle team beats the Vancouver Canucks in 2021,” he tweeted.

Not to be outdone, Vancouver Mayor Kennedy Stewart has responded.

“We’ve got a great young team here with [Elias] Pettersson and [Brock] Boeser,” Stewart said in a phone interview with Daily Hive. “By the time Seattle gets up to speed these guys will be really in their prime. I feel sorry for the governor and mayor because it’s going to be them that has all the red lights shining behind their goalie.”

“I’d really like to host them, if we can, for the first game. Anybody that wants to come up to Vancouver, we’re happy to show them what a real hockey team looks like.”

BC premier John Horgan was feeling sassy too:

Won't be as bad as the sunburn your goalie's going to get from playing golf after the regular season's over. 😉

Ok, so maybe our politicians need to work on their trash-talking skills. They’ve got three years to practice.

The truth is, a new NHL team in Seattle is great news on both sides of the border.

“I think this is tremendous news and a huge congratulations to the City of Seattle for this, really looking forward to developing what I hope is a friendly rivalry between the two teams,” mayor Stewart added. “Now we’ll have the ‘Battle of Cascadia’ which is going to be fun to watch.

“We’ve been trying to develop this corridor between Seattle and Vancouver. There’s been talk about high-speed rail and about connecting the links, and this is just a great way to promote it.

“I think it’s going to increase some back and forth traffic. It’s great to have that fan base and all the commerce that brings.”

Like the Canucks, the new Seattle team will play in the Pacific Division, Bettman revealed. That means Vancouver and Seattle will clash five times a season. As division rivals, they’re also likely playoff opponents down the road too.

With just 230 kilometres separating the two cities, Seattle will become the Canucks’ first natural geographical rival. The rivalry will help build interest in both markets and bring extra excitement to games between the two teams.

The Canucks are ecstatic about the news for those reasons, on top of it easing their notoriously brutal travel schedule.

“Today is an exciting day for the NHL and especially hockey fans here in the Pacific Northwest,” said Canucks owner Francesco Aquilini in a statement. “Congratulations to David Bonderman, Tod Leiweke, the NHL Seattle group, the City of Seattle, and everyone involved in making today a reality. Seattle is a great sports city and we can’t wait to ignite a true regional rivalry west of the Rockies for Canucks fans.

You spoke, and the world heard. Thank you, fans! #ReturnToHockey #NHLSeattle