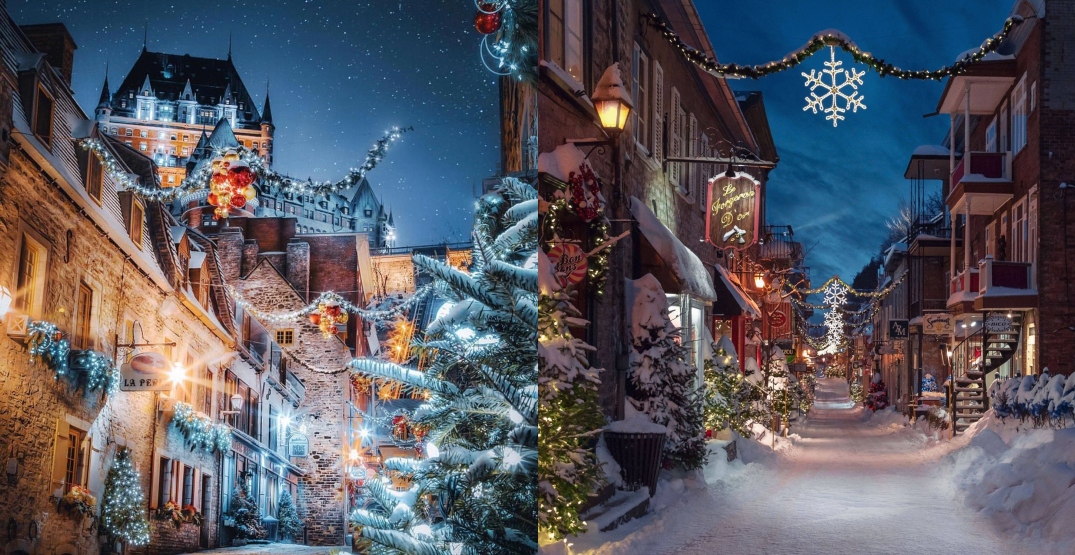 If you’re looking for a magical Canadian spot to add to your Christmas destination wishlist this year, you needn’t look further than Quebec City.

The cobblestone streets, charming atmosphere, and snow make the capital city come alive during the holidays, making it look like a classic Christmas movie.

From the end of November until January, Quebec City looks like it’s taken right out of Charles Dickens’ A Christmas Carol — it’s that breathtaking.

From traditional European Christmas markets to its festive food, music, events, and photo ops, here is why Quebec City is the best Christmas destination in Canada.

And don’t just take our word for it, CNN says it’s the best Christmas destination IN THE WORLD.

Quebec’s biggest Christmas market, styled after the Germans, offers over 90 exhibitors, events, and magical holiday lights in the heart of Old Quebec.

The Marché de Noël Allemand de Québec fuses a European holiday flair with the timeless old streets of Quebec City. The month-long market offers free activities for the whole family, a festive atmosphere, original gift ideas, the tasting of German food and drink, and Christmas choirs from November 25 to December 23.

If you want a white Christmas (looking at you, BC), Quebec City usually gets blanketed with a beautiful layer of snow. It’s not too much that it’s annoying and not too little that it’s invisible.

The perfect amount of snow does exist.

Quebec City is one of the oldest cities in all of North America. It was founded in 1608 along the historic St. Lawrence River, and plenty of its cobblestone streets, celebrated shops, and French colonial architecture are still reminiscent of the Quebec of yore.

Toss on a little bit of snow and you’ll feel like you’re starring in a movie.

Because really, there’s only so much eggnog you can drink, right?

The Fairmont Le Château Frontenac is the most photographed hotel on the planet.

When it comes to Christmas decorations, the symbols of Quebec City don’t hold back. You don’t need to be staying at the hotel to go picture heavy but if you want to, it’s worth it.

You know that weird limbo period between Christmas Day and New Year’s Eve where you’re not really sure if you should sleep for three days or keep partying?

Quebec City makes it difficult not to do the latter.

Restaurants stay open, music and dancing fill the streets, and the Quebec Winter Carnival kicks off in February if you really want to extend your stay.

Short of hopping on a plane and flying to Europe, you won’t get the opportunity to take these types of pictures anywhere else in Canada.

Do it for the ‘gram and next year’s Christmas cards.