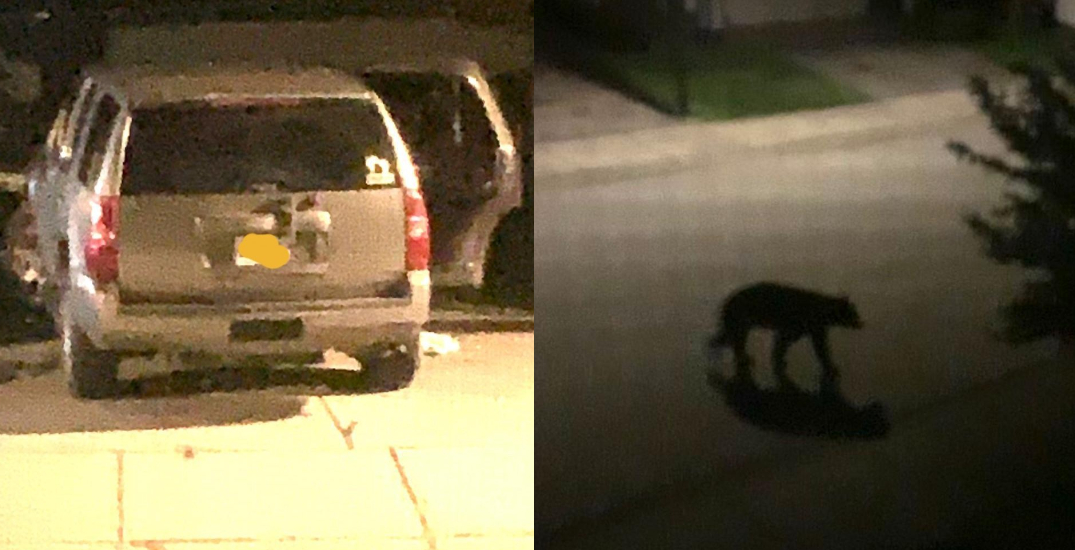 As a Metro Vancouver family slept soundly in their beds on June 10, their car and garage were broken into by a pair of unusual suspects.

Rather than opportunistic thieves or would-be joyriders, the culprits were a pair of hungry black bears.

Sean McQuillan recounted the ordeal on social media the morning after – once his neighbours had filled him in on the ordeal.

McQuillan said the bears were able to open his car door with their paws and rummaged around in search of leftover snacks.

“I’m talking half eaten sandwiches, bell peppers, cracker crumbles, diapers – you name it this bear was in heaven at 2:50 am,” McQuillan tweeted.

One of the bears. pic.twitter.com/cYnpiYCiJv

The hairy duo then turned their attention to the garage, once again getting in with ease.

Despite the garage being full of antique lamps – McQuillan works in set decoration – the bears didn’t break a single one, and instead occupied themselves with a few bags of trash.

McQuillan, his wife, their kids, and their two pugs who “bark at anything” slept blissfully throughout the pilfering, calls from neighbours, and the arrival of three police cars.

McQuillan said officers showed up after the bears had left – unharmed, he noted – and weren’t convinced that the animals were smart enough to break into a car, despite the “bear-like damage” done to a car seat.

This was my son’s car seat after they were done with it. pic.twitter.com/tQqLa8KshM

The unexpected burglars are the most recent in a slew of bear sightings around Metro Vancouver.

In May, a bear was spotted wandering along a set of train tracks in Gastown, and a mother and two cubs checked out a Coquitlam backyard.

As for McQuillan, his next move is figuring out “if ICBC covers bear.”

“After asking the police if this is a Bearglury or a Bear & Entry they are no longer taking my calls,” he ended off the Twitter tale.