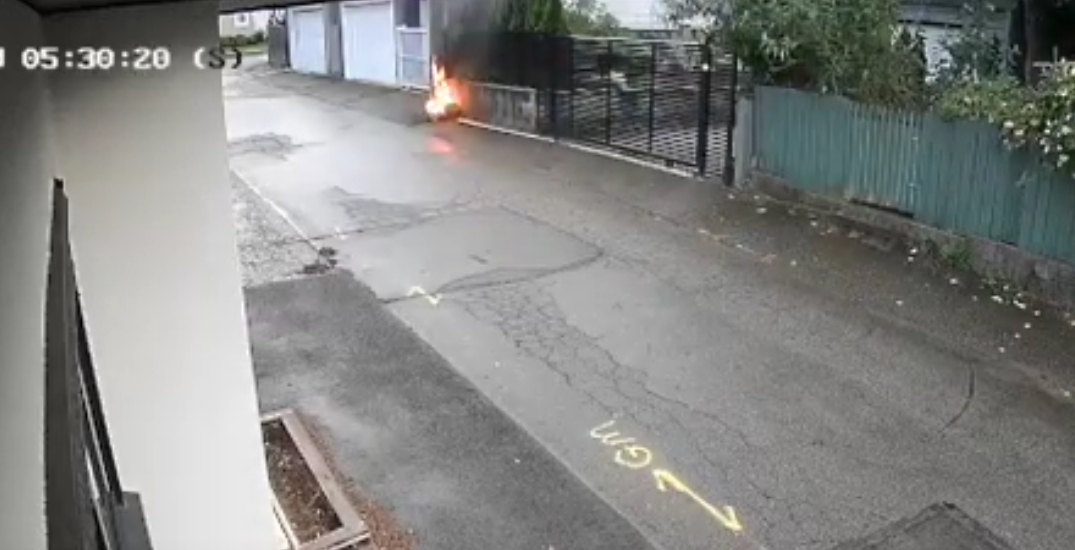 An alleged arsonist was caught on tape setting a blaze behind homes in East Vancouver.

Security cameras captured the ordeal as it unfolded just before 5:30 am on June 9. The footage was amalgamated into one clip, and posted on YouTube by area residents.

The video shows a man walking through an alley in the city’s Renfrew neighbourhood.

He bends down and touches the base of a wooden pole and then walks away, pulling up his hood as he goes. As he exits the frame, smokes begins to rise from the pole.

Flames appear in a matter of minutes, growing higher with each passing moment. Based on time stamps in the clip, the fire burned, unnoticed, for more than half an hour.

The fire was only discovered around 6 am when a nearby resident left for work. The man attempts to put the fire out with his coffee, and kicks the flames away from the wooden pole.

Another neighbour hears his cries for help and appears with a garden hose, finally extinguishing the flames.

“While in the end this fire did not end up doing much damage and no one was hurt, that was pure luck,” the video description reads.

“This person is walking free in our city and the next fire he lights could burn a house down and kill people.”

The video describes the suspect as having a moustache and a distinctive walk or limp. He was wearing a black and white tracksuit with a white hood, a black hat, and white shoes.

Residents are asking anyone who recognizes the man in the video is to email [email protected] so that they can inform the investigator assigned to the case.

Daily Hive has contacted Vancouver Police and will update this story accordingly.