In a letter addressed to Wet’suwet’en Hereditary Chief Nam’oks yesterday, BC Premier John Horgan says he will not be personally meeting with hereditary chiefs in Smithers, BC, on Wednesday.

The letter, which cc’d Prime Minister Justin Trudeau, offered to send BC Minister of Indigenous Relations and Reconciliation Scott Fraser in his place.

“I remain committed to dialogue to achieve a peaceful and safe resolution of this issue,” said Horgan in the letter. “To that end, I have asked Scott Fraser, Minister of Indigenous Relations and Reconciliation, to be available to meet you on Wednesday, January 22 in Smithers.”

Horgan’s response comes five days after a public call from chiefs to meet with Horgan, to urge diplomacy in the ongoing dispute related to the Coastal Gaslink Pipeline on unceded Wet’suwet’en territory in northern BC.

In his letter, Horgan assures Chief Nam’oks that Minister Fraser “will be focused on working [to] find a way forward.”

Horgan also referred to the interlocutory injunction issued by the BC Supreme Court earlier this month and the RCMP checkpoint set up at Morice Forest Service Road to enforce the injunction.

“Our government has no authority to vary that injunction, nor to direct the RCMP in the fulfillment of its responsibilities,” said Horgan.

In a release last week, however, hereditary chiefs urged Horgan to meet with them rather than allow the RCMP exclusion zone to continue.

“We urge Premier Horgan to meet with the Wet’suwet’en hereditary chiefs, rather than rely on a BC Supreme Court injunction order to justify infringement of our title and the forcible or violent removal of our peaceful members from our unceded territories,” says the release.

In his letter, Horgan also referenced his 2019 visit to Wet’suwet’en, saying that he remains “committed to the process of reconciliation” undertaken on that occasion.

According to hereditary chiefs, Horgan made an address on March 16, 2019, where Wet’suwet’en people collectively witnessed Horgan’s commitment to “genuinely work together with hope and optimism for a better future not just for ourselves but for the generation after us and the generation after that.”

“Our teachings expect that leaders show integrity and honour their words,” says the release.

Opposition to the pipeline and the RCMP’s actions on Wet’suwet’en territory have been ongoing since the checkpoint was established last week, including legal complaints filed against the RCMP by the BC Civil Liberties Association on behalf of two individuals who were turned away while trying to bring food into camp.

The RCMP has since responded, citing that “miscommunication” was the reason why individuals were turned away, and that the checkpoint is in fact “not an exclusion zone.”

A series of protests have been held in solidarity with Wet’suwet’en, including one yesterday blocking the Swartz Bay terminal out of Victoria.

Indigenous Youth occupied the Office of Minister of Energy, Mines, and Petroleum Resources on Tuesday afternoon in solidarity. 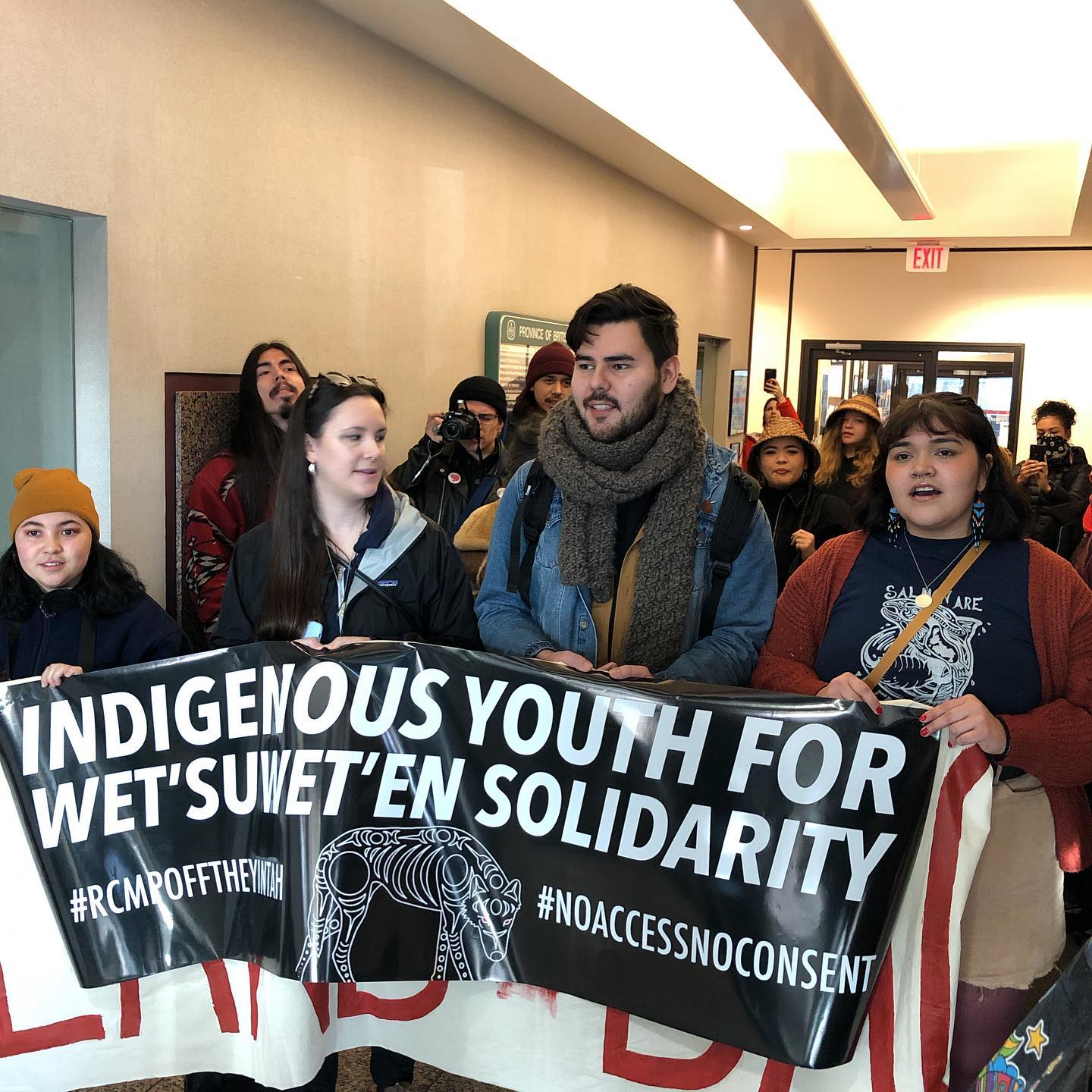 “As Indigenous youth we stand with Wet’suwet’en assertion of sovereignty because we understand that Indigenous Peoples will cease to exist without our land; our languages, cultures, and future generations cannot survive without our it,” says the letter.

“Indigenous youth are not only inheriting a climate crisis driven by fossil fuel projects like CGL, but Canada’s legacy of colonization, genocide, and gendered violence against Indigenous women, girls, and Two-Spirit people. In protecting the lands from industrial development, we are protecting our bodies from violence.”