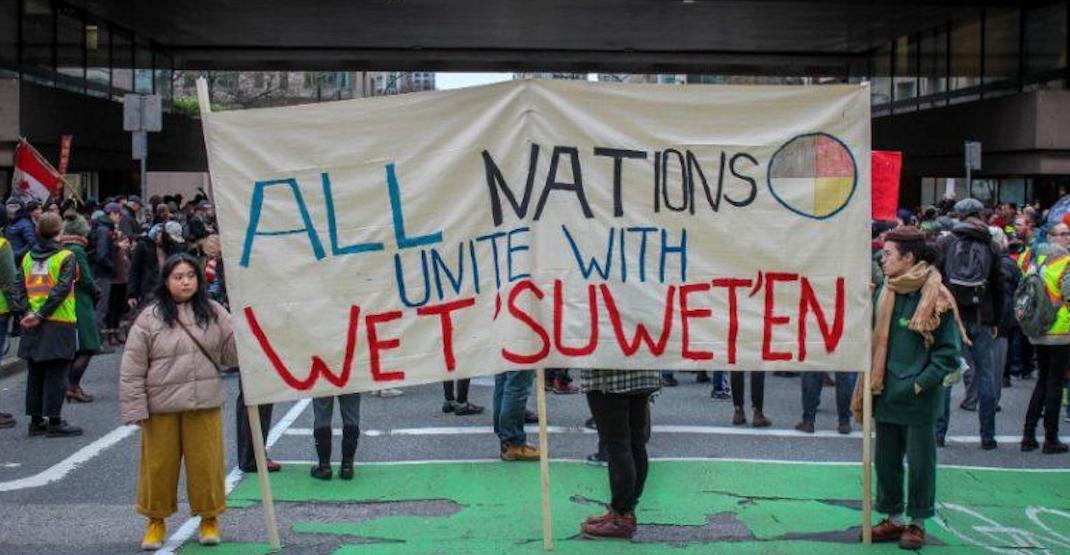 A protest is scheduled to take place in Vancouver this weekend, in solidarity with members of the Wet’suwet’en Nation, against the construction of the Coastal GasLink pipeline.

Protestors in Wet’suwet’en were just issued an injunction from BC Supreme Court by Coastal GasLink ordering protesters to clear way and move obstructions for workers.

The injunction prohibits individuals from impeding workers in any way, including a 72-hour notice given to protestors to “remove any obstructions,” and ordering peace officers to enforce the injunction.

The protest in Vancouver takes place on Saturday, January 11, 2020, in solidarity with the Wet’suwet’en Nation.

The protest is set to start at 11:30 am, and protestors are expected to gather at 800 Smithe Street and march to Victory Square, led by drummers.

Wet’suwet’en issued an international call for a week of solidarity this week from January 7 to 12, on the one-year anniversary of an RCMP raid that took place last year.

“We call for solidarity actions from Indigenous and non-Indigenous communities who uphold Indigenous sovereignty and recognize the urgency of stopping resource extraction projects that threaten the lives of future generations,” said the call out.

They have issued and enforced an eviction of Coastal GasLink workers from the territory, and the last Coastal GasLink contractor was escorted out by Chiefs on Saturday, January 4, 2020.

“As far as we know, CGL intends to commit trespass on Wet’suwet’en lands and continue construction. They will likely rely on RCMP violence to force their way into our territories once more,” said a release from Wet’suwet’en Hereditary Chiefs.

“There will be no access to Gidimt’en and Dark House territories without the free, prior, and informed consent of the Hereditary Chiefs.”

The UN Committee on the Elimination of Racial Discrimination issued a statement last month calling upon the Canadian government to cease construction on the Coastal GasLink pipeline, the Trans Mountain Pipeline Expansion and the Site C Dam, on unceded and traditional Indigenous lands until they receive “free, prior, and informed consent.”

“The province has proclaimed they will implement the UN Declaration on the Rights of Indigenous Peoples, which includes Free, Prior and Informed Consent, but has failed to intervene in this issue. Currently, the province, federal government, RCMP, and CGL have all violated Wet’suwet’en law,” said the Hereditary Chiefs in the release.

Protests against the pipeline and the RCMP raids also took place in Vancouver and across the country last year, after a number of protestors were arrested or forcibly removed.

“There is no access to Wet’suwet’en territory without our consent. We are the title holders, and the Province must address the issue of our title if they want to gain access to our lands,” said the release.

All Eyes on Wet’suwet’en! March and Rally