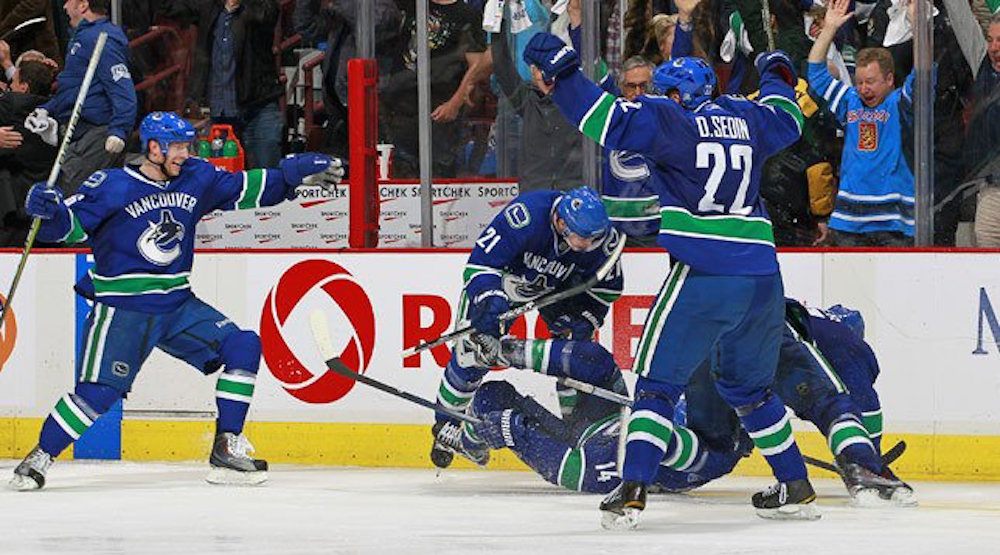 When asked for his favourite memory as a Vancouver Canuck on Monday, Alex Burrows cited the stanchion-assisted Kevin Bieksa goal versus the San Jose Sharks that lifted the Canucks to the Stanley Cup Finals in the spring of 2011. Burrows got the second assist on the goal, as he chopped the puck back to Alex Edler at the point before Edler’s dump-in ricocheted to an alert Bieksa for the game-winner.

While that was an unforgettable and historic moment in the history of the franchise, it’s safe to say another big goal from that memorable playoff run is most widely viewed as his biggest moment with the Canucks: the goal that slayed the dragon.

After being bounced from the playoffs in the second round by the Chicago Blackhawks the previous two seasons, the Canucks entered the 2011 NHL playoffs as the Presidents’ Trophy winners and heavy favourite to win the Cup. They raced out to a 3-0 series lead with wins of 2-0 and 4-3 in Vancouver, and 3-2 in Chicago. The defending Stanley Cup champions were far from done however as they won the next three games by scores of 7-2, 5-0, and 4-3.

There was no shortage of drama as goaltender Roberto Luongo was pulled in Game 5 and Cory Schneider started Game 6. Schneider only lasted 42 minutes in Game 6 however as he had to leave the game with cramps. Re-enter Luongo, who played a solid third period and overtime before giving up the winner.

Back to Vancouver for Game 7 and back to Luongo in net. The atmosphere was unlike any Canucks game previously seen at Rogers Arena. It was a mixture of excitement, nervousness, and anticipation.

And Alex Burrows was ready for the game of his life.

The fun started less than three minutes into the game as Burrows finished off a pretty passing play from Ryan Kesler and Mason Raymond.

The early goal was a perfect start to the game and gave the Canucks some confidence after three straight losses.

The rest of the first period and the entire second period went back and forth, with both Luongo and rookie Corey Crawford coming up big.

Then came the crazy third period.

Just 21 seconds into the final frame, Burrows raced away from Duncan Keith in the neutral zone, only to be hooked by the defenceman resulting in a penalty shot.

Burrows couldn’t beat Crawford on the blocker side and the score remained 1-0 Vancouver.

With just over three minutes left in the third period, Burrows again beat Keith to the Blackhawks zone. Keith took a hooking penalty and took a seat in the penalty box.

Then, the unthinkable happened.

Skating through the neutral zone on the power play, Burrows got poked check by Brent Seabrook and the puck ended up on the stick of Jonathan Toews. He fought through a double-team from Burrows and Dan Hamhuis, slid the puck over to Marian Hossa, and then put Hossa’s rebound past Luongo all while lying on his stomach with Burrows checking him from behind. It was an amazing display of determination by the Blackhawks’ captain; the shorthanded goal game with 1:56 left.

Nerves turned to outright fear when Burrows took a holding penalty on Duncan Keith just 24 seconds into overtime. This record-breaking season surely couldn’t end this way, could it? Presidents’ Trophy and a three-game lead down the drain? And to the Chicago Blackhawks of all teams?

Just 46 seconds into overtime, Luongo made an amazing save off of Patrick Sharp in the slot after Toews deked Bieksa at the side of the net.

The Canucks killed off the rest of the penalty and with just over five minutes gone in the extra frame, the line of Burrows, Kesler, and Raymond controlled the puck in the offensive zone off the faceoff.

And then this happened:

I’ve watched this goal dozens of times and there are a few things that stick out to me:

Naturally, the goal sent the crowd into a frenzy, and it capped off an up-and-down game for Burrows: two goals, two penalty minutes, two hits, seven shots on goal, 21 minutes of ice-time, one bad giveaway, and one penalty shot.

And one slain dragon.