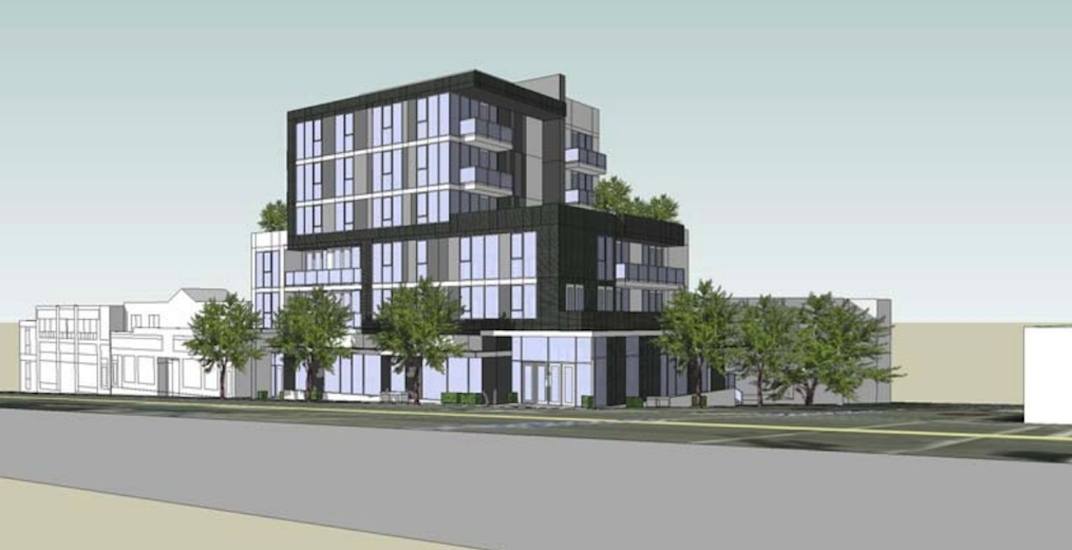 A six-storey building proposed for a site on the Central Broadway Corridor, just one block west of a future SkyTrain station, seems like a big waste of a major transit-oriented development location.

Eric Law Architect Inc. has submitted a development application to the City of Vancouver to redevelop 77 East Broadway – the northwest corner of the intersection of East Broadway and Quebec Street – with a 76-ft-tall, six-storey building with residential and restaurant space. The 7,334-sq-ft property is currently occupied by Goldline Motors Used Dealership.

According to the proposal, there will be 4,600-sq-ft of restaurant space on the ground floor, 25 secured market rental homes within the upper floors, and 19 vehicle parking stalls within the underground levels.

The redevelopment will have a total floor area of 22,000 sq. ft., giving it a floor space ratio density of three times the size of its lot.

But given the site’s close proximity to the future Millennium Line Broadway Extension station at the intersection of Main Street and East Broadway, and the redevelopment potential of this existing low-density stretch of the Central Broadway Corridor, such a modest use for this property seems to be spectacularly unambitious.

The proposal works within the framework of existing zoning; under the municipal government’s recently implemented Interim Rezoning Policy, no new rezoning applications will be accepted for the Central Broadway Corridor until the Broadway Corridor Plan (BCP) is finalized in 2020.

The only rezoning exceptions are for proposals that offer 100% social and supportive housing or facilities for community care or group residents.

Similar to the Cambie Corridor Plan, the future BCP will provide guidance on the type of new density that will be allowed on the Central Broadway Corridor ahead of the 2025 opening of the Broadway Extension between VCC-Clark Station and Arbutus Street.