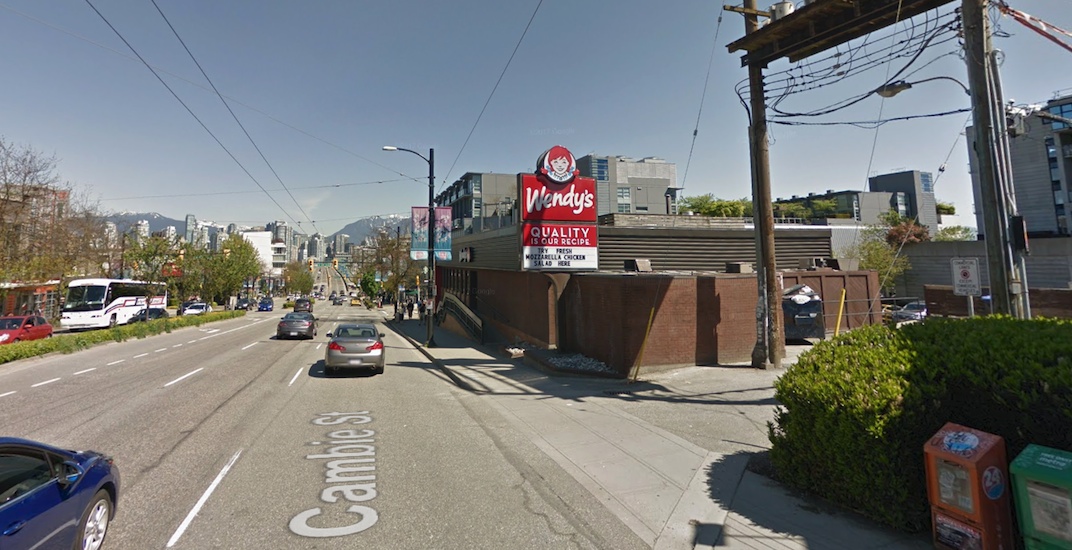 The Wendy’s restaurant site at the prominent northeast corner of the intersection of Cambie Street and West Broadway has hit the market, and commercial real estate broker CBRE says there is potential for an “iconic” redevelopment.

The property at 480 West 8th Avenue – across from Whole Foods and Home Depot – spans almost half a block with its 22,237 sq. ft. lot. It is framed by Cambie Street to the west, West 8th Avenue to the north, a residential building to the east, and a laneway to the south.

The single-storey restaurant building is situated on the western side of the property, and ground-level parking space is on the eastern side. 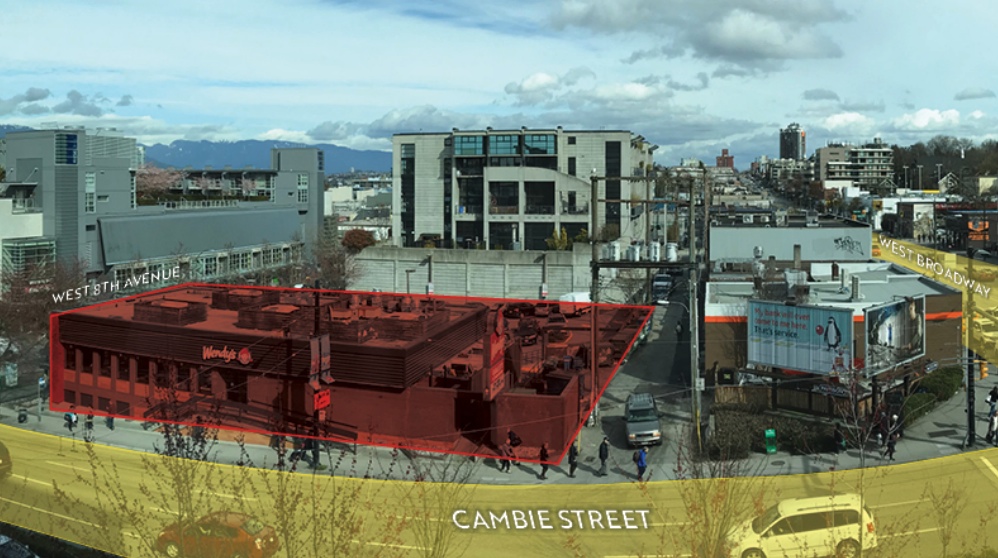 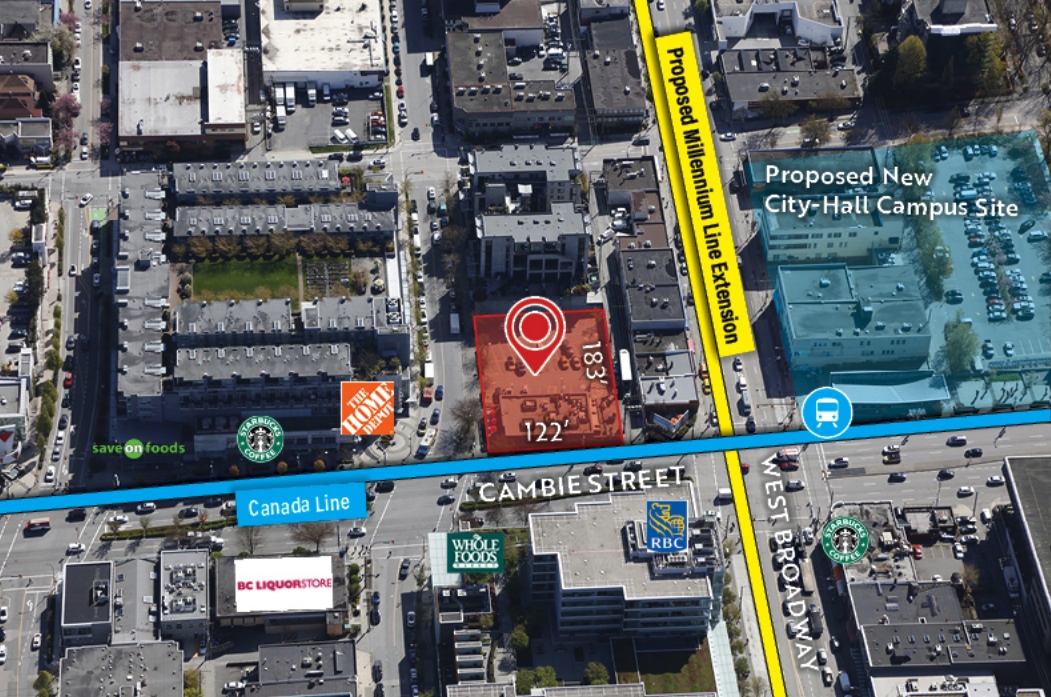 But, of course, what sets this property aside is its location at the “epicentre of activity.”

It is one of the largest under-utilized parcels near the intersection, where the Canada Line’s Broadway-City Hall Station entrance is located.

And by the mid-2020s, the transit station is slated to become a part of Metro Vancouver’s largest transit interchanges with the opening of the underground Broadway Extension of the Millennium Line to Arbutus Street. The area will have a Millennium Line subway station, which will include a direct underground connection to the Canada Line platforms and possibly multiple entrances from the ground level.

The Millennium Line extension is expected to become an immense catalyst for redevelopment and economic activity along the Broadway Corridor, especially at this particular intersection where two SkyTrain lines meet and provide access to downtown and far-reaching corners of the region.

Additionally, the City of Vancouver plans to significantly expand its City Hall campus to the entire south side of the 400 block of West Broadway – just across from the corner restaurant site listed for sale.

With the expectation of the Broadway Extension, a number of redevelopments are already planned for the immediate area, including a seven-storey retail, restaurant, and office building at 510 West Broadway (northwest corner of the intersection of Cambie Street and West Broadway) and a nine-storey office building at 525 West 8th Avenue (diagonally across the intersection of Cambie Street and West 8th Avenue from the Wendy’s site). 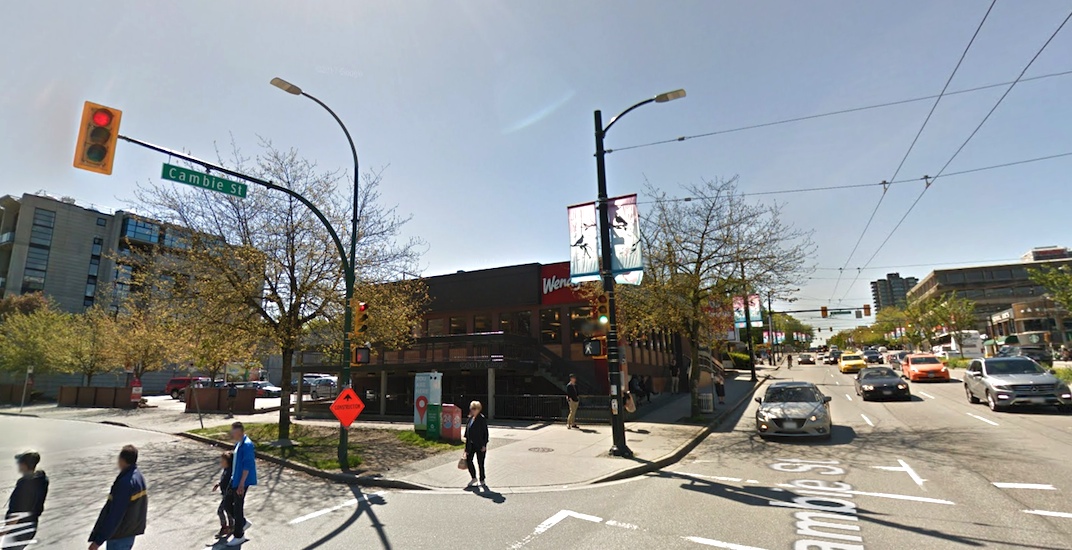 According to CBRE, the big downward slope from West Broadway towards West 8th Avenue could potentially allow for two storeys of retail to have ground-level entrances, similar to Home Depot.

Existing zoning allows for office and residential in the levels above the retail, but the allowable redevelopment potential from rezoning could be significantly greater once the municipal government completes its Broadway Corridor Plan in the advent of the arrival of the Broadway Extension.

As well, there could potentially be more creative and flexible development opportunities if the billboard and single-storey retail properties between 433 and 497 Broadway – the properties south of Wendy’s across the laneway, including the recently opened A&W restaurant – are acquired by the same buyer.

The Wendy’s property’s latest assessed value by BC Assessment is $39.53 million.