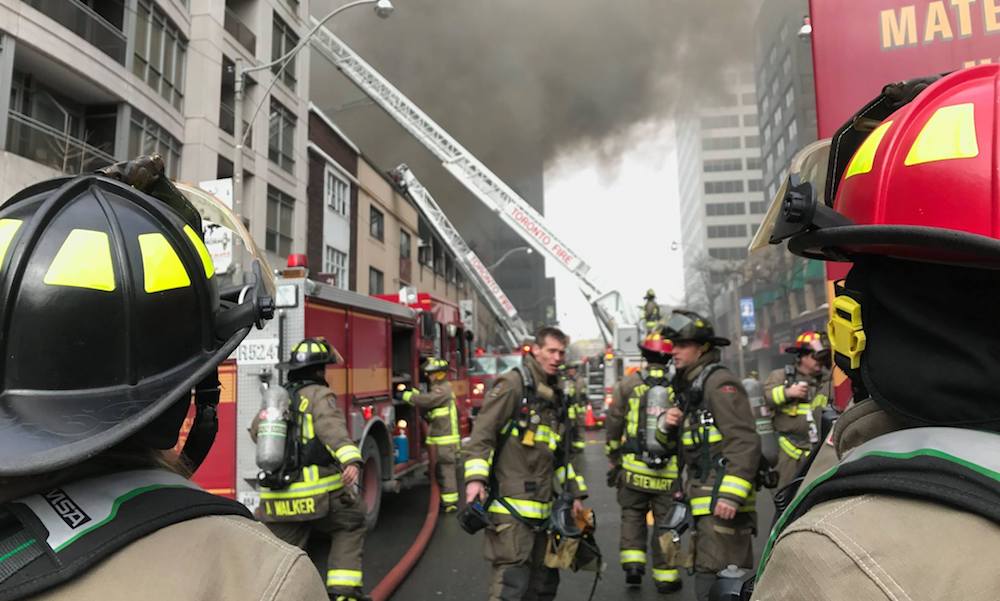 It took Toronto Fire Services more than five hours to put out the massive blaze at the Badminton and Racquet Club on February 14.

There were no major injuries reported, but conditions worsened as smoke filled the air, and the building’s roof partially began to collapse.

The fire brought the intersection of Yonge and St. Clair to a standstill, as over 100 firefighters arrived to battle the blaze situated at 25 St. Clair West.

Just before rush hour, it appears the intersection will remain closed, and the TTC continues to bypass St Clair Station.

UPDATE: Subway service on Line 1 continues to bypass St Clair Station both ways due to an ongoing fire investigation at St Clair and Yonge.

But the fire has been contained, according to Toronto Fire Chief Matthew Pegg.

“At this point, the fire is contained at that building. But again, we’re in defensive operation and our principle objective now will be to do everything we can to make sure the fire doesn’t spread to adjoining structures,” Pegg told reporters.

It is not clear how many buildings were evacuated, and the cause of the fire is still unknown at this time. But Pegg did confirm one fire fighter had a minor injury, although was not required to be transported to a hospital.

Pegg called the fire “very difficult” and “very complex” in nature due to the building location and structure.

The building itself was built in the late 19th century, and is a former TTC streetcar carhouse, according to TTC’s Brad Ross.

Some history about the building that's on fire right now at Yonge and St Clair. pic.twitter.com/0BamgiivBL

Images and videos from the scene began to surface immediately, and smoke was seen as far away as St. Clair and Pharmacy.

ETA for heavy excavation equipment is 30 minutes. This will provide @Toronto_Fire better access to the seat of the fire

Massive fire across the street from my building. I’ve never seen so much smoke or so many fire trucks in my life!! Stay safe @Toronto_Fire pic.twitter.com/VCdjgOrcja

It’s still a mess up @ Yonge & St Clair. Still working on the #fire. Find alternate routes & save yourself a hassle #Toronto pic.twitter.com/yA2gsxgfNH