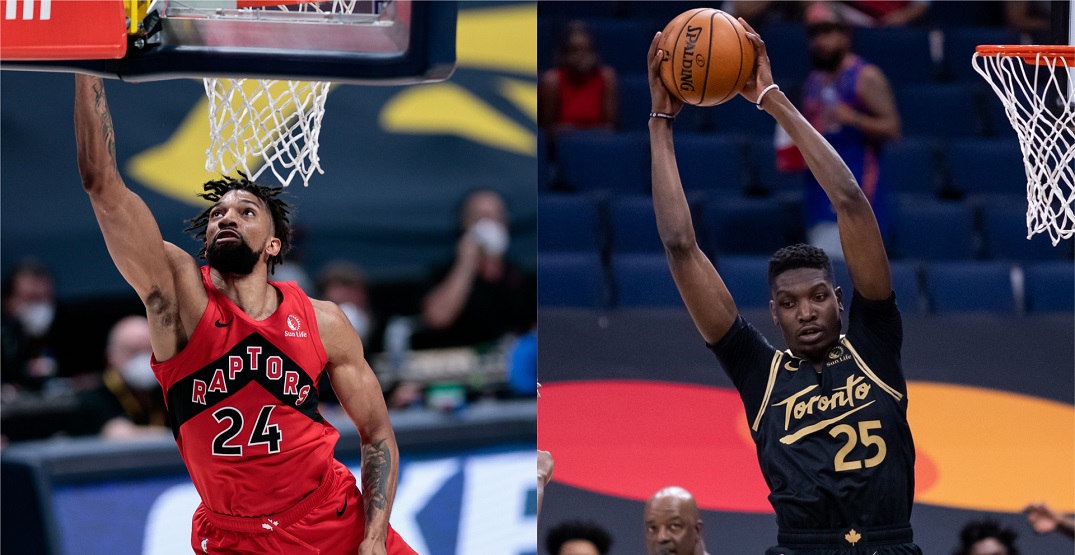 The Toronto Raptors are set to mix things up at centre this season.

A day after the Blue Jays were eliminated from playoff contention, the Raptors kick off their preseason today, starting things out against the Ben Simmons-less Philadelphia 76ers at Scotiabank Arena.

It definitely won’t be a walk in the park for the Raptors this year, as oddsmakers think they’ll miss the playoffs. The team is coming off a 27-45 season, with much of the preseason chatter focused around how there’s no Kyle Lowry on the roster for the first time in nine years.

But after the Raptors refused their option on centre Aron Baynes earlier in the offseason, it is time for a fresh start at another position on the court as well.

Baynes started his first 27 games for the Raptors last season but made just four appearances in the starting the rest of the season after notably struggling on both ends of the floor.

Between Khem Birch, Chris Boucher, and a mix of others filling in, here’s why the centre position will prove crucial to the Raptors’ playoff hopes this year:

Can Khem Birch become “the guy?”

Khem Birch came to the Raptors last season in April, after being bought out by the Orlando Magic.

But by August, Birch had re-signed on a three-year deal with the Raptors, having started 17 of the 19 games he was in the lineup.

Birch put up 11.9 points per game and picked up 7.6 rebounds a night in Toronto, a notable increase from his 5.3 and 5.1 marks in Orlando in 48 appearances last year.

Of course, it didn’t hurt that Birch was getting 11 more minutes of floor time per night – but his points per 36 minutes total jumped up from 9.6 to 14.2 after joining the Raptors.

When you compare the stats of offensive and defensive ratings – a measure of how many points the team scores and allows with a given player on the floor per 100 possessions, the difference between the Raptors’ level of play with Baynes compared to Birch begin to become even more clear.

In Toronto, both Baynes and Birch were similar defensively – Baynes at a defensive rating of 113, Birch at 112. But offensively, Birch had a rating of 123, dwarfing Baynes’ 104. Essentially, the Raptors had a +20 increase in the average point differential per 100 possessions when Birch was on the floor compared to Baynes.

But despite looking strong in his limited action last season, Birch has still started just 47 games in his NBA career to date. He’s far from a proven commodity, and the team will need his growth to continue upward if they’re looking to return to the postseason.

How much will Chris Boucher play?

Chris Boucher is one of the most veteran members of the Raptors, being one of just four remaining players from the 2019 NBA champion side. In his third year with Toronto, the big man put up 13.6 points per game and 6.7 rebounds a night over 60 games.

Boucher hit 30+ points three times last season, and hit 15 or more points on 25 occasions. When the rest of the Raptors roster wasn’t having a great night, Boucher was often able to be a rare bright spot.

But it seems like Boucher is destined to stick in a bench role rather than a starting spot. He averaged 24 minutes a night last season, eighth on the roster overall and six minutes less than Birch.

Boucher started 14 games last season, with 10 of them coming in a stretch in April. Boucher was essentially tossed into a power forward role once Birch became the regular starter, and then missed the season’s final 13 games due to injury.

Boucher’s best chance to make a strong impression this year could be right off the hop, with Pascal Siakam set to miss the first month of the season or so. If Boucher is able to hold the fort down through the team’s first 10-15 games, those crucial performances could make a big difference to the team’s playoff chances.

For when neither Birch or Boucher are on the floor, it’s yet to be clear what the Raptors will be doing. The team doesn’t have a single-player — Birch and Boucher included — currently listed over 6’9″.

Neither Birch nor Boucher are available for tonight’s preseason opener — Birch due to health and safety protocols, Boucher due to a dislocated finger.

So that leaves the door open for the team to experiment with different options. Will the versatile Scottie Barnes take a few minutes per game in the post? Or will depth players like Precious Achiuwa and Freddie Gillespie make a strong first impression?

Whatever the case, the Raptors will need a big rebound from their centre depth in order to have a successful season.