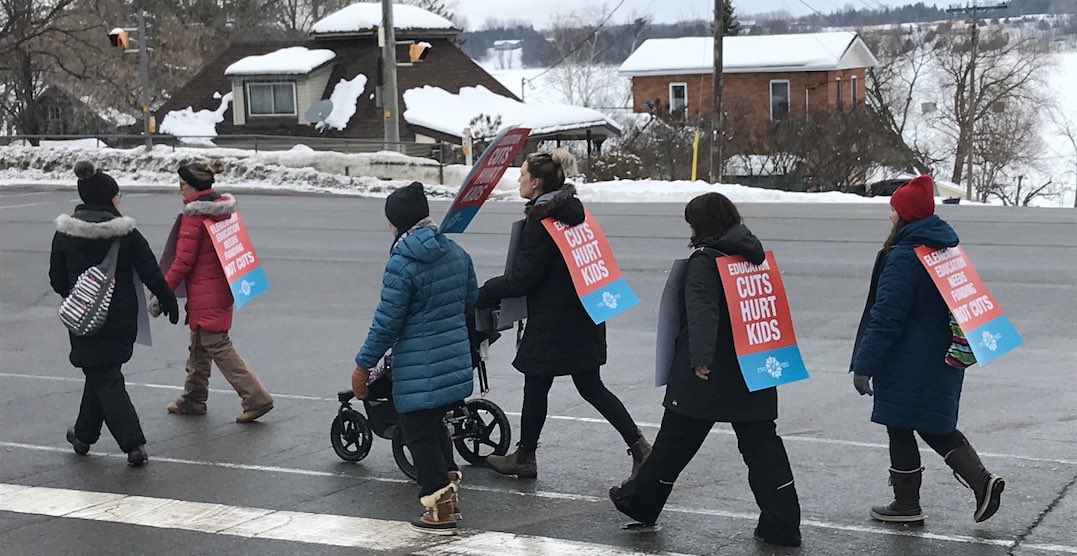 Despite negotiations resumed between the Ford government and Ontario teachers, the week of February 3 is kicking off with rolling strikes by elementary school workers across the province.

“ETFO made every effort over the past three days to move negotiations forward but it became increasingly clear that the Ford government was not willing to address key issues in any meaningful way,” said ETFO President Sam Hammond in a release.

“For example, the government wants to reduce funding to support the learning needs of special education students, and it wants ETFO to agree to those cuts at the bargaining table. We can’t do that.”

Strike action will continue into Tuesday, February 4, when education workers and teachers represented by the Ontario Secondary School Teachers’ Federation (OSSTF/FEESO) in the following school boards take part in another one-day, full withdrawal of services:

The Province of Ontario and the ETFO returned to the table on January 29 to work towards reaching a fair central agreement, and those conversations broke down late on January 31.

“The government is unwilling to make any significant efforts to address the problem of classroom violence, or to support the integration of students with diverse learning needs,” Hammond said.

Meanwhile, Education Minister Stephen Lecce announced in January that the government of Ontario will offer parents a payout of $25 to $60 if strike action closes schools or school-based child care centres.

He has previously stated that the continued strike action is unfair to students, and said the provincial government has continued to attempt to reach a deal with the teachers’ union.

“Parents have been clear: strikes by unions hurt kids and investments should go to support student success, not towards enhanced compensation,” Lecce said in a previous statement.

“We agree with Ontario parents. This is why we will continue to vigorously champion the interests of students and seek stability for parents in 2020, who are frustrated and tired of the union-led escalation that began in 2019.

“This continued strike action is unfair to students and their families.”