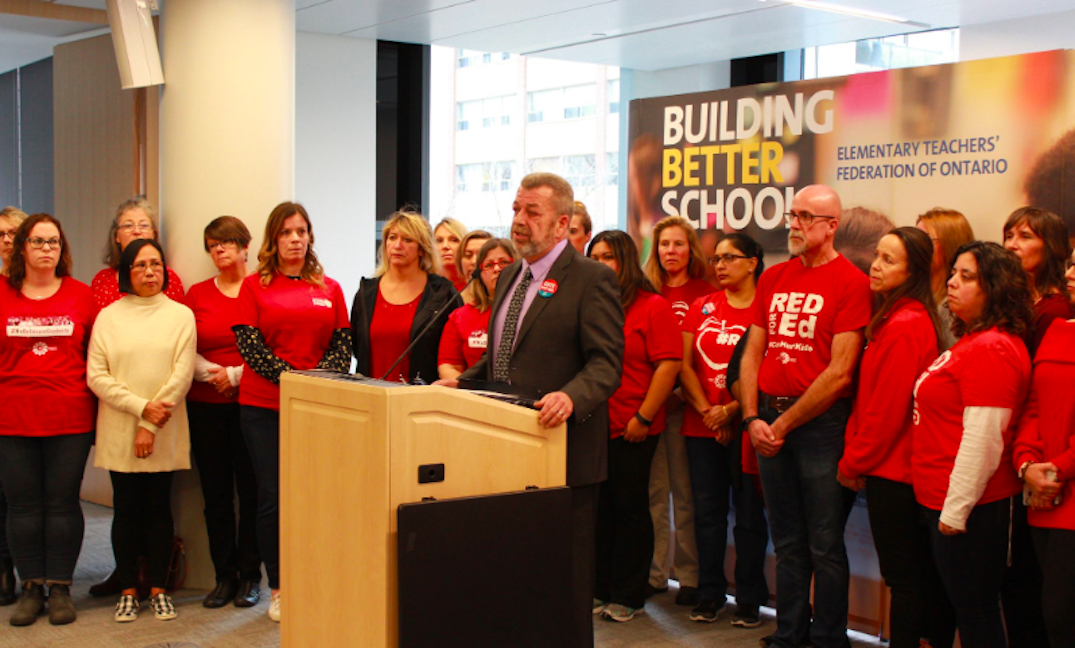 The union that represents the province’s public elementary school teachers has confirmed its members are preparing to begin a work-to-rule strike action that will begin later this month.

According to the Elementary Teachers’ Federation of Ontario (ETFO), the action would begin on Tuesday, November 26, and target ministry and school board administrative tasks.

The ETFO says there will be no impact on students.

“We are making this known well in advance to assure parents that this strike action will not affect students, their learning or their safety,” said ETFO President Sam Hammond in a statement.

“ETFO members will be withdrawing from ministry and school board administrative activities, which will give them more time to focus on working with students.”

The ETFO says it’s beginning a “series of local meetings” starting today to prepare its members for the upcoming strike action.

“Our goal is to turn up the heat on Premier Ford and his education minister, Stephen Lecce. It’s critical that they finally come to contract talks prepared to address the real issues of concern: more supports for students with special needs, the protection of Ontario’s Kindergarten program, and critical issues like addressing violence in schools,” said Hammond.

On Thursday afternoon, Stephen Lecce, the province’s education minister, said, it’s disappointing the ETFO has decided to “escalate” to a partial withdrawal of services, which he says will hurt kids.

Lecce added the province and the Council of Trustees’ Association (CTA) continue to table reasonable and expanded offers through the negotiation process, with only one interest in mind, “landing a deal that keeps our kids in class.”

“I stand with parents who know that labour action by unions hurts our students, and we will work to ensure students remain in the classroom,” said Lecce. “My negotiating team stands ready for meaningful, good faith bargaining 24/7, to reach the deals Ontario students and families deserve.”

Earlier this month, the ETFO, including 83,000 teachers and education workers, voted 98% in favour of taking strike action, if needed, in response to cuts made under Premier Ford’s government.

The mandate comes after the Canadian Centre for Policy Alternatives (CCPA) revealed data showing that this year, there will be almost 1,000 fewer teachers in grades four to eight elementary classrooms, and larger class sizes compared to last year.