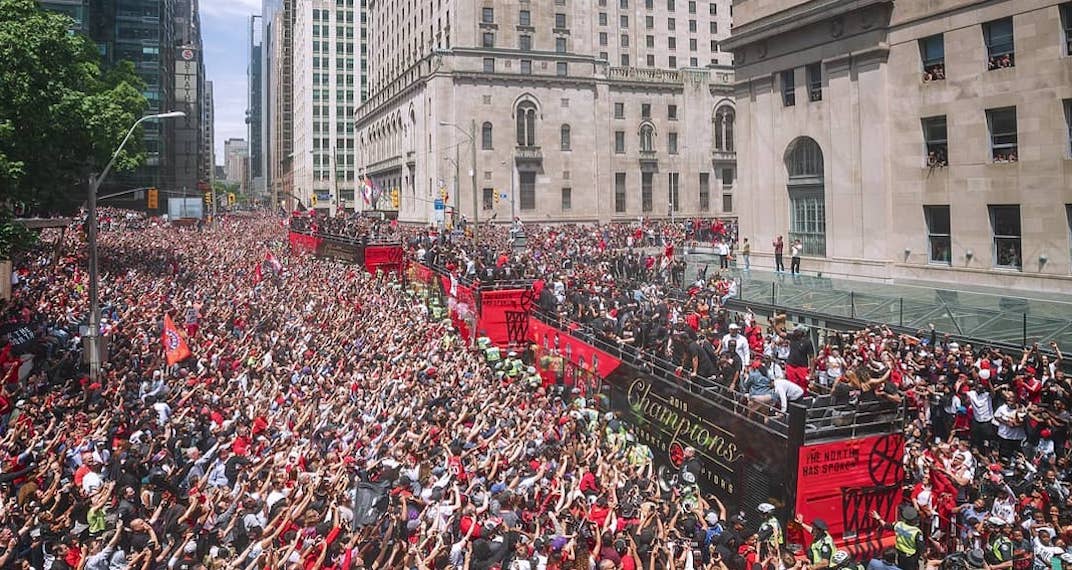 Now that the streets have cleared, the garbage has been swept up, and the city has returned to normal, it’s hard to believe the epic Raptors’ victory parade and celebrations have come to an end.

However, a quick scroll through social media will remind you that hordes of Raptors fans turned the downtown core into a sea of red as the city came out to celebrate the Raptors first-ever NBA Championship in franchise history on Monday.

Due to the large crowds, TTC routes were diverted, downtown traffic was bumper-to-bumper, cars on the Gardiner halted, and fans rallied at Nathan Phillips Square since Sunday night in anticipation of the day’s events.

The parade began at the Princes’ Gates at 11 Princes’ Boulevard at 10 am, slowly proceeding along Lakeshore, York Street and University Avenue before finishing up at a jam-packed Nathan Phillips Square.

Due to a massive turnout, the square at city hall reached capacity well before the Raptors arrived, and fans were encouraged to watch the rally at Coronation Park, York & Harbour Streets, Jurassic Park,  St. Andrew Station, and Yonge-Dundas Square.

While it was predicted that around 2 million people attended the festivities, Toronto’s chief communication officer, Brad Ross, told Daily Hive he believes there was “conservatively, more than one million.”

Ross also added he believes there were about 100,000 fans at Nathan Phillips Square and within the vicinity.

However, this doesn’t include the people watching from office or condo buildings.

Yesterday we saw millions come out to celebrate our Toronto @Raptors and the NBA championship. We saw the best of our city. pic.twitter.com/iyDxJg7DUQ

As the city and most of the Raptors team recovers from their hangover today, it’s safe to say that Monday was a day that will go down in history.