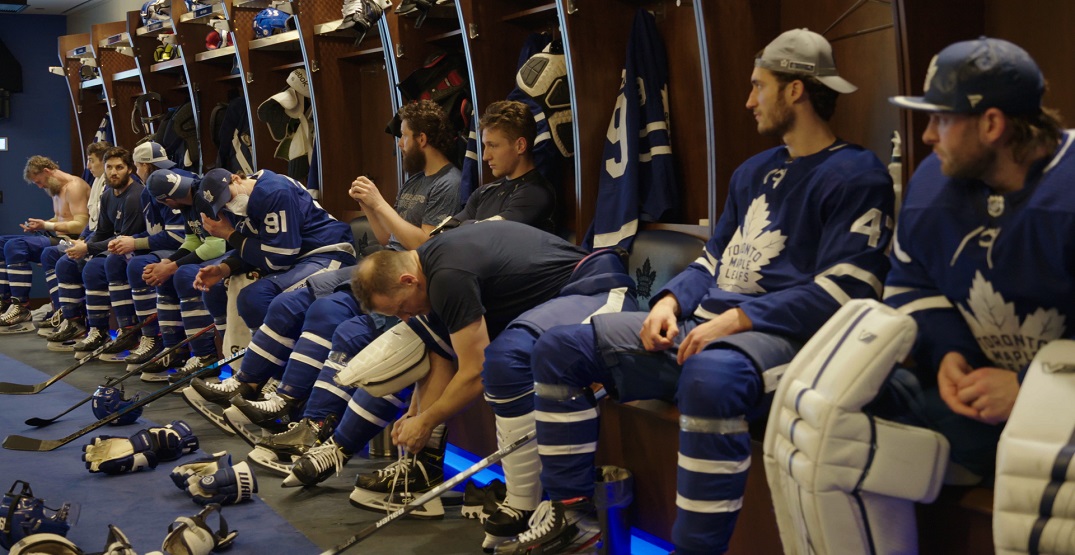 An upcoming web series documenting the inner working of the Toronto Maple Leafs’ 2020-21 season — and ultimate playoff failure — will have a little something for everybody.

At least, the NHL hopes so, as the all-access All Or Nothing: Toronto Maple Leafs series will debut on Amazon Prime Video on October 1 in a five-episode format showing fans the daily workings of the Leafs organization throughout the shortened 56-game season.

“What you are thinking of is how are you making a compelling program that the fans are just going to love, whether they like the Leafs or not. [Narrator] Will Arnett actually says it… grab a brew and get comfy,” Steve Mayer, the NHL’s Chief Content Officer said in an interview with Daily Hive.

Arnett, one of the Leafs’ most famous fans, was announced as the voice of the series earlier this summer. Mayer, who served as one of the show’s executive producers, said it was an easy sell to Arnett to be involved.

“It took the Leafs a few years to decide that they’re going to do the series,” Mayer said. “It took Will a few seconds to decide to be the voice of the series.”

The Leafs’ place as one of the league’s most beloved — and despised — teams made Toronto a natural fit for the first edition of the All Or Nothing brand that focused on an NHL team.

“It was Amazon that really wanted the Toronto Maple Leafs,” Mayer said, adding that the conversations about the NHL’s involvement initially started a few seasons ago. “When you do these series, you’re out to document what really happens. You hope, at least if you’re a Leafs fan that you’re going to be documenting a Stanley Cup[-winning] season, but you never know. At the end of the day, that’s why it’s called All or Nothing.”

Of course, the Leafs fell short of their championship goal, being upset in the first round by the eventual Stanley Cup finalist Montreal Canadiens.

Mayer said one of the league’s biggest challenges is making a story compelling for people that may have already been closely following the Leafs throughout the season.

The show’s final episode documents what was the biggest turning point in the Leafs’ season — captain John Tavares’ injury in the first period of Game 1 of the series against the Canadiens that sidelined him for the remaining six games.

“One of the difficult parts with doing a series after the fact is so many people have seen so much of the footage and heard so much about a certain incident. It was a fact that John Tavares got injured on that play,” Mayer said. “But what are those moments that makes that injury more compelling and interesting to somebody who thinks they’ve seen it all? And how did that injury affect the team?”

Mayer said his role as an executive producer in the series brought challenges to figure out how to document a Leafs series that saw both the team’s first division title in two decades followed up by a fifth consecutive disappointing playoff exit.

“I do think that you’re just trying to put together an episodic series that correctly shows what happened during the year, the good, the bad, the ugly,” Mayer added. “Especially in that last episode… man, you see that this team just wanted to win so badly.”

Mayer credited the Leafs’ players as easy to work with throughout the series.

“I do think the players have grown to trust the fact that, you know, we, as producers… we want to show the NHL in a really cool light. And all-access shows do that,” Mayer said. “They had their guard down at times and we got to see who they truly are.”

Leafs players themselves have said the show will offer fans a chance to get to known them on a personal level a bit better.

“I think it just shows that we’re human,” Leafs forward Mitch Marner said in a release about the series. “We’re at work, just like everyone else, living our lives, and dealing with our families. We go through a lot of ups and downs, just like everyone.”

“I hope that they show the positivity, and the way the group has come together in these very strange circumstances,” Dubas said in a release.

Mayer said that the use of creative camera angles from the film crew — some of which were controlled remotely to minimize person-to-person contact — allowed the series to film footage in “places that we might not normally have been able to go in.”

“You kind of just get used to it, but it is pretty cool, too,”  goaltender Jack Campbell said. “You know, the guys [TV crew] are awesome. And super, super friendly. They’re respectful of our space.”

For head coach Sheldon Keefe, there was some initial worry that it’d reveal too much about a team as the season is ongoing. But once Keefe learned the series would be coming out after the year was done, he embraced the opportunity for the Leafs to be featured.

“I really just recognized it as an opportunity for hockey fans, first of all, to get an inside look at our organization, and what we felt had the potential to be a really great season, one that people would want to follow,” Keefe said.