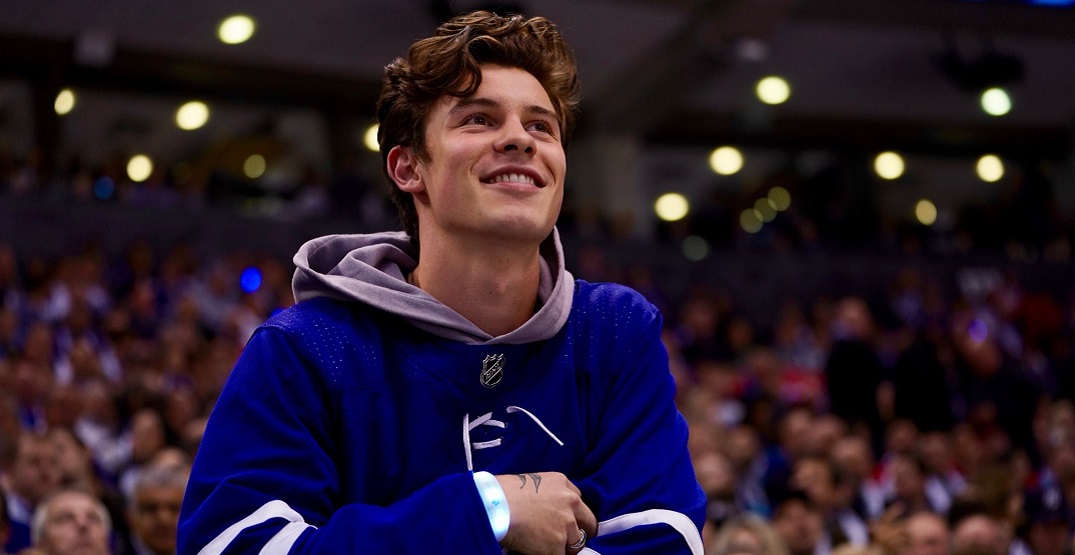 It’s no secret that a number of celebrities are fans of the Toronto Maple Leafs.

With arguably the NHL’s largest fanbase, the Leafs have attracted some of the world’s biggest celebrities to come cheer for them.

Here’s a list of some of the biggest names that love the Blue and White:

Born in Stratford, Ontario, Bieber played rep hockey while growing up, and his love for the Leafs has been on display with his frequent appearances at home games.

Having practised with the team way back in 2013, Bieber even released a “love letter” to the Leafs in a music video earlier this year.

As he’s now good friends with Auston Matthews and Mitch Marner, it’s likely he’ll be back at Scotiabank Arena sooner rather than later.

The star of The Matrix, John Wick, Speed, and many other action classics, Keanu Reeves actually first developed his reflexes as a hockey goalie while growing up in Toronto. Reeves even has his own page on EliteProspects, and was offered a tryout with the Windsor Spitfires.

At the @JohnWickMovie premiere, Keanu Reeves catches up with @ArthurKade to talk playing hockey as a child in Toronto and more! #JohnWick3 pic.twitter.com/lKljufI3OU

Reeves eventually chose acting over the hockey route, but with his career success, it’s hard to blame him.

Canadian WWE star Edge has been known for his antics in a wrestling ring, but growing up in Orangeville, Ontario, it was all about hockey for him as a child.

“There’s a mood in the house, and it shifts one way or the other depending on how the Leafs are doing,” Edge’s wife, Beth Phoenix, said in a 2020 feature.

Chris Hadfield set a record back in 2013 where he became the furthest Leafs fan away in history.

Hadfield actually once “dropped the ceremonial puck” from space prior to a game against the Buffalo Sabres.

Hadfield was even wearing a Leafs shirt back on his descent to Earth from a mission at the International Space Station during the Leafs’ infamous Game 7 collapse to Boston back in 2013, coming back to Earth and immediately asking his wife about the game’s score.

The man known for playing Anakin Skywalker in the Star Wars franchise is a self-described “massive” Leafs fan. Born in Vancouver, Hayden Christensen said in a 2018 interview with Intelligencer that his sporting ties lie with Toronto, whether it be the Leafs, Raptors, Jays, or Toronto FC.

The narrator of the upcoming All or Nothing: Toronto Maple Leafs series, Arnett has been a fixture at Leafs games whenever he’s been in town. Born in Toronto, Arnett once hilariously said hey to Mitch Marner in the middle of a post-game interview.

A friend of Arnett’s, the star of Austin Powers and Shrek has also been one of the most longstanding public Leafs fans. If the 2008 film The Love Guru about the Leafs’ Stanley Cup draught didn’t show you that, in his movie Austin Powers in Goldmember, a fake news ticker reads “Maple Leafs win Stanley Cup” during a broadcast.

No joke, we've got comedy royalty in the house tonight.#LeafsgoBrách☘️ #LeafsForever pic.twitter.com/yY1kI8MRov

The former national news anchor for CBC, one of Canada’s most iconic TV voices in Peter Mansbridge has always shown love to his Leafs over his career spanning five decades.

Sometimes known for interviewing celebrities rather than being thought of as one, Mansbridge and his family have been Leafs fans ever since moving to Canada from London, England.

Down at the old Maple Leaf Gardens today — damn this guy was good. pic.twitter.com/w8v5T9ndrn

Mansbridge even livetweets the games just like any other diehard fan, making fun of Toronto’s underperforming power play last season.

Have the Leafs thought of refusing power plays?

Pickering native Shawn Mendes sold out the Rogers Centre for a concert back in 2019, but he’s also been one of the most well-known celebrities to find himself mingling amongst Leafs fans.

We don’t want to be holding @ShawnMendes back so we had @Cujo hook him up with a new sweater.

The 2019 US Open champion, Canadian tennis star Bianca Andreescu has always been known to rep Toronto wherever she goes. Andreescu came out back in 2019 to drop the puck for a game against Boston.

Good win for @MapleLeafs against Boston the other night!!! Super happy that I was able to do the puck drop and come out to support you guys!! Keep on killin’ it 🙏🏽🥳 #MapleLeafs #NHL #HockeyNightinCanada pic.twitter.com/tnGi82zM34

Born in Newmarket, Ontario, and growing up for parts of his childhood in Scarborough, actor Jim Carrey has never been shy about his love for the Leafs.

Back in 2014, Carrey even wore a Leafs jersey on set while hosting Saturday Night Live.

Props to @JimCarrey for representing @MapleLeafs on @nbcsnl pic.twitter.com/eHmExBgZ6h