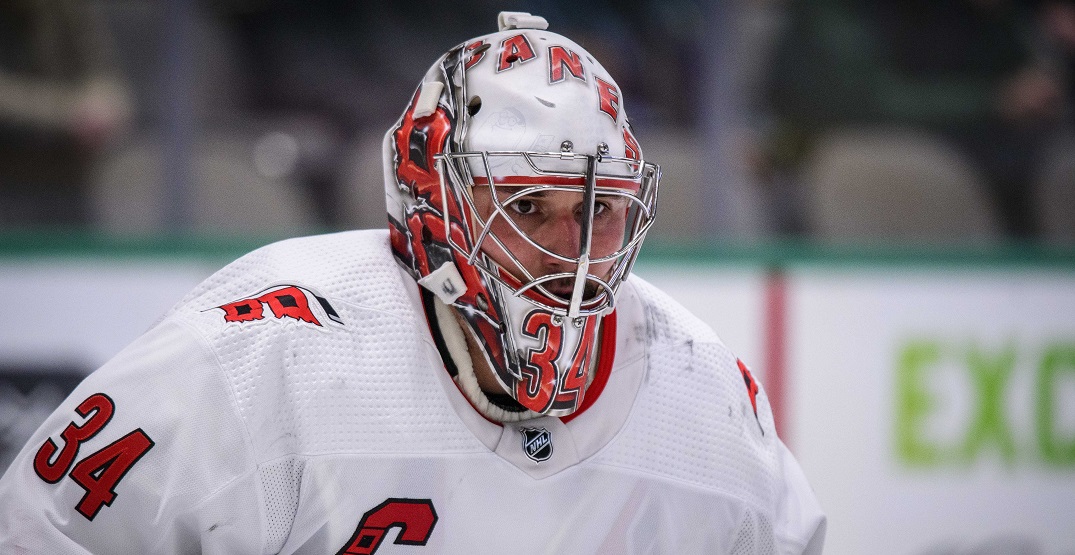 The Petr Mrazek era in Toronto is just over two months away from officially beginning.

Signed this offseason to a three-year, $11.4 million contract, the Maple Leafs’ commitment to the 29-year-old Czech goalie is quite clear.

Drafted in the fifth round back in 2010 from the OHL’s Ottawa 67s, Mrazek has an impressive NHL career, playing 277 games with Detroit, Philadelphia and Carolina.

But just what are the Leafs getting in Mrazek? And what’s led to him moving across three franchises in his nine-year NHL career?

Oddly, the Leafs are the first NHL team to commit to Mrazek for three seasons at a time.

Based on familiarity with the Leafs, Jack Campbell is expected begin the season as Toronto’s starter in big matchups.

But based on the Leafs’ commitment to Mrazek, for better or for worse, he’s bound to end up with a significant chunk of starts as well.

“We felt we needed to find a strong partner for [Campbell], so we could have the strongest tandem possible,” Leafs GM Kyle Dubas said last month of the Mrazek signing. “We felt we achieved that with Petr Mrazek.”

Campbell, who is also on his third team, has never started more than 25 games in an NHL season. Mrazek has never topped 49 starts himself. It’s likely the competition for playing time will be on all season long, though that’s nothing foreign to Mrazek.

Petr Mrazek, signed 3x$3.8M by TOR, didn't play enough for a card this year, but he has a solid track record. He also saved 9.2 goals above expected in 12 games this season, which is probably not sustainable. #LeafsForever pic.twitter.com/VCky2noGpr

It took until November 2014 before Petr Mrazek became an NHL regular, suiting up for 29 games in the 2014-15 season behind Jimmy Howard.

“Petr Mrazek was a hot prospect from the start,” host of the Red Wings-themed Winged Wheel Podcast Ryan Hana said in an interview with Daily Hive. “He’s very flashy, he’s got lots of athleticism, lots of raw talent.”

That year, Mrazek earned the net for Game 1 of the first round against the Tampa Bay Lightning.

In seven games, the 22-year-old put up a .925 save percentage, including a pair of shutout wins, against a 108-point team that would eventually play in the Stanley Cup Final.

“He’d make like a freak save and then go on a run where he’s almost beating Tampa,” Hana added.

It became clear that the Wings’ staff  wasn’t always willing to give Mrazek more playing time, despite his success and Howard’s struggles. Howard started Game 1 and 2 of the first round of the 2017 playoffs against the same Lightning team that Mrazek had done well against a year prior.

The Red Wings lost both games.

Mrazek put up a sixteen-save shutout performance in Game 3, though Tampa Bay ultimately bounced Detroit out of the playoffs in five games.

The “goalie of the future” label for Mrazek was suddenly being wiped away, and the writing was on the wall for his eventual departure.

“It all culminated in the Red Wings leaving [Mrazek] exposed for the Vegas expansion draft in June 2017,” Hana said. “Everyone was expecting to protect Mrazek over Howard due to his age and contract.”

Now on a two-year, $8-million contract, Mrazek struggled to find his form, putting up save percentage marks of .901 and .910 in what would be his final seasons in Detroit.

Prior to the trade deadline in 2018, Holland ended up flipping Mrazek to the Philadelphia Flyers for two draft picks.

“The reason Mrazek left Detroit was because he was more and more disgruntled over time… because by all rights, he should have had the net over Howard,” Hana added.

Mrazek made just 17 appearances as a Flyer. With an .891 save percentage in Philly, the market for Mrazek had suddenly dried up.

He signed just a one-year, $1.5 million deal with the Carolina Hurricanes in the summer of 2018, a far cry from the long-term deal he was likely expecting with Detroit.

“It was definitely a prove-it contract,” Canes Country writer Brett Finger said in an interview with Daily Hive.

Mrazek started off his Carolina tenure with a .901 save percentage in his first 16 starts, with a 6-6-1 record while splitting the net with Scott Darling and former Leaf Curtis McElhinney.

But once January 1 came, Mrazek went 17-6-1 with a .922 save percentage over the rest of the year to help propel Carolina into the postseason for the first time since 2009.

“[Down the stretch], he was outstanding,” Finger said. “Petr Mrazek played a huge, huge role in Carolina making the playoffs that year.” 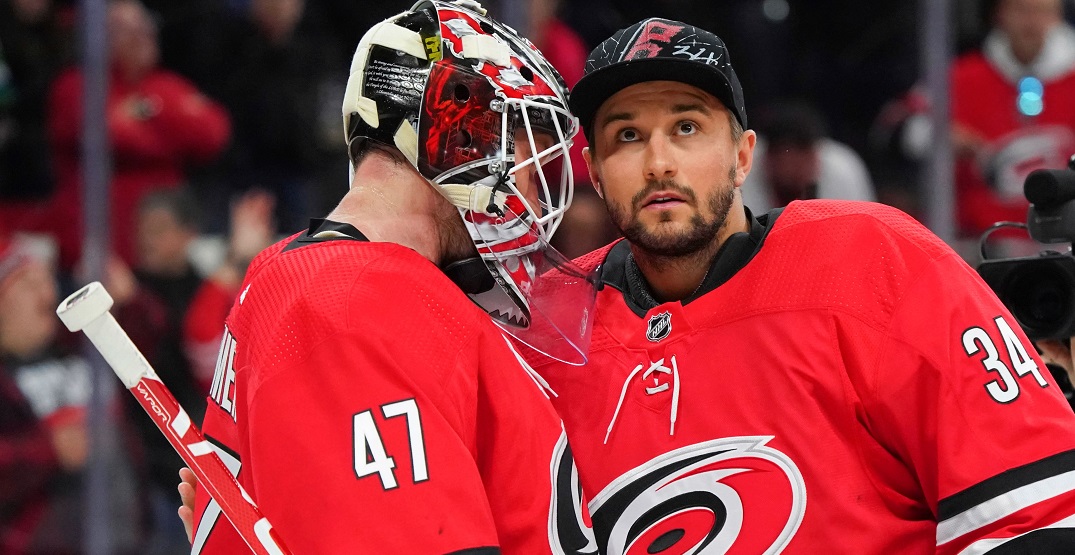 In the 2019 playoffs, Mrazek started all seven games in the team’s first round win against defending Stanley Cup champions Washington, including a double-OT Game 7 victory.

Mrazek left Game 2 against the New York Islanders in the second round of the playoffs with an injury.

With the Hurricanes able to sweep the Islanders, Mrazek was healthy enough for Games 1 and 2 of the Eastern Conference Finals against Boston, but let in ten goals in two games and was pulled for the rest of the series.

Mrazek signed another two-year deal, this time at just over $3 million per year.

In the 2019-20 season, Mrazek posted just a .901 save percentage in 40 games, splitting time mainly with another ex-Leaf, James Reimer.

Carolina was having an internal goalie battle of their own, with youngster Alex Nedeljkovic now in the mix.

In the shortened 2021 season, Nedeljkovic managed 23 starts, Reimer 21, and Mrazek just 12 as he battled more injury trouble throughout the year, missing all of February and March with a thumb injury.

Mrazek looked strong again, with a .923 save percentage and a 6-2-3 record. Unable to reach an extension with Carolina this past year, Mrazek again found himself unwanted by another NHL team.

“I wish I had a good answer why [Carolina moved on from all three goalies],” Finger said. “I have no idea.”