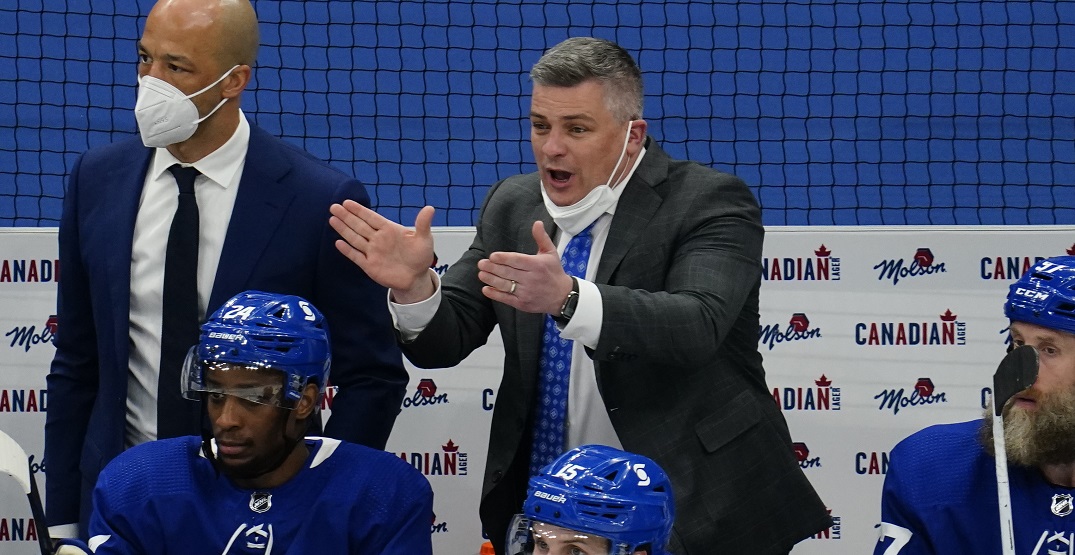 Toronto Maple Leafs head coach Sheldon Keefe has got a lot on his plate these days.

The Leafs began their preseason this past weekend, in what’s shaping up to actually be Keefe’s first full 82-game season behind the team’s bench after being hired in November 2019.

He’s coached just 103 regular season games (and 12 postseason games) since getting the job.

But of course, it’s not preseason success, or even regular season success that Leafs fans are hungry for. The Leafs won their first division title in 21 years last season, and centre Auston Matthews won the league’s Rocket Richard Trophy as the NHL’s top scorer.

None of that really matters to the Leafs’ fanbase, though, and Keefe has to know it. In an interview with Daily Hive, Keefe detailed his feelings on last year’s season and his expectations for this year.

The Leafs’ new All or Nothing series is launching on Amazon Prime Video this Friday, giving fans an opportunity to look at the day-to-day of what Keefe and the rest of the team got up to over the course last season.

“The show is about the emotion and the ups and downs and the ride and journey and going throughout the season,” Keefe said.

Ultimately, the main thing anyone could wonder is how Toronto managed to possibly lose a seven-game playoff series against a Montreal team they’d beaten seven times in 10 tries over the course of the regular season.

“With [letting Amazon film the show] comes great risk because you never know how the results are going to go and and when they don’t go well there’s going to be a great level of emotion that’s going to be shown,” Keefe said.

A Leafs team that had looked so dominant for much of the regular season saw their campaign come to a familiar end, failing to win a playoff round for the fifth consecutive season. It didn’t do the team any favours that they coughed up a 3-1 series lead, failing to close out the series on three occasions.

Matthews and linemate Mitch Marner were the talk of the North Division for much of the season, putting up 66 and 67 points respectively to both finish top-five in league scoring.

In the playoffs, that was a different story, with Matthews scoring just once, while Marner failed to hit the back of the net. No forward other than William Nylander (five goals) and Jason Spezza (three) scored more than once for the Leafs against Montreal.

Matthews and Marner drew the brunt of the criticism for the Leafs’ loss, but many critics wondered it’d make sense for Keefe to split the pairing for Game 7 up given that they combined for just one goal through the series’ first six games.

Keefe said the injury to John Tavares in the series’ opening game made it “all the more challenging” to change their lines.

“The duo of Marner and Matthews had been so dominant all season long for us, and really had carried us through a lot of the season,” Keefe said. “The thought of changing that at a time when we needed them the most was not the most appealing, especially with the absence of  Tavares.”

Keefe said he’d hoped the top line would find the chemistry they’d been able to generate during the year, saying that it never made sense to split the pair when the team was riding high.

“In the regular season, we’re trying to secure first place and we got Matthews and Marner that are tearing the division apart,” Keefe added. “It’s difficult to split them up to or to try things differently, but, you know, hindsight is easy to do.”

Ultimately, Keefe said he can’t spent “too much time” reflecting on last year.

Much of the All or Nothing series documents players like Joe Thornton, Zach Hyman, Frederik Andersen, Zach Bogosian, and Nick Foligno — all of whom have moved to new destinations for this upcoming season.

“We lost some personalities that really added a lot to our team and helped our group last season and we really saw a benefit in that,” Keefe said. “We missed the guys that are no longer here of course because they were great people and great players for us.”

But Keefe said that he’s trusting in his core players, and hopes that they’re able to take lessons they’ve learned from the departing veterans.

Regardless of how last season went, Keefe is still grateful for the opportunity to look back on a season and what nuggets were made available for hockey fans to see in the All or Nothing series.

“You’re pointing to five episodes… It’s not a true reflection of the process of the journey and who you are and all those kinds of things,” Keefe said. “But there certainly are things that I’m able to see in the moment in the heat of the moment the intensity and the emotion of it that I’m able to pull out of and make some determinations about how I really handle it in the future.”

“We’ve added additional depth,” Keefe said. “We like that. With the group that we have, we are excited to keep going.”

The Leafs’ season kicks off on October 13 against the Montreal Canadiens.