According to Santé Quebec, confirmed cases across the province have climbed over the 600 mark and four people have died as a result of the COVID-19.

“Of course, I wish to offer all my condolences and sympathies to the people close to those people,” he said.

Santé Quebec said the province has 628 confirmed cases, 1,888 cases that are “under investigation,” and 11,211 negative tests.

Regionally, Montreal has the highest number of confirmed cases in the province with 265, followed by Montérégie with 66, and the Lanaudière region with 50. 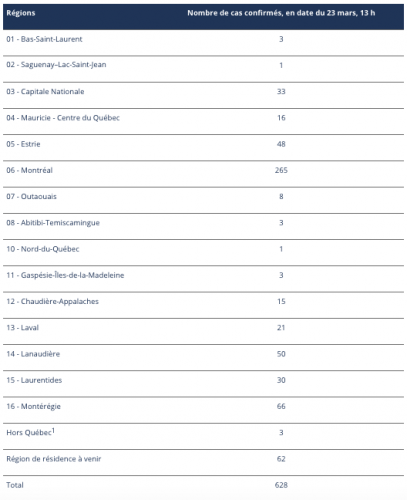 As of Monday morning, all Quebec shopping malls will be closed excluding those with entrances to food stores, pharmacies, and the SAQ.

The closure will run until at least May 1, according to Legault.

All restaurant dining rooms and hair salons/grooming businesses have also been ordered to close until May 1 in addition to all schools, universities, and daycare services.