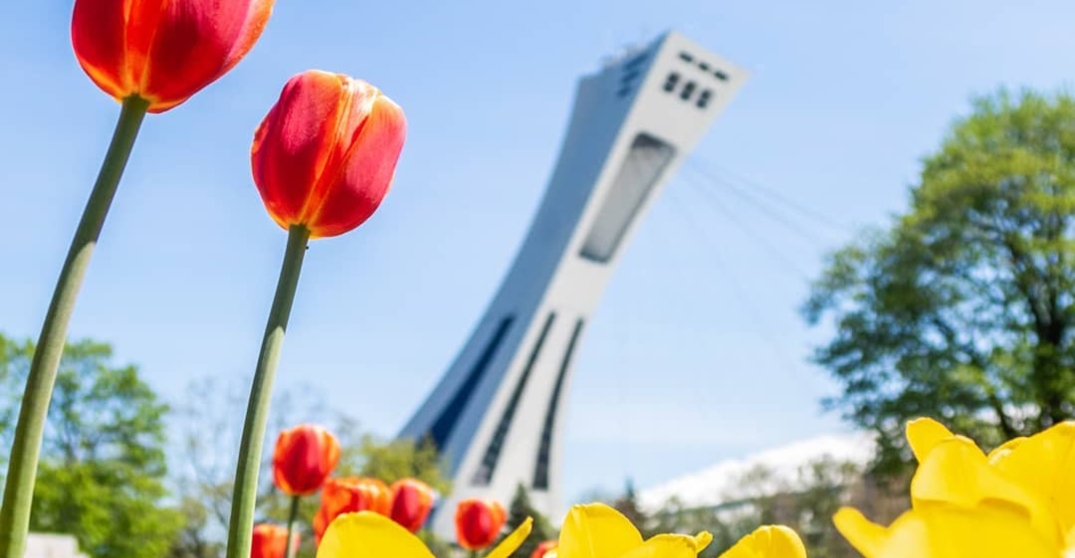 Now that Montreal is starting to feel more like Montreal, there is a bunch of iconic structures and landmarks that you have to check out.

The city is full of iconic buildings and symbolic sights that help to define Montreal’s culture. Not to mention a bunch of spectacular photo opportunities as the weather turns to toasty.

We’re focusing exclusively on structures here and will keep restaurants and bars out of this one.

Hop on a bike or tighten those shoelaces, here are 13 landmarks in Montreal that have to be on your radar at some point this summer.

Mont-Royal, the three-peak mountain from which Montreal gets its name, is arguably the most popular spot amongst tourists and locals alike.

The mountain is made of three peaks: Mont-Royal at 764 feet above sea level, Outremont at 692 feet, and the Westmount Summit at 659 feet.

Whether you’re going for a hike, a view, a park, or to smoke Tam-Tams, Mont-Royal is one of the most picturesque sights on the entire island and it’s an absolute must-see.

Construction of the Notre-Dame Basilica began in 1824 and with 11 million yearly visitors, it is one of North America’s most-visited structures.

Canada’s largest art museum by gallery space is located in the historic Golden Square Mile district of downtown Montreal, right in the middle of the constantly-busy Sherbrooke Street.

The Musée des beaux-arts de Montréal (Montreal Museum of Fine Arts, MMFA) was founded in 1860 and is as gorgeous on the outside as the exhibits on the inside.

The sign consists of fifteen letters arranged in two rows, repeated on both sides. Each letter measures roughly 15 feet in height and the neon-lit letters stand out in Montreal’s night sky. The words flash on and off in a slow rotation that lasts about 25 seconds.

One of the largest church domes in the world, Saint Joseph’s Oratory is the largest building in Montreal and a new $80 million project will renovate the 53-year-old structure to offer an unprecedented 360-degree view over the mountain of the city.

Montreal has a lot of tall structures, and La Grande Roue fits in well in that regard. It’s the tallest Ferris wheel in all of Canada. Even though it’s relatively new to Montreal’s landmark scene (it opened in 2017), it is quickly becoming a favourite with locals and tourists.

The Clock Tower, built in 1922, marks the entrance to Montreal’s Old Port and was erected to dedicate the seamen who died in World War I.

The tower is traditionally climbable but COVID-19 has resulted in visitors appreciating it from afar for the time being.

The Jacques Cartier Bridge is a steel bridge that crosses the Saint Lawrence River and connects Montreal to the South Shore. With over 35 million vehicle crossings annually, it’s the third busiest bridge in Canada, the first being Samuel-de-Champlain Bridge, just a few kilometres upstream.

The Jacques Cartier Bridge offers gorgeous views of the island, the South Shore, and beyond, and is arguably the best spot to catch this summer’s renowned fireworks display.

The Biosphere is a museum dedicated to the environment and it’s an absolutely gorgeous spectacle. Whether it’s lit up in the summer or winter, it’s a big-time emblem and photo opp.

The 75-hectares worth of the Montreal Botanical Garden is full of gorgeous thematic gardens and greenhouses and was designated a National Historic Site of Canada in 2008.

If you’re in town, it’s a must-see. It’s considered to be one of the most important botanical gardens in the world, thanks to an impressive extent of collections and outdoor exhibits.