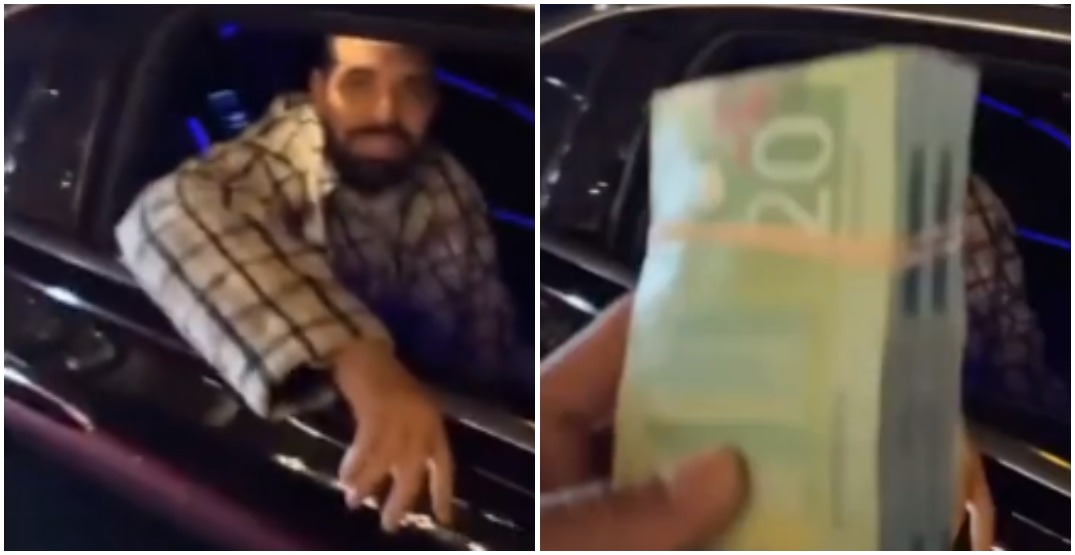 Drake is a real-life Santa Claus.

The Canadian-born rapper, née Aubrey Drake Graham, drove around the streets of his hometown of Toronto to surprise random strangers with stacks of cash on Christmas.

Drake was caught on camera by one lucky recipient on December 25. The Degrassi alum was sitting in the back of a black Maybach vehicle in the short video making the rounds on social media.

Drake gave out stacks of cash to people in Toronto for Christmas pic.twitter.com/EeFR1aWWXt

A man held onto a large stack of $20 Canadian bills as he and a woman thanked Drake for the gift. It’s unclear how much was in the wad, but it was definitely in the thousands.

“Oh my god, this is crazy,” the woman could he heard saying behind the camera.

“Thank you, bro,” the man added, as the OVO clothing founder flashed a peace sign and responded, “You already know.”

The man then added, “appreciate it you guys, take care” as Drake’s driver began to pull away.

“@Champagnepapi giving away racks for Christmas,” the person wrote over the video when they posted it to Instagram. “Life’s f**king unreal man. Legend of the city.”

Daily Hive has reached out to Drake’s reps for comment on the event and will update the story with additional details accordingly.

“How’s their a video of drake going around Toronto giving out thousands of dollars to random strangers like what part of Toronto is this cos I am clearly in the wrong part,” another hilariously wrote.

Drizzy — who was also raised celebrating Hanukkah through his Jewish mother Sandy Graham — appeared to be in an extra festive Christmas mood this year. The Euphoria producer shared a rare glimpse of his son Adonis to Instagram on Dec. 24.

In the clip, the 4-year-old can be seen climbing all over his famous pop rocking a pair of star-covered holiday pajamas. “Merry Christmas From The Gang,” Drake captioned the black-and-white post, seemingly filmed at his iconic Bridle Path home.

“Because I was building it in my hometown, I wanted the structure to stand firm for 100 years. I wanted it to have a monumental scale and feel,” Drake said of his home to Architectural Digest in 2020. “It will be one of the things I leave behind, so it had to be timeless and strong,” he also said.