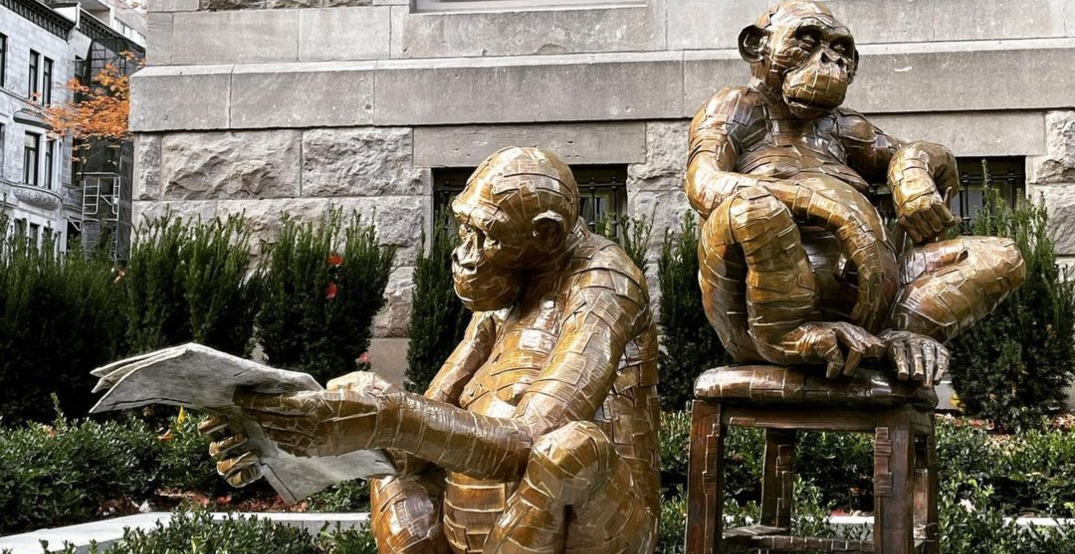 A couple of adorable new chimpanzees have set up camp in Montreal.

Happily chilling on the corner of Drummond and Sherbrooke, these bronze statues are a creation of Quebec-born artist Laurence Vallières — who specializes in large-scale creations, especially of the primate variety.

Over the summer, Vallières set up a gorilla statue in an alleyway on Wellington Street in Verdun.

The artist told Daily Hive that monkeys “represent humans” to her. “They are so close to us that it is very easy to anthropomorphize them. In this sculpture I am representing monkeys at work, in the office, having a hard time concentrating. One is reading the newspaper, the other one is just staring into the abyss.”

Vallières says having the 600-pound chimp statues placed on Sherbrooke, close to hotels, museums, shopping centres, and universities bring a “whimsical charm and softness” to her work.

Before the sculpture is finalized in bronze, Vallières says her process involves first making the structure out of cardboard and then wax.

Born in Québec City, Vallières studied visual arts at Concordia University before doing an exchange program in Los Angeles. She went on to do an artist residency in Russia, where she became influenced by street art.

Next time you’re moseying through downtown Montreal and have an itch for monkeys, you know where to go.

A few chimps for the ‘gram, maybe?