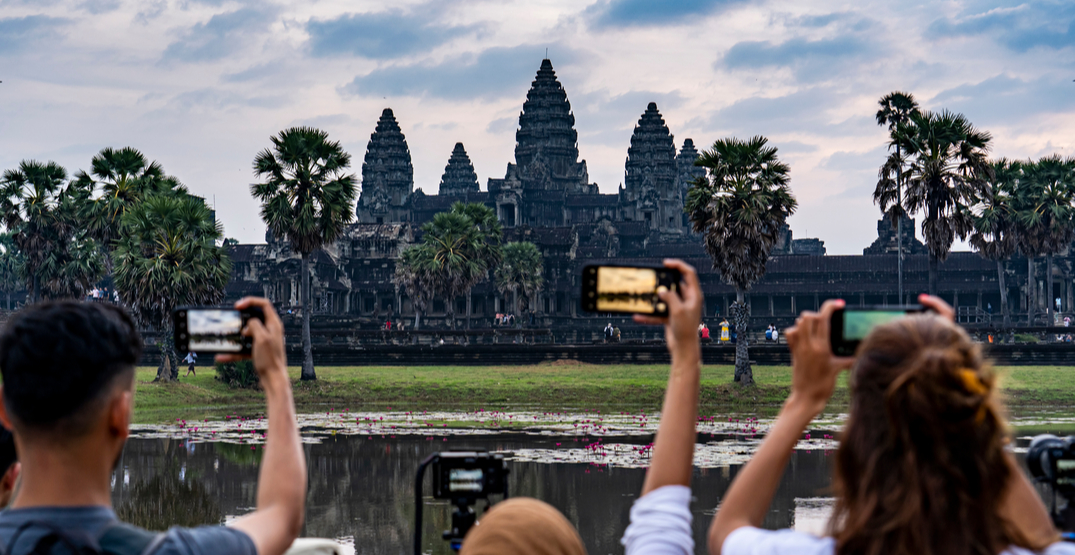 Let’s face it. Sometimes people can be the worst.

Whether you are introverted or extroverted, massive flocks of people congregated in one area is enough to stress anyone out if exposed to it for long enough.

However, people aren’t the only things that crumble — literally and figuratively — under pressure.

An increase in global travel has led to an influx of overtourism, and several of the world’s most prized treasures and attractions are suffering the consequences.

Many countries have had to implement photo bans, sanctions, and tourist taxes as a means of maintaining the wellbeing of their noteworthy attractions and sacred sites that have already experienced damage due to irresponsible tourists.

But, try as they might, the crowds continue to arrive with phones and cameras at the ready to capture the perfect pic for their #wanderlust Instagram posts.

Here is our list of 10 famous world attractions that are being ruined by tourists.

The Great Pyramid of Giza is the only one of the original Seven Wonders of the World that is still standing. However, at its current rate of deterioration, along with the Sphinx, it will soon be a distant memory. Decades of overtourism to Giza has contributed to irreparable damage to these magnificent ancient monuments. Years of overcrowding from tourists, erosion from footsteps, and even vandalism and theft have brought immense strain on the towering structures. Unfortunately, any restorative efforts have only seemed to make matters worse.

Thousands of tourists have been drawn in by the mysterious origins of Stonehenge. Although the structure itself is made of stone, it is not impermeable to damage, and many individuals have selfishly decided to break off a piece of the monument for themselves as a keepsake. The stone formation is now roped off and can only be admired from a distance, but that hasn’t stopped some particularly scummy people from crossing over anyway. Several busy roads have also been placed nearby that also threaten the structure.

One of the largest religious monuments in the world, the Khmer temple complex of Angkor Wat is a point of pride for Cambodia, so much so that it is the emblem on their flag. Year after year, the number of tourists visiting the structure grows to the point where you now have to battle hoards of people to even walk around it. Tourism is a double-edged sword for Angkor Wat, as the money that it generates is siphoned into restoration efforts. However, many have narcissistically taken it upon themselves to vandalize the intricately designed structures with graffiti.

This once entirely remote corner of the world is now facing the unfortunate consequences of overtourism. Antarctica is a particularly heartbreaking instance because it is not just one monument that is under threat but an entire continent. An influx in cruise ship traffic carrying tourists has massively contributed to water pollution, threatening the region’s coastlines as well as the variety of species that inhabit it. Additionally, with the current state of global climate change, the future of this breathtaking location remains unknown.

Known for their host of endemic species and substantial biodiversity, which notably aided in Charles Darwins’ development of the Theory of Natural Selection, the ecosystems and habitats within the Galápagos Islands are incredibly fragile. Of course, with such a unique assortment of wildlife, the islands have attracted the attention of many tourists over the years. The wildlife has been placed in such a vulnerable position that UNESCO placed the Galápagos on its World Heritage in Danger List in 2007. As a means of preserving the land and its inhabitants, a variety of sanctions have been implemented, including the requirement that all tourists and visitors be accompanied by a licensed guide when they visit the national park.

Aptly named after the colony of feral pigs that inhabit it, Pig Beach has seen the negative repercussions of having too many visitors. Tourists love to feed the pigs and watch them swim. However, the substance of the food that the pigs are eating is of great concern. Several of the animals were found dead in 2017, with many people believing the cause was tourists feeding them unhealthy food. The government has since banned visitors from feeding the creatures.

Contrary to popular belief, there is actually only one building on Santorini with a blue roof, the church. While there is no doubt that the island is idyllic and picturesque, prompting massive floods of people to visit and take a picture for the ‘gram, it is also very small. As such, thousands of people are competing for the same tiny spot from which to snap a picture of the single blue roof. The island has gone as far as to limit the number of cruise passengers arriving every day in hopes of decreasing overcrowding.

While the area surrounding Uluru — also known as Ayers Rock — is sparse, tourists continue to visit it by the busload. The red hue of the stone is undoubtedly captivating, but the immense number of visitors disregarding the rules and climbing the natural wonder has contributed to significant amounts of damage. Thousands of tourists climbing the rock have led to extensive erosion that has caused irreversible harm. Additionally, because it is situated far away from garbage cans and bathrooms, tourists have been known to relieve themselves and litter on Uluru.

Constructed nearly 2,000 years ago, the Roman Colosseum is not the magnificent monument that it once was. While it would be unfair to blame tourists for the fact that it is now a ruin, the number of visitors coming to see the structure firsthand has become so concerning that they are actually threatening the stability of the Colosseum. Millions of people from around the world visit the monument every year, and many aren’t as respectful as they should be, unfortunately, frequently misbehaving and vandalizing or stealing pieces of the structure.