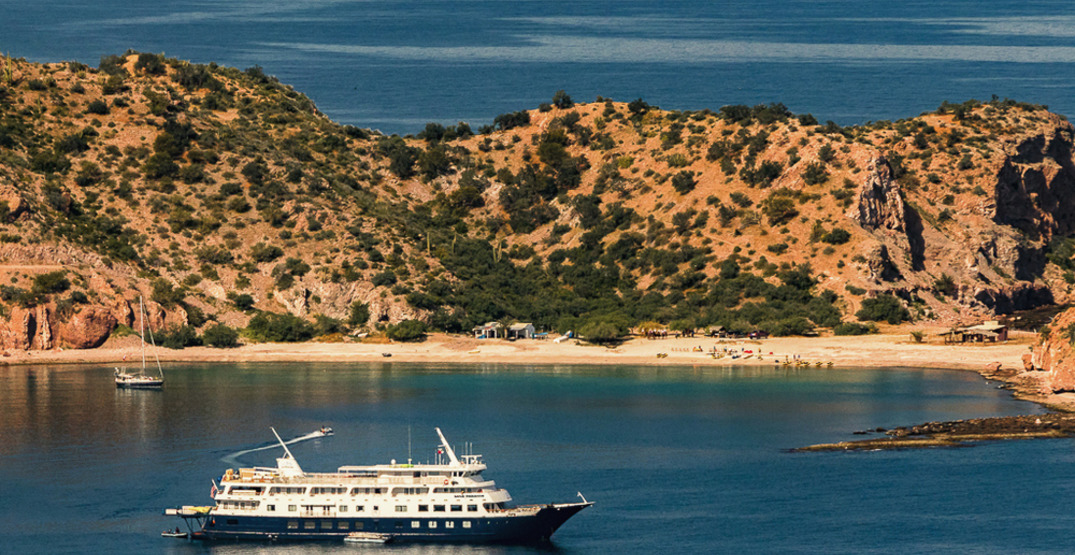 We had been told that the sea lion pups could be naughty. Snorkelling with these creatures had come with some warnings from our guides: keep the cords of your life jacket tucked in. They could try to steal your snorkel. You need to be a strong swimmer.

What I didn’t quite expect was to witness my husband literally being mounted by one — for several minutes.

He lay quite still, face down in the water, as the sea lion swam overtop him. It began by chewing on his ankles and ended with a love nip to his chest (fortunately protected by his wet suit) and a swim with him in between. 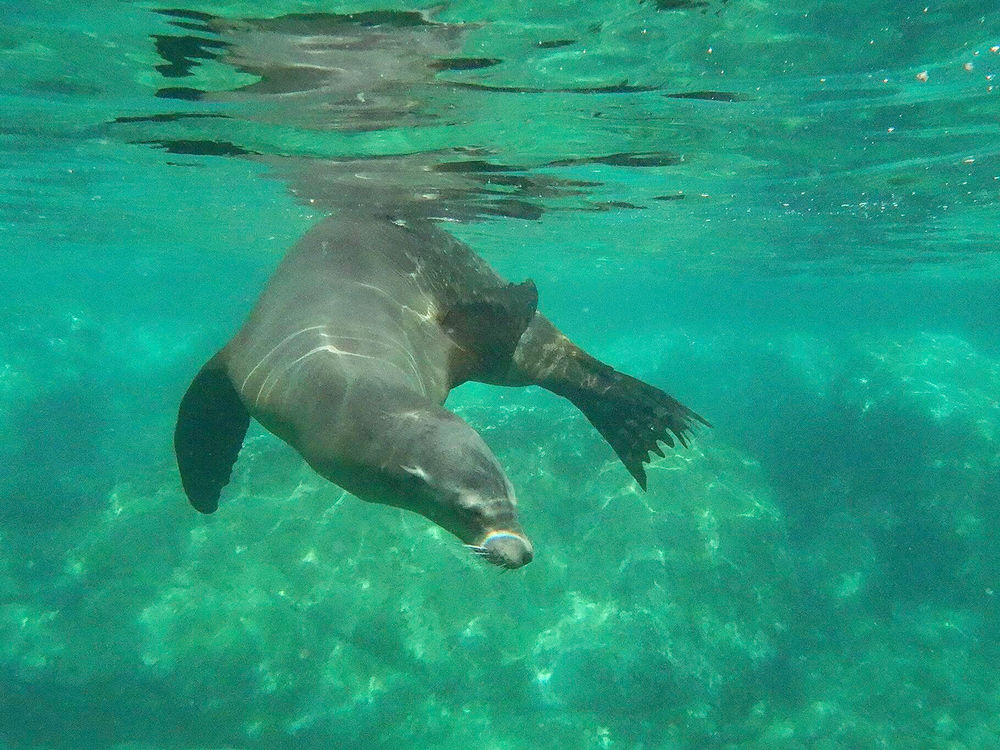 “Are you enjoying this?” I asked, slightly horrified.

It was right then and there that I learned that you could be married to someone for 19 years and still learn new things about them. Case in point, my husband likes to be mounted by sea lions.

All of this happened in the Sea of Cortez, on one of the twice-daily activities organized on our small adventure cruise through UnCruise Adventures.

But this is no ordinary small ship tour.

We were among 48 guests — and an impressive 36 staff — being guided through this UNESCO Biosphere Reserve in the Baja Peninsula, an area of Mexico that Jacques Cousteau once described as the “aquarium of the world,”  aboard the Safari Endeavour. 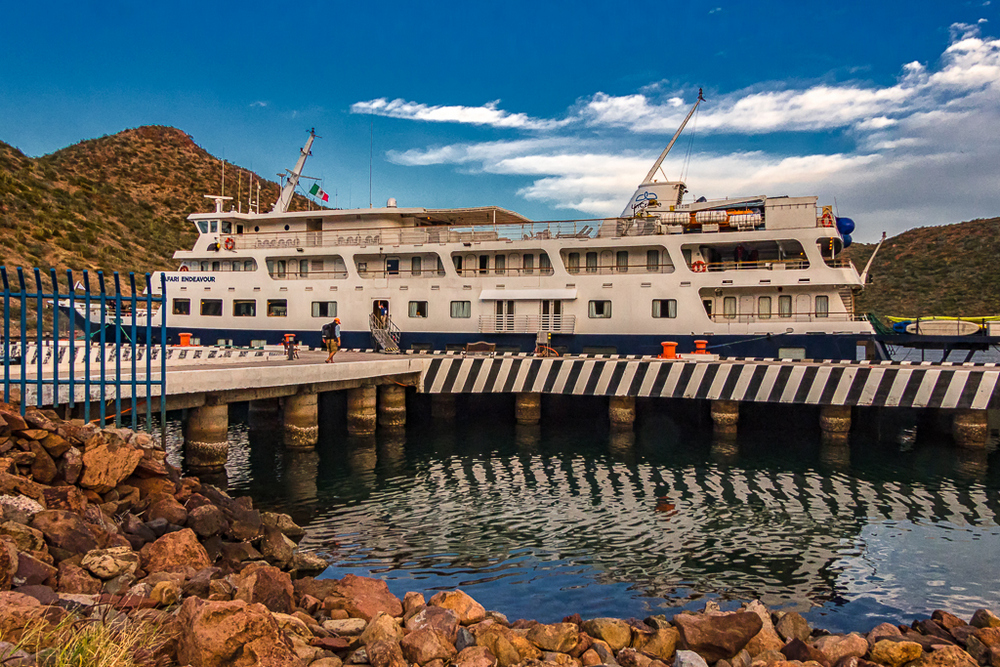 The Sea is home to over 900 fish species, nearly 5,000 species of macro-invertebrates and countless marine mammals such as sea lions, whales and dolphins, all of which we saw on our trip.

Throughout the week, we were sailing out at sea, with no ports of call, and no Internet access.

Stopping meant anchoring in small inlets to go out and “play,” which could entail snorkelling, kayaking, boulder hiking, riding a skiff to see wildlife, or riding burros on all but deserted shores.

Regardless of where you did stop to play, you would almost surely be alone.

The area is remote, and besides the occasional private yacht moored off a deserted beach, some townspeople in Agua Verde, and the Romero family who travelled for two days to bring us burros and folk songs, it was just us. 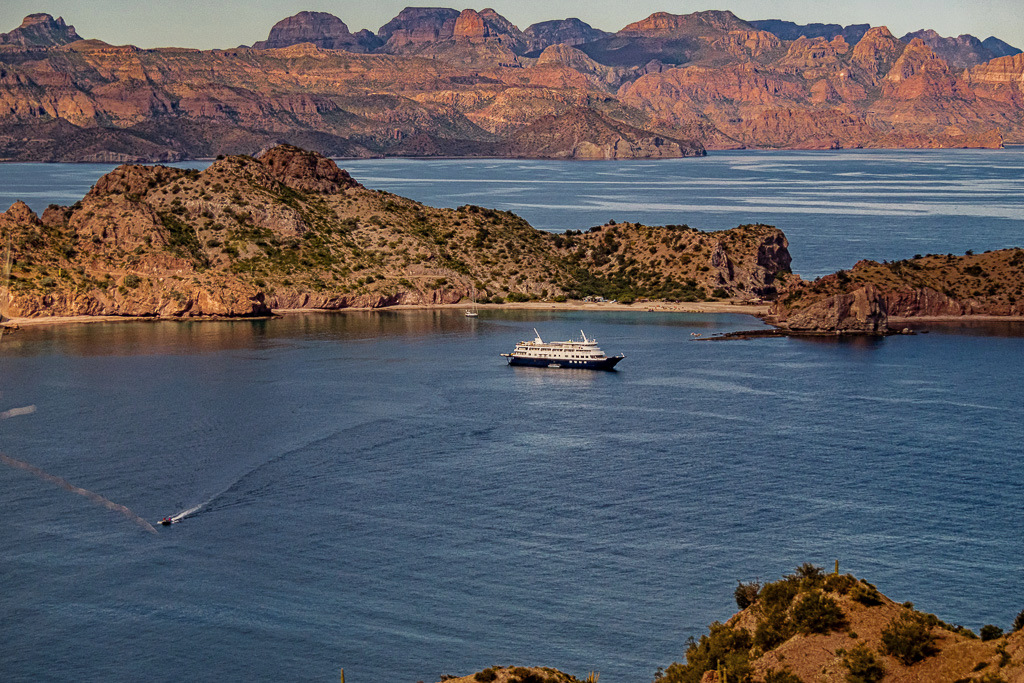 Most days, there is an opportunity to hike, and a choice of either easy or more challenging routes. On our four-hour hike in Agua Verde, the ascent involved climbing over boulders, which wasn’t as tricky as it sounds, as the crevasses in the rock form convenient natural handholds.

Along the way, we passed green shrubs and vines, Oregon pipe cactus; the impressive palo blanco tree, with its white bark; and delicate wildflowers in lovely shades of purple, pink, red and yellow. Because of an uncharacteristically rainy fall, the desert terrain was much greener and more colourful than it usually is.

We stopped at the top to take photos, and the view was breathtaking, with the red and orange cliffs, formed by early volcanic eruptions that have been thrown up into the air, and then settled into tuff. 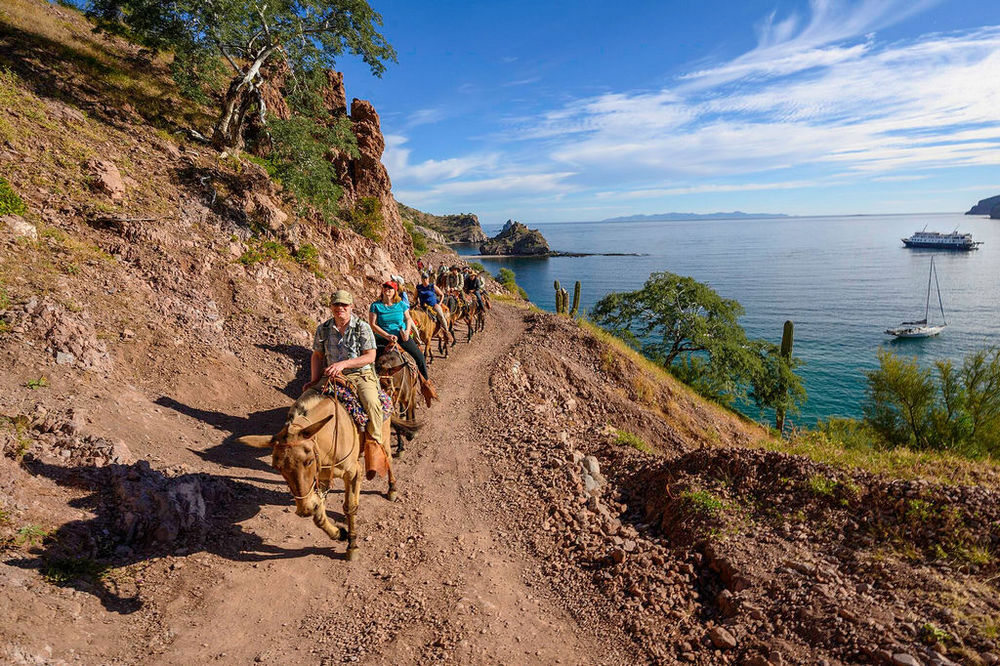 In the afternoon, we come back to the mainland, this time to ride burros.

We make a 1.5-hour loop, with intermittent glimpses of the water below us, and eventually, head down a steep hill to the beach. There, our guides are setting up a bar for cocktails and a bonfire next to the water.

We sit with blankets over our laps while one of the Romeros and his nephew play traditional folk songs from their village. It’s the end of a perfect day. 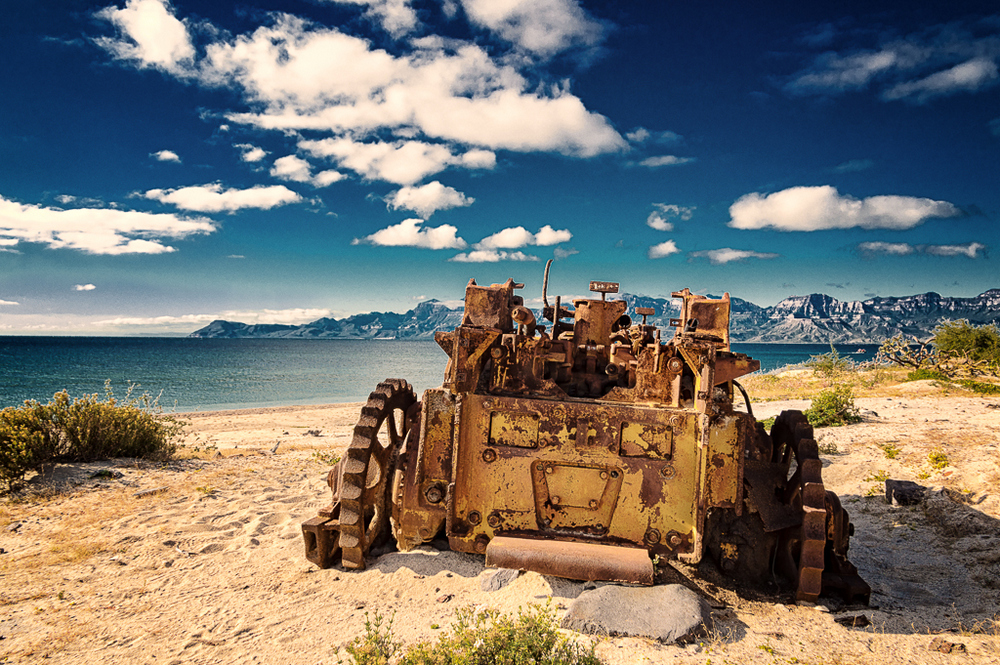 Another day we stop in Punta Salinas. Once a salt town, there are remnants of old stone buildings and tractors.

Over a low-sloped beach, we come onto the salt flats, where salt was once excavated through a simple process of sun, wind and evaporation, according to our UnCruise expedition guide, Marika Powers.

Waves come up over the sand, salt percolated through it and then fill up the ponds. Workers would speed up the process by digging, and also used tractors and other machinery, some of which you can still find abandoned, and corroded, in the dunes. 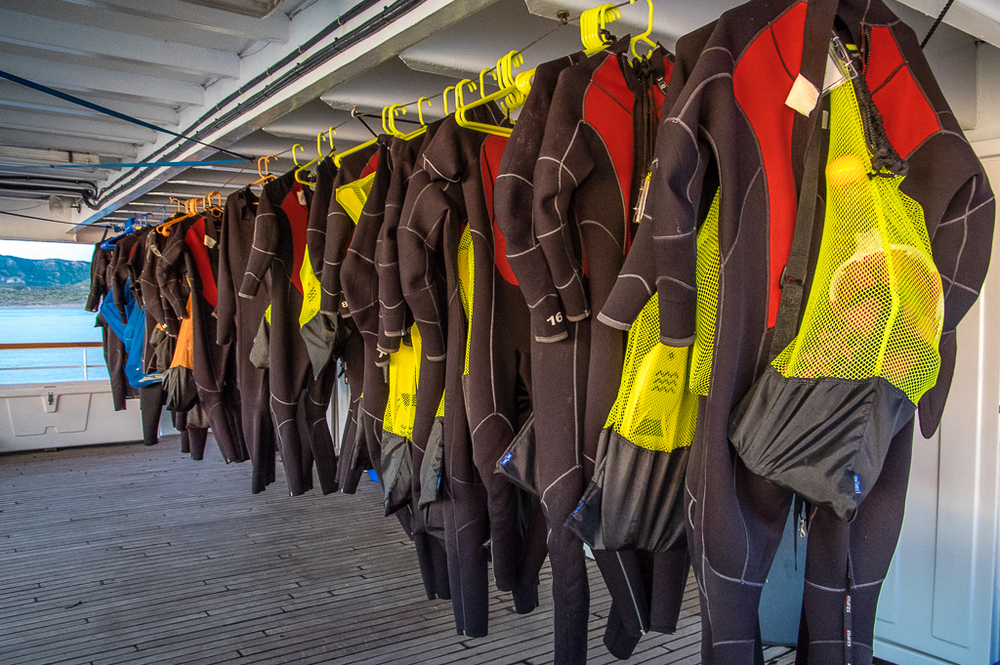 As well as snorkelling with frisky sea lions, we had several other opportunities to don our wet suits and explore the turquoise waters.

Whether exploring a reef or swimming off a weathered rock wall, we found a rich underworld of colourful coral and fish.

While the beauty and colour below the water’s surface was incredibly captivating, at times I would venture to the surface and rip off my mask and merely stare out at the beauty that also lay above. I would admire the rugged red mountains, and at the osprey and blue-footed boobies that soared through the wide strip of piercing blue sky above us.

Even with the wet suit, the water is cool — a balmy 68°F (20° C) — so after an hour’s snorkel, the two hot tubs on the top deck of our UnCruise ship were a welcome respite, especially with a glass of wine or margarita in hand. 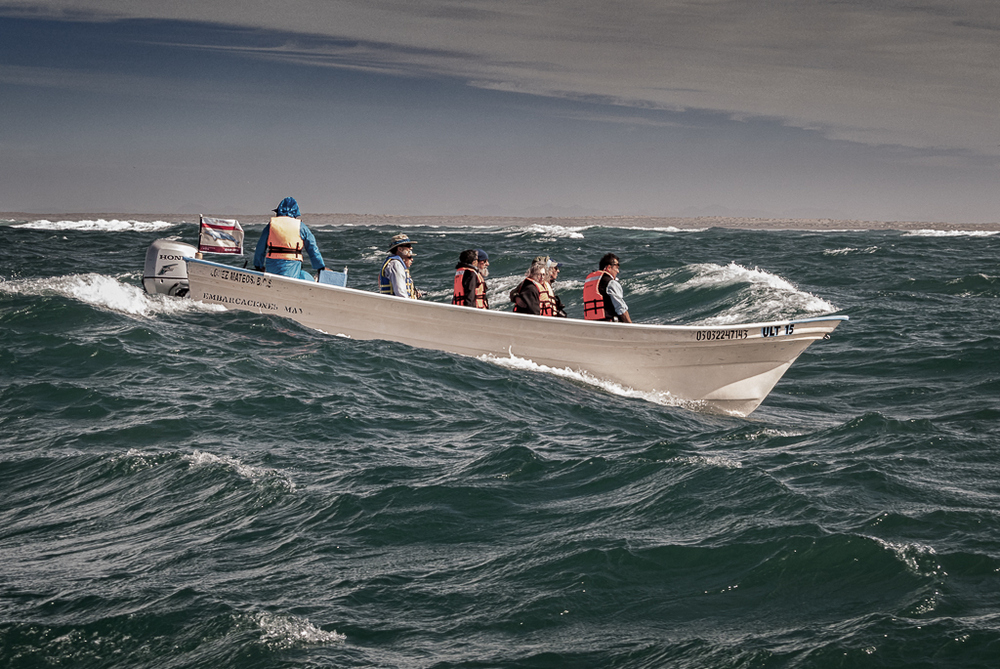 Another day, we boarded minibuses in Puerto Escondido to drive two hours across the mainland to Bahia Magdalena on the Pacific coast.

The first half of the ride is the most spectacular. The sun peaks through the clouds as we wind through the mountains, first like a wall on one side, and eventually spreading out before us.

Finally, we pass under an archway for the Santuario de la Ballena Gris in Puerto López Mateos.

We boarded a small fibreglass boat — or pongas — first passing huge sand dunes, then travelling alongside mangroves until eventually, we leave the calmer waters for the open sea.

Although only in glimpses, we do manage to spot several grey whales breaching the water, their massive, black-grey backs looking like big rocks piercing the surface. 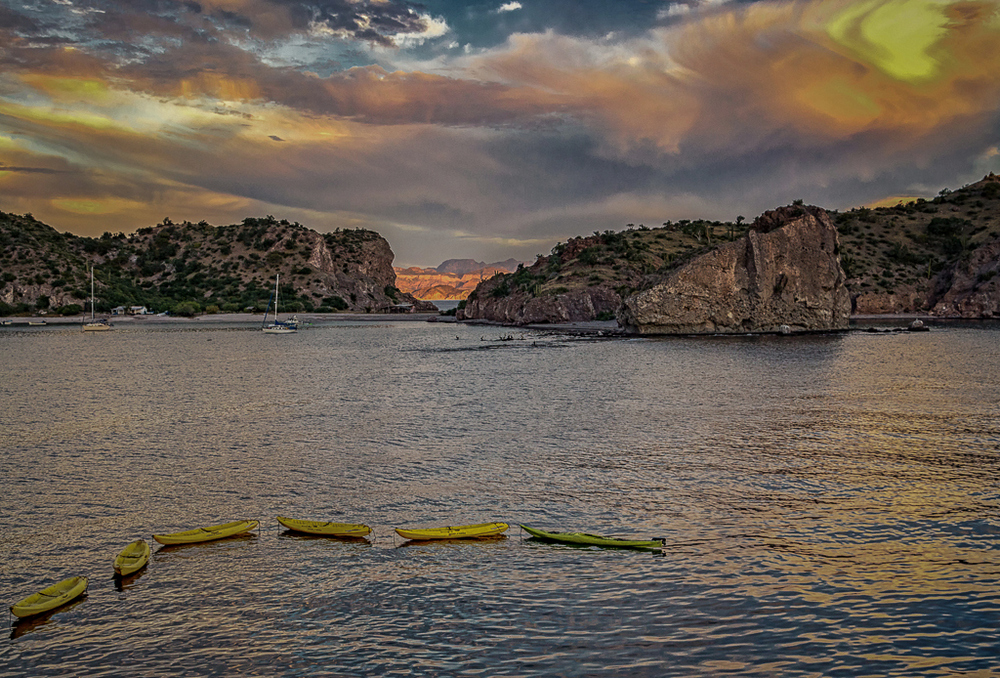 One afternoon we take zodiacs from our ship to the beautiful beach at Isla San Francisco.

Some guests relax on the beach. My husband wanders off with his binoculars to watch birds, and I grab a kayak with another guest to paddle along the shore. 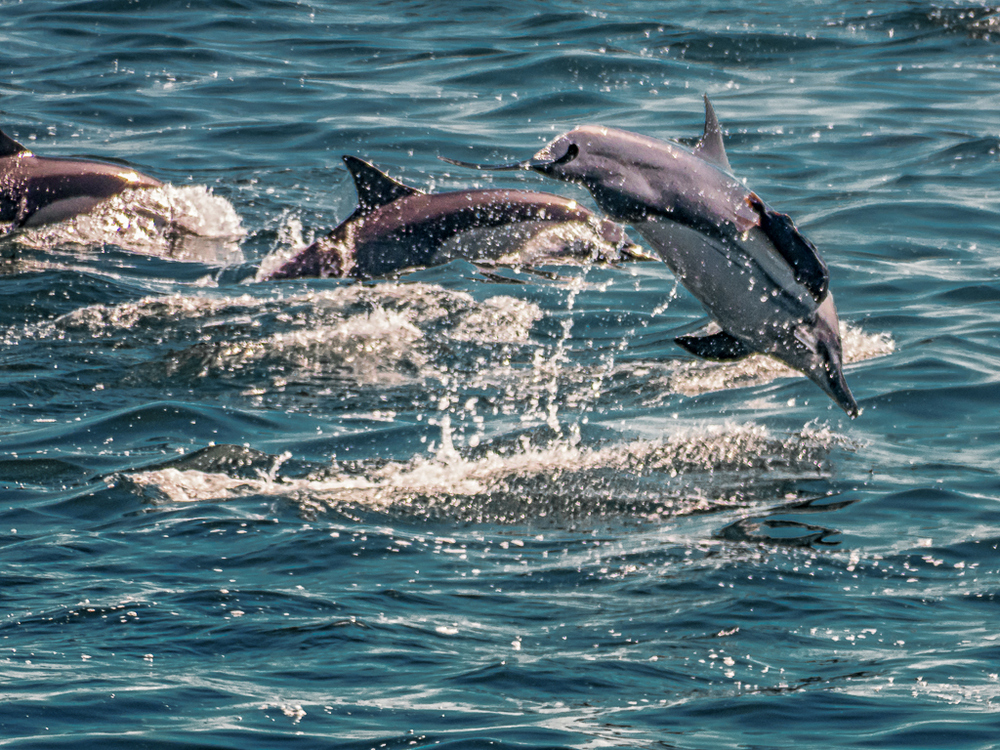 I don’t know who is more excited — the UnCruise staff or the guests — when a team of some 200 bottle-nosed dolphins appear off the starboard side of the ship.

“Dolphins at 9 o’clock,” booms over loudspeakers that reverberate in the ship’s lounge, and from speakers in our cabins. We all rush out and watch as the massive pod of dolphins dive playfully in and out of the water.

Like watching my dog run in the park, I witness their sheer pleasure, and it is contagious.

Another evening, we again get the call.

This time, three dolphins swim together next to the ship, their white outline captured by the bioluminescence of the plankton. We lean over the bow of the deck, mesmerized, while passengers with long-lens cameras lean in to snap photos.

Admittedly, it’s hard to stare with our eyes. We want to capture these moments while also having images to take back with us when we go. 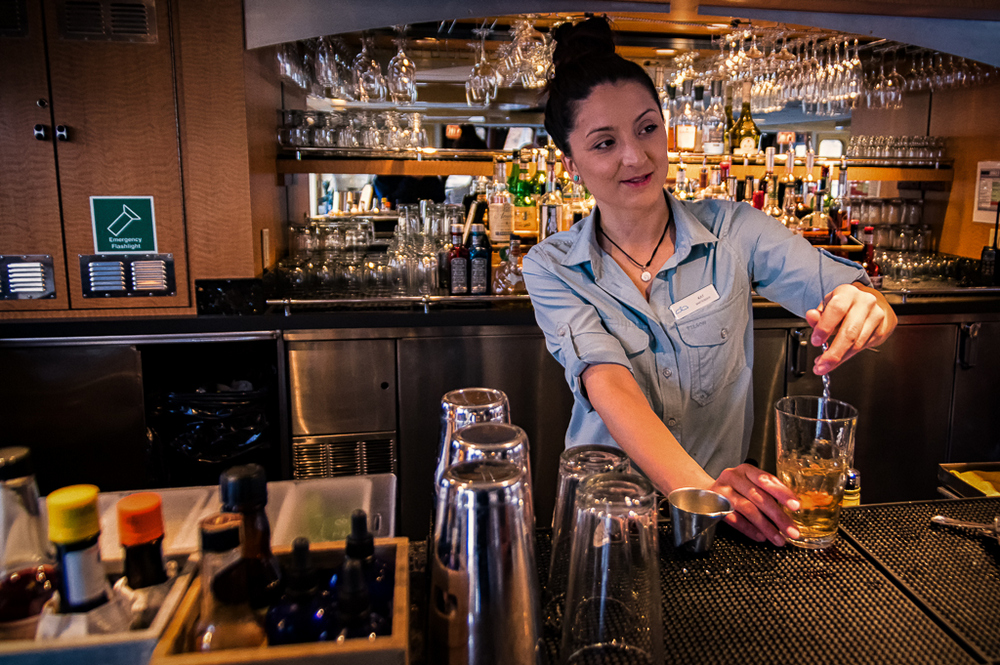 The focus on “un” refers to what this cruise doesn’t provide — no casinos, and often no ports of call, or set itineraries, and not so luxurious cabins, although they are definitely comfortable.

To begin the Sea of Cortez UnCruise tour, guests meet at a hotel in San Jose del Cabo, which is about a 20-minute drive from the Cabo San Lucas airport, before being transported about 2.5 hours by bus to La Paz to board the ship.

There are direct flights to Cabo from Toronto, Vancouver and Calgary. To ease the transition from flight to ship, you can spend a night or two first at one of the many luxury resorts in and around Cabo. We stayed at the fabulous all-inclusive adults-only Le Blanc Spa Resort.

But most everything else is included — delicious several course meals, an open bar for whenever cocktails beckon, expert guides and all the equipment and crafts required to set up our tours. However, you don’t have to go on the various excursions. People who take Uncruise tend to be adventurers who love nature and relish the opportunity to explore the wilds.