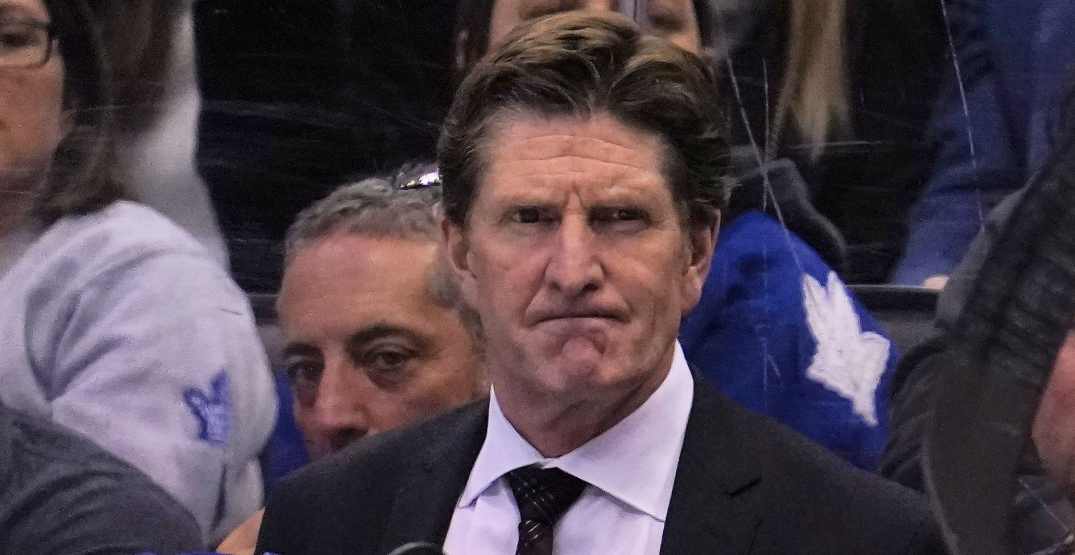 The seat underneath Edmonton Oilers coach Dave Tippett, understandably, has to feel a little heated at the moment.

The crew he commands has dropped five straight, and a 2-9-2 record in the past 13 games would have even the most veteran, tenured coaches a bit puckered — especially after guiding the same group to an NHL-best win percentage through December 2.

Things in Edmonton are heating up.

“At my age, that stuff doesn’t bother me a bit,” Tippett said Tuesday. “I’ve been around too long. And I’m with Ken Holland, who is a good man, so I don’t listen to any outside noise. The house is burning for you guys. Inside the coach’s office, in here, we’re trying to put fires out. We don’t worry about the burning.”

Coach Tippett speaks following today's #Oilers skate in Toronto including an update on McDavid & Ryan's status after they were held out for precautionary reasons. @Enterprise | #LetsGoOilers pic.twitter.com/gQjo7nshRq

Mix in sky-high expectations — fronted by the league’s two most productive players and surefire Hart Trophy candidates should the ship get corrected — with a hockey-crazed market and it’s easy to be uneasy when radio shows, social media and message boards are littered with feverish discussion about a change behind the bench.

Are changes ahead for #LetsGoOilers ? @FriedgeHNIC talked about that earlier today.

General manager Kevin Holland doesn’t seem to quit on his coaches either. Not once in his 24-year career as an NHL general manager with the Oilers and Detroit Red Wings has Holland ousted is coach in-season.

But if he opted to, here’s who Holland could look at replacing Tippett.

Keeping it within the current coaching staff would be the quickest and easiest transition for the Oilers. There’s no onboarding process, no feeling out period, and the coach would already have a sense of what he’s got in his players. Having said that, moving Glen Gulutzan from his assistant’s role to the main gig might not have the gut-punch required for this coaching move.

But he has the experience. Gulutzan joined the Oilers in 2018-19 after two seasons as head coach of the Calgary Flames, pushing the provincial rival to a record of 82-68-14 in 164. Gulutzan also has time spent behind the Dallas Stars bench, from 2011-2013, too.

Jay Woodcroft doesn’t have any head coaching experience at the NHL level, but he’s got no shortage of time behind the bench. Woodcroft currently serves as skipper for the Bakersfield Condors of the American Hockey League — Edmonton’s minor-league affiliate. He’s held the mantle for three-plus seasons after taking the position following a three-year stint in an assistant role with the Oilers.

Few hires would have the depth of knowledge of the organization, both strengths and weaknesses, as Woodcroft, who also spent seven years as an assistant coach with the San Jose Sharks from 2008-2015.

Few hires, if any at all, would shake up Edmonton like the addition of Mike Babcock. Babcock ranks ninth all-time in wins by a head coach in NHL history, but he’s been out of the league since November 2019 after being fired by the Toronto Maple Leafs. Allegations of verbal abuse and bullying have been brought forth by multiple players in the aftermath of that dismissal.

Babcock, currently guiding the University of Saskatchewan Huskies, has an international resume that adds to his lore, too. Babcock has a gold medal with Canada at the 2016 World Cup, at both the 2014 and 2010 Winter Olympics, World Championship in 2004 and World Juniors in 1997.

If one addition could give Babcock a run for its money in shock value, it’d be Tortorella. Tortorella, currently an NHL studio analyst, openly criticized Connor McDavid earlier this season.

Still, Tortorella is a two-time Jack Adams Award winner as coach of the year and he has a significant history of commanding the attention of his players in the short term. Only one on this list will bring the same level of experience as Tortorella, either, who has commanded 1,383 games behind an NHL bench over 19 seasons with the New York Rangers, Tampa Bay Lightning, Vancouver Canucks and Columbus Blue Jackets. He’s 13th all-time in wins with 673, too.

Paul Maurice shockingly stepped aside from his coaching post with the Winnipeg Jets last month, citing both personal and professional reasons for stepping away from the role he had with the club for more than eight years. He said it was time for the Jets to have a new voice.

Though it’s incredibly unlikely Maurice would pivot to become the new voice within the Oilers locker room, the option is intriguing. Only five coaches in NHL history have logged more games behind the bench than the 54-year-old Maurice, who started with the Hartford Whalers in 1995 as a 29-year-old. He hasn’t found playoff success, though, with just 92 playoff games and one conference championship to his credit.

Kevin Dineen checks a lot of boxes. He has previous head coaching experience in the NHL, from 2011-2014 with the Florida Panthers that includes a first-place finish within the division. He logged over 1,100 skates as a player, including tenure as captain within a couple different organizations. He’s also served in management as an assistant GM shortly after his playing days.

Dineen also happens to lead the best team in the American Hockey League. Under his tutelage, the Utica Comets — minor-league affiliate of the New Jersey Devils — boasts an insane .848 winning percentage this season. The group has dropped just two of 23 games in regulation this season.

Lane Lambert, an associate coach with the New York Islanders, is “well overdue” for an NHL head coaching gig, according to someone who would know — Barry Trotz. Trotz would know. Lambert has served as his associate with the Islanders the past four seasons, and as his assistant the four years prior to that when both were members of the Washington Capitals — including a Stanley Cup win in 2018.

Lambert, who played 283 games in the NHL over parts of six seasons and added 115 skates in three years in the minors, has been lead skipper before. He coached the Prince George Cougars of the Western Hockey League for a season in a half some 17 years ago, and was the lead for the Milwaukee Admirals of the AHL for four seasons from 2007-2011.

Kris Knoblauch has plenty of head coaching experience, though only a sliver behind an NHL bench. That shouldn’t necessarily exclude him, though, as he’s put together winning programs in each of his stops. Knoblauch spent seven seasons as a head coach in the Canadian Hockey League, guiding the Kootenay Ice and Erie Otters from 2010-2017 to a combined record of 298–130–16–13 and championships in both the Western Hockey League and Ontario Hockey League. Yes, he won coached McDavid in junior.

Knoblauch went on to serve two seasons as an assistant with the Philadelphia Flyers before settling in as bench boss with the Hartford Wolfpack of the AHL, where he’s in the midst of a third straight winning season. He also served as head coach of the New York Rangers last March when David Quinn and his staff entered COVID-19 protocol. Under Knoblauch, the Rangers won four of six.