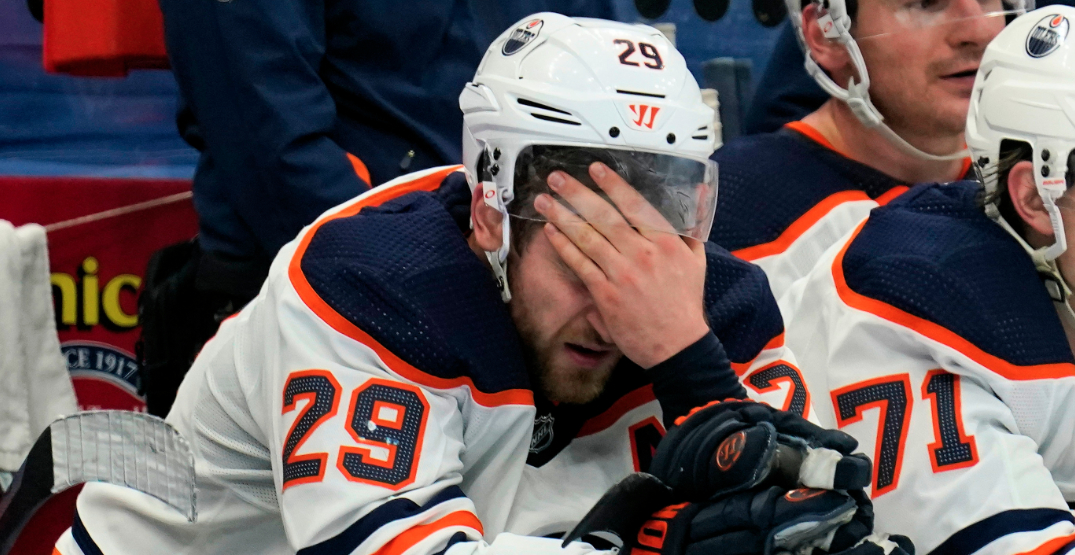 The stat line is less than encouraging for the Edmonton Oilers.

The Oilers had the best points percentage in the NHL prior to a 4-3 slump-starter against the Seattle Kraken a month ago. They’ve fallen to 18th, seven points back of the Vegas Golden Knights for first in the Pacific Division.

“You hope that there’s better days ahead,” forward Leon Draisaitl said following a 4-2 loss against the Toronto Maple Leafs on Wednesday. “It’s frustrating. No one wants to lose.

“We’ve been losing for a long time now. It’s time to win.”

Edmonton, with a .559 winning percentage, would be on the outside looking in if the Stanley Cup Playoffs started today, trailing both the Winnipeg Jets (.578) and Los Angeles Kings (.561) for the second wild card spot in the Western Conference.

“It’s easy to play when you’re confident and winning, and it gets tougher when you’re going through something like this,” defenceman Cody Ceci said Monday. “It’s just a frustrating time. We can’t make any excuses. We’re the only ones that can do it and pull ourselves out of this one.

“I think it’s definitely affecting the mood of players. When you start getting down on yourself, you get frustrated with teammates and whatnot, so we’ve got to do the best we can to get over that. I think a win will go a long way for this group.

“We started the year off really well, so we know we can do it. We just need to get back to that.”

"We can't make any excuses. We're the only ones who can pull us out of this one."

It’s prompted speculation about changes throughout the organization, whether it be addressing subpar goaltending — a collective team save percentage that’s fourth-worst in the NHL at 5-on-5 — or a potential coaching change behind the bench.

“Eventually you have to find a way to turn it around. We’re hurting right now with key players out. That never helps, but every team is going through that. We’ve just got to figure it out eventually.”