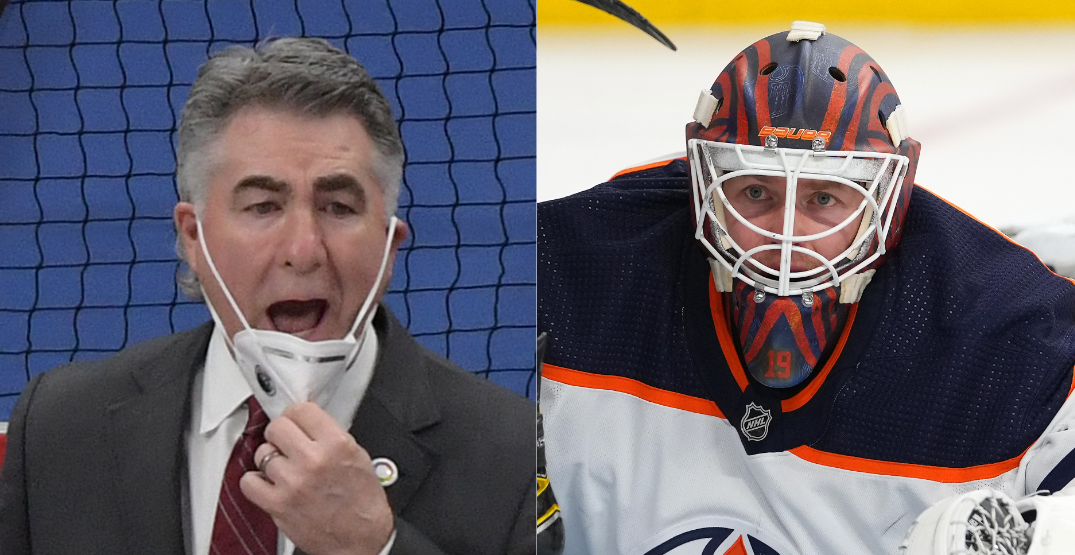 Mikko Koskinen didn’t enjoy the postgame comments from Edmonton Oilers coach Dave Tippett. Few would fault him for that.

Tippett didn’t exactly sugarcoat things after a 4-1 loss to the New York Rangers on Monday, an outing where Koskinen allowed four goals, including one on a turnover of his own doing in the first period, on 28 shots in a fourth straight loss for the Oilers.

“I thought we did a lot of things well tonight,” Tippett told reporters on Monday. “Our goaltender wasn’t very good, and we didn’t find enough pucks at the net to get us back in the game.

“That’s how it usually goes in this business,” Koskinen said. “When a team is doing badly, either the coach or the goalkeeper is sacrificed. It doesn’t feel nice to anyone when thrown under the bus, but I had no big emotions about the things coach said. You just have to go to the next game.

”It’s not nice being thrown under the bus. I have to be better, but at the same time, we scored seven goals in my last six losses. I can’t score goals.”

Mikko Koskinen on critics from Tippett, media: ”It’s not nice being thrown under the bus. I have to be better but at the same time we scored 7 goals in my last 6 losses. I can’t score goals.” #LetsGoOilers #NHL https://t.co/GGxX8EKJnI

Tippett told reporters on Wednesday that his words were taken out of context.

"The drip, drip, drip thing is not ideal… It wreaks havoc with your team for sure."

Coach Tipp on news that three more players have entered COVID protocol after going through a stretch where bodies were starting to return. @Enterprise | #LetsGoOilers pic.twitter.com/0H2z4KSVEU

“Goaltenders, when they make mistakes it has an impact on the game,” he said. “We’re a team struggling. Those are mistakes that are made that affect the outcome of the game. It’s no different than we would say with a defenceman…a winger makes a mistake, you never notice it. The centreman, a little more. Defenceman, a little more. Goaltenders, they’re front and centre. Has an impact on the game.

“There’s a frustration around our team, and the question…it wasn’t the whole game. The question was the start of the game. The whole thing was taken out of context. We’re talking about starting the game…the first five minutes of the game, not giving up the first goal. That’s what it was. Mikko made some good saves in that game. He hung around the game.

“But it was the start of the game. We’re trying to get off to a good start. That’s the part that you get emotional about.”