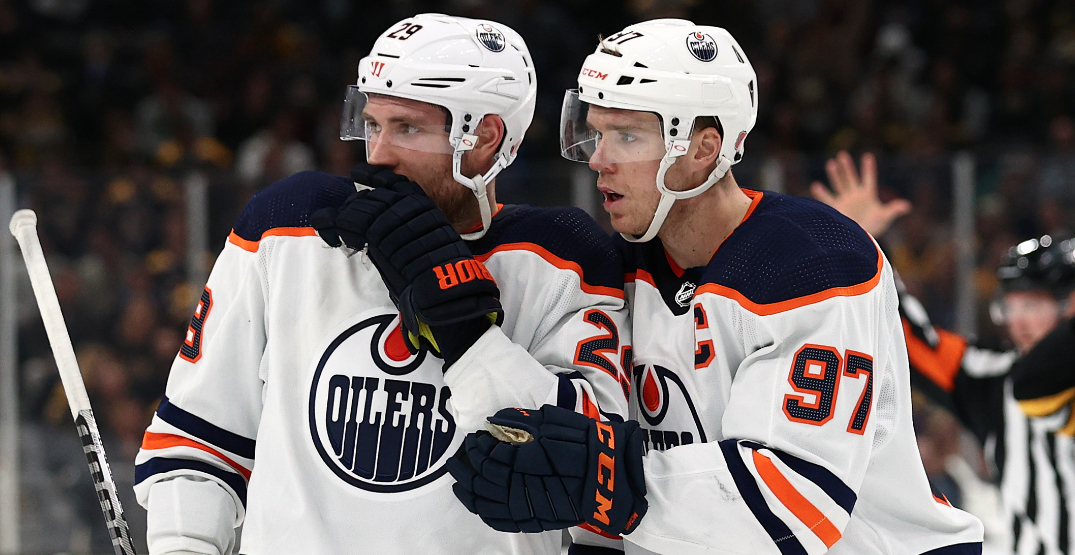 It’s pretty clear the NHL awards race, at least through the opening third of the season, is a two-horse derby.

And they happen to reside in the same stable.

Edmonton Oilers forwards Connor McDavid and Leon Draisaitl have been the NHL’s best two forwards through the opening 29 games of the season, and it’s almost automatic that the pair, should things continue to progress through the balance of 53 remaining games, that they’ll collectively or individually walk away with both the Hart Trophy and Ted Lindsay Award as the league’s most important players.

Outside of a potential push from Alex Ovechkin, it isn’t close.

The resumes stack up too much for the duo that currently has the Oilers in fourth in the Pacific Division and in the second wild card into the Stanley Cup Playoffs from the Western Conference.

Each sits atop the NHL with 49 points. Draisaitl holds the NHL lead in goals with 23 — ahead of McDavid’s 17. McDavid paces the league in assists with 32, while Draisaitl sits tied for third at 26.

Draisaitl also leads in power-play goals (13), game-winning goals (6), points within his own division (21) and goals-per-game (0.79) among players with 16 or more appearances this season. He was flirting with a 50-goals-in-50-games pace through the opening quarter of the season.

Earlier this year, Draisaitl became the first player in Oilers history not named Wayne Gretzky to amass 40 points before the 20-game mark of a season.

McDavid leads in power-play points (22), and has a share of the lead in points-per-game (1.69) and a share for points on home ice (28). He leads the NHL in goal-of-the-year-candidates with not one but two entries.

He became the fourth-fastest player to make 400 assists earlier this season.

“He’s a pretty special player,” Oilers coach Dave Tippett said in November. “You could put him in with a handful of guys in the league that are dominant like that. I was fortunate to play a year with Mario Lemieux (in 1992-93) and saw some things like that out of him. But he’s a special player; he can make something out of nothing.”

McDavid and Draisaitl are both on pace for 139 points.

In fact, no NHLer has reached that mark since teammates Mario Lemieux and Jaromir Jagr eclipsed those totals in 1995-96. Lemieux had a remarkable 161 points (69 goals, 92 assists) and Jagr netted 149 points (62 goals, 87 assists).

Draisaitl’s previous best came in 2019-20 when he had 11o points (43 goals, 67 assists). He won his only Hart, in addition to the Ted Lindsay Award and Art Ross Trophy, that season.

McDavid already has two Hart trophies, in 2017 and 2021, to go with three Ted Lindsays — given to the “most outstanding player in the regular season as judged by the members of the NHL Players’ Association.”

The only issue potentially plaguing the pair is that they could inevitably split the votes.

It’s hard to argue one is more valuable than the other.

Draisaitl plays an NHL-leading 22:54 per game. McDavid is second at 22:26. A lot of that time is spent together, whether it be at even strength or on the power play.

The Hart Trophy in particular will put the teammates element under the microscope, with some suggesting the definition — awarded “to the player adjudged to be the most valuable to his team” — would splinter under the weight of a team having multiple candidates.

Easy to argue either is the league’s best player. Still not a reach by any means to call each equally valuable to the Oilers.

A little more difficult, some voters might suggest, calling one the league’s most valuable when he has the other helping with the lifting.

Still, they have to be the favourites for both.

Because no one else is really doing what either has been able to accomplish to date.