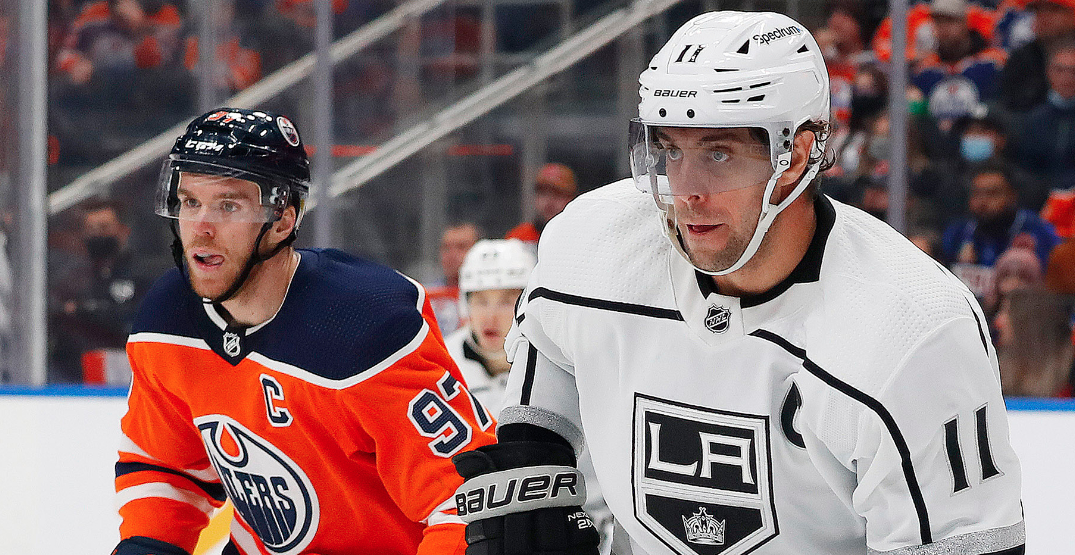 The Edmonton Oilers and Los Angeles Kings are on a collision course to start the Stanley Cup Playoffs.

There’ll be no shortage of excitement or drama, especially given the coin-toss nature of the matchup. MoneyPuck, for example, gives Edmonton — who opens with home-ice advantage on Monday — a 55.6% chance of taking the series, leaving Los Angeles with the slightly-lower 44.4% odds.

The Oilers went 3-1 against the Kings in the regular season, registering their only loss against Los Angeles in their first meeting of the season. It came by way of a 5-1 thumping on December 5, helping kick off nearly two months of pain for the Edmonton franchise that culminated in the firing of coach Dave Tippett.

The season series saw the Kings’ power play function at 18.8%. Their penalty kill was flawless in nixing 10 minors across the four games.

Overall, Los Angeles outshot Edmonton by an average of eight shots per game, registering 36.5 pucks on goalies per game while surrendering just 28.5.

On the larger scale, only four teams averaged more shots on goal than the Kings this season, who mustered 34.9 pucks on net. By comparison, the Oilers were 10th with 34.1. The bigger gap, whoever, came in what each team gave up. Los Angeles was the second-stingiest team through action Wednesday, allowing their goaltenders to see just 28.5 shots-per-game. To contrast that, Edmonton’s defence allowed 32.0 — 19th overall.

Give the Oilers the special teams battle, though.

Not surprisingly, given the arsenal, Edmonton had one of the NHL’s most elite power plays at 23.5. Los Angeles was the ninth-least penalized team, which helped take the heat off the NHL’s 20th-best penalty kill unit at an 81.8% success clip.

The flip puts the odds in Edmonton’s favour, too. The Kings had one of the NHL’s worst power plays, ranking 26th at a conversion rate of just 12.7%. The Oilers had an above-average penalty kill at 83.9%, which was slightly above the mean in penalties.

McDavid leads the NHL with 123 points (44 goals, 79 assists), eight more than Johnny Gaudreau of the Calgary Flames and Jonathan Huberdeau of the Florida Panthers. He also leads the league in multi-point games (45) and ranks first with 26 multi-assist games.

Draisaitl has scored an NHL career-high 55 goals, second only to the 60 scored by Auston Matthews of the Toronto Maple Leafs. He is the only the fourth player in Oilers franchise history with multiple 50-goal seasons and is fourth in league-scoring with 110 points (55 goals, 55 assists).

Anze Kopitar and Adrian Kempe lead the way for the Kings. Kopitar had 67 points (19 goals, 48 assists) in 81 games, and Kempe led the team with 35 goals.

Only two Oilers, however, averaged a point-per-game or better against the Kings this season: McDavid and Evander Kane. Both Trevor Moore and Drew Doughty accomplished the feat for the Kings.

Defensively, the Kings were only marginally better than their counterparts — which is why the goaltending battle between the two teams could be extra intriguing.

The Oilers will undoubtedly ride 40-year-old Mike Smith into the first-round series. Smith’s .936 save percentage from March 1 onward is tops in the league among backstops with five or more starts, and 36-year-old Jonathan Quick went 6-1-0 with a 2.24 goals-against average down the stretch.

Edmonton has been better at home with a 27-12-1 record with one date remaining, while Los Angeles finished 21-16-4. The Kings are a much better road team with a 23-11-7 record, while the Oilers closed out the season 21-15-5 away from Rogers Place.

Even history is on the Oilers’ side.

Edmonton has won five matchups in the seven occasions the teams have met in the playoffs. That includes the last time the two teams met back in 1992 — a six-game victory.

We’ll find out, starting next week.