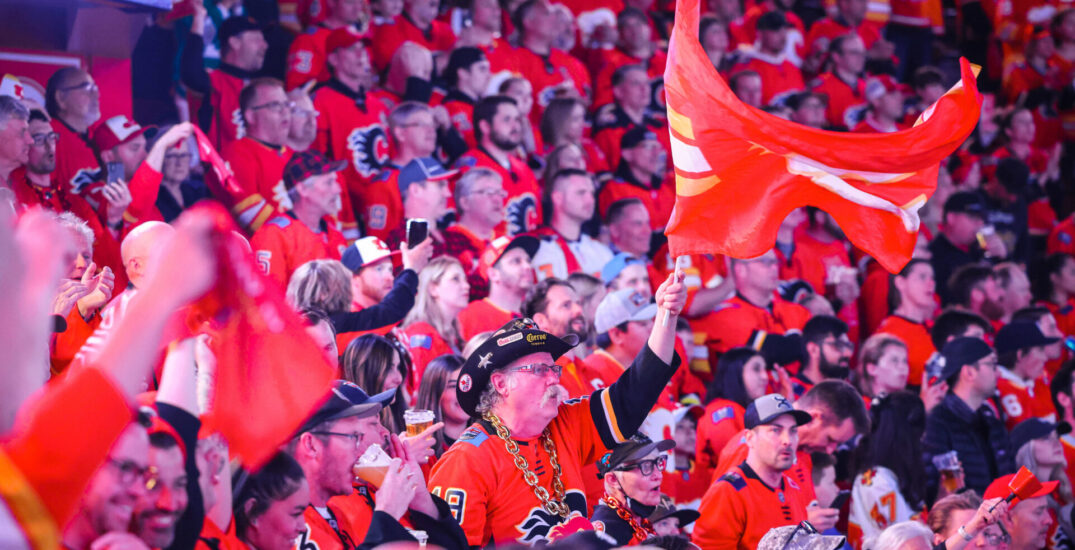 With the ongoing popularity of the Calgary Flames’ Red Lot, future events will remain ticketed, and tickets for Game 1 of the second round of the Stanley Cup playoffs are to be released on Wednesday morning.

The Red Lot acts as a viewing party for fans in front of the Scotiabank Saddledome. The event initially only ran during home games at the Dome but was in such high demand that for Game 6 of the first round of playoffs, which took place in Dallas, the Flames opened the lot.

For Game 7 of the Flames’ series against the Dallas Stars, the organization made the event ticketed, and that policy will stay in effect for future events.

“The decision to move to a ticketed event was made to enhance the fan experience by decreasing the line and wait times for the Red Lot and ensuring the safety of everyone in attendance,” reads a news release from the Calgary Flames.

The good news is, tickets are free – but they’re limited to two per person.

Tickets for Game 1 of round two of the Stanley Cup Playoffs will be made available at 9 am on Wednesday, May 18.

The Red Lot is back for Round 2!

Tickets are 𝙁𝙍𝙀𝙀 and 𝙍𝙀𝙌𝙐𝙄𝙍𝙀𝘿 for entrance. Tickets for Game 1 will be available tomorrow at 9:00 AM MT – more info ⬇️ https://t.co/eE91CyBSdq

Fans are asked to only get tickets that they know they will use, to avoid wasted tickets. The Flames also advise arriving at the viewing party early, as space in the Red Lot is subject to availability if you arrive after puck-drop.

Tickets to the Flames game itself do not provide access to Red Lot. Additionally, tickets are now non-transferrable.

Those without tickets will not be permitted entrance to Red Lot under any circumstances, reads the release, and are asked not to come to the site.

“We understand that demand for Red Lot tickets will very likely outweigh supply,” said the Calgary Flames, “and would like to reiterate our tremendous gratitude for the extraordinary support of the C of Red.”

If you snag tickets, it’s important to note that the Red Lot Community Viewing Party will now open two hours prior to the scheduled puck drop, and closes at the end of the game.

Tickets can be obtained via NHL.com.