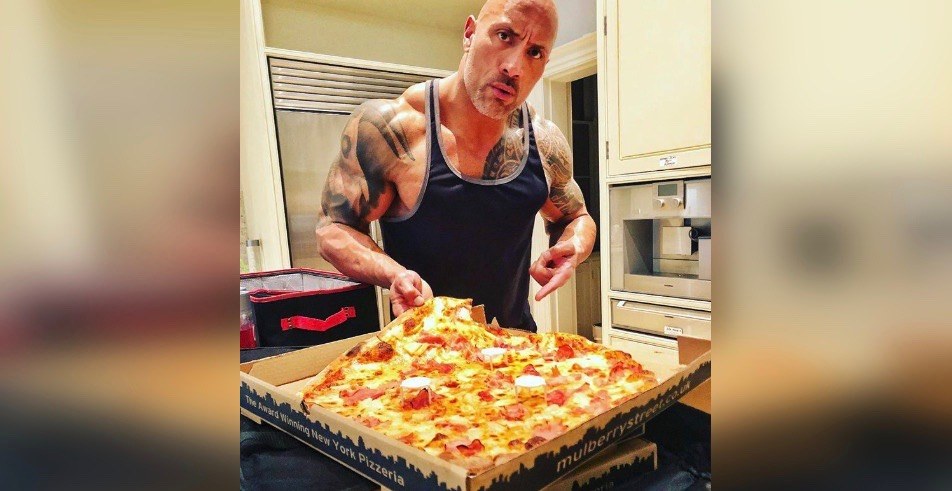 Dwayne ‘The Rock’ Johnson is much-loved by WWE fans and moviegoers all around the globe, but there’s a place that the star seems to be pretty damn fond of – you guessed it – big, beautiful Canada!

Johnson has a history with Canada that goes way back before he was famous.

The semi-retired WWE superstar spent time here as a young man playing football in the CFL, and now he’s here frequently filming blockbusters movies like Hobbs And Shaw and Jumanji.

From eats to scenery to just straight up good vibes, here are three times The Rock proclaimed his strong love for Canada.

The actor recently shared a photo of himself on the tarmac of the airport explaining to fans what it meant to be back on Alberta soil, and what memories that brought up for him in a heartfelt caption about the city of Calgary.

Hawaiian Pizza is his jam

Johnson posted a photo of a carb load he was requested to enjoy by his strength and conditioning coach while filming Hobbs And Shaw – the Fast and the Furious spinoff he is staring in with Jason Statham – and it was one of Canada’s most debated culinary exports, Hawaiian pizza.

The megastar explained that he loved his “midweek pizza carb ups like a drunk loves free peanuts,” and says that “pineapple on pizza is MY JAM – with ham” before hashtagging #mypizzamyrules.

In a video shared on his Instagram, The Rock explained why Vancouver was one of his favourite cities in the world.

“Just got to show you this view, it is spectacular, one of my favourite cities in the world – Vancouver, Canada. Look, I’ve dropped my blood and sweat in this city, wrestled multiple matches in this city, shot big movies in this city,” says the wrestler-turned-movie star in the video.