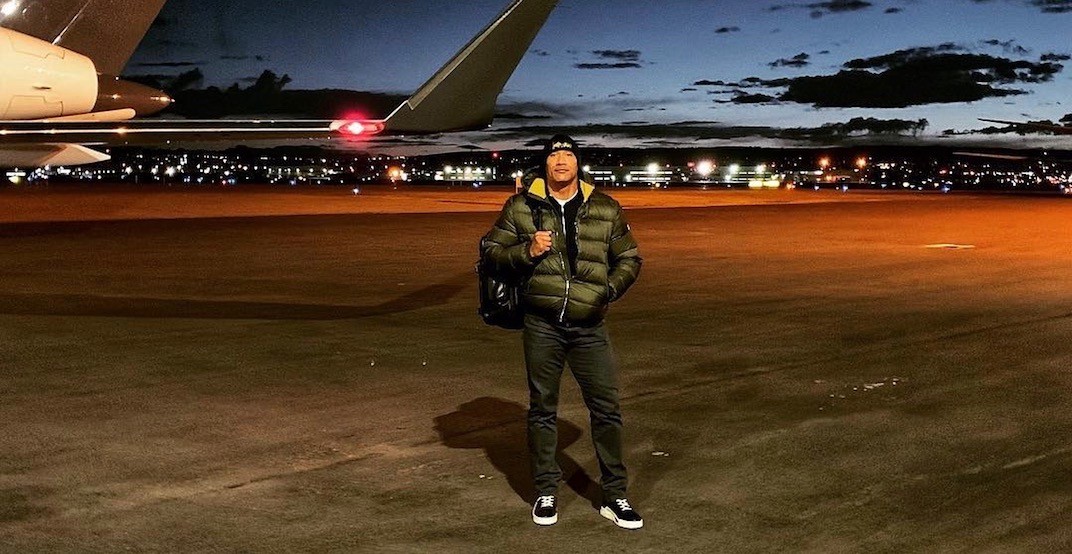 The Rock Landing in Calgary (@therock/Instagram)

The Rock has been known for showing mad love for Vancouver, along with the glorious Canadian creation that is Hawaiian Pizza, but this morning he shared a post shouting out another city in the north – YYC.

The actor shared a photo of himself on the tarmac of the airport explaining to fans what it meant to be back on Alberta soil, and what memories that brought up for him in a heartfelt caption about the city of Calgary.

The semi-retired wrestling superstar said his “brain was flooded with crazy experiences” of the city, as he was in Calgary playing CFL football before getting cut from the Calgary Stampeders earlier in life.

The A-lister said he had “a deep reverence for this town” and that it was “good to be back.”

In a previous video filmed in Vancouver in August 2017, The Rock explained how meaningful his time in Calgary playing football was.

“I was so excited. Two days later, I got cut. Dreams shattered, sent home with several bucks in my pocket. I was like, ‘wait no, I’ve got to play in the NFL, eventually. Those were my big goals, my dream.’ ”

“You realize that playing in the NFL was the best thing that never happened, because it got me here, so my point is you’re going to get your ass kicked, we’re gonna get the shit kicked out of us. You’ve got to get up and have faith that the one thing you wanted to happen often times is the best thing that never happened. So have faith, just keep that mind, and keep plugging away.”

The Rock is in town to film the third installment of Jumanji, set to hit theatres Winter 2019.

Defining memories. Wow. Landed last night here in Calgary, Alberta Canada 🇨🇦 to continue shooting JUMANJI. My brain was flooded with crazy experiences here. This is the city where me having only $7 bucks in my pocket all began. I have a deep reverence for this town ~ she shook me in the best possible way. Good to be back. Let’s get to work. #7buckaroos