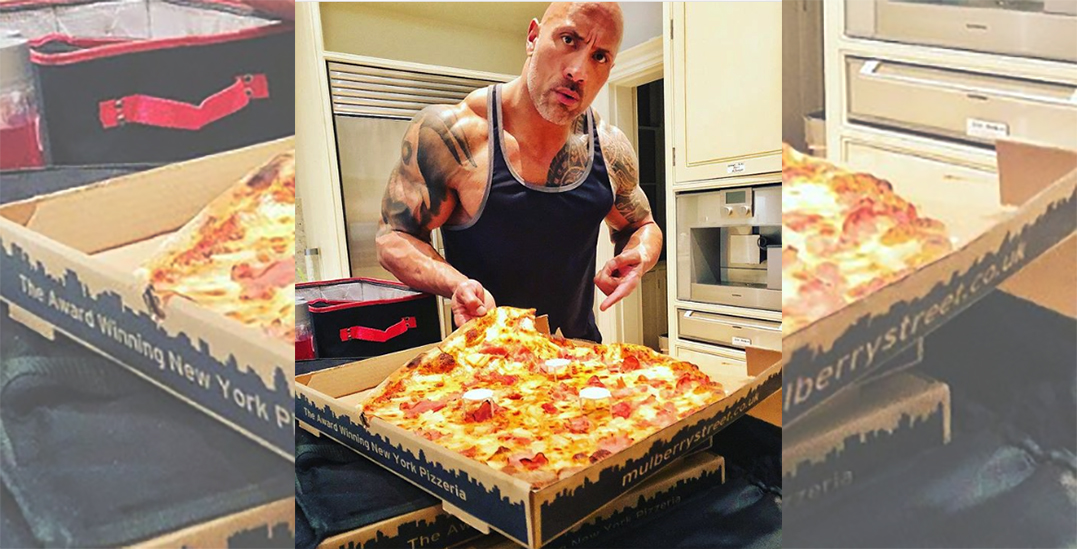 It’s no secret that Dwayne ‘The Rock’ Johnson is a big fan of Canada.

The A-list action star recently shared his story of why he loves beautiful Vancouver – aka “one of his favourite cities in the world” – and he just revealed he’s a fan of our country for a different (and more delicious) reason.

The American actor and former professional wrestler posted a photo of a carb load he was requested to enjoy by his strength and conditioning coach while filming Hobbs And Shaw – the Fast and the Furious spinoff he is staring in with Jason Statham – and it was one of Canada’s most debated culinary exports, Hawaiian pizza.

The megastar explained that he loved his “midweek pizza carb ups like a drunk loves free peanuts,” and says that “pineapple on pizza is MY JAM – with ham” before hashtagging #mypizzamyrules.

Clearly, he shares the same rules as Prime Minister Justin Trudeau in loving this combo, something the politician publically proclaimed last year.

I have a pineapple. I have a pizza. And I stand behind this delicious Southwestern Ontario creation. #TeamPineapple @Canada

The Canadian man behind the invention of the Hawaiian pizza, Sotirios (Sam) Panopoulos, passed away at the age of 83 in London, ON, in 2017, but his legacy and controversial creation live on.

📱🍕💪🏾 Got the glorious text from my strength & conditioning coach @daverienzi that read “DJ, need a mid week carb up for your big scenes tomorrow. Eat a pizza and send me your pics in the morning” to which I responded – Watch. This. We’re having fun strategically manipulating my diet/body for shooting HOBBS & SHAW (my Fast & Furious spin-off film) and I love these midweek pizza carb ups like a drunk loves free peanuts. As for my pizza toppings – keep in mind, I’m the guy who likes to put tequila and brown sugar in my oatmeal, so pineapple on pizza is MY JAM – with ham. #PizzaCarbUp #StrategicManipulation #HobbsAndShaw #MyPizzaMyRules🍍😈