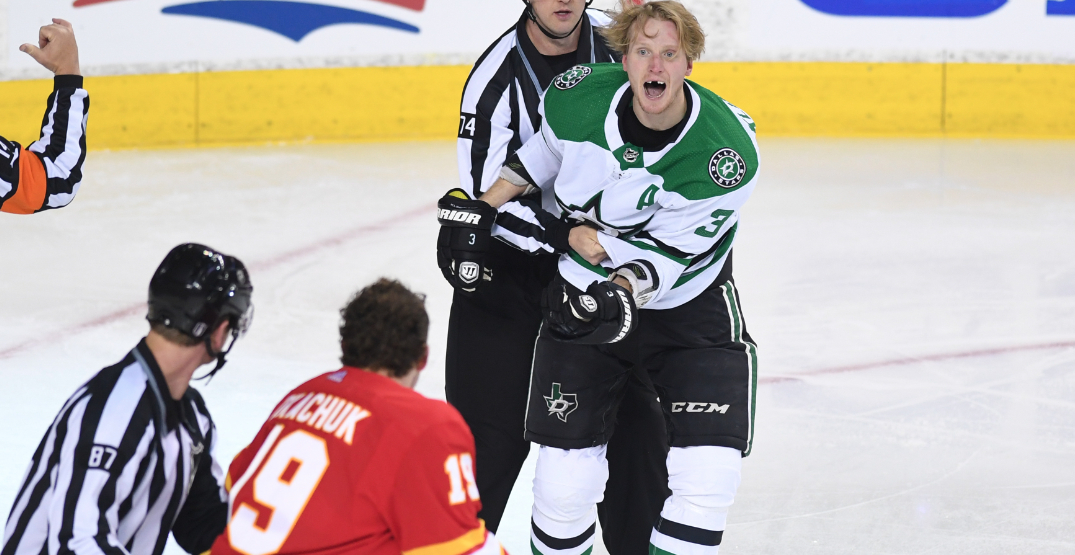 Bring your boos, C of Red, because Dallas Stars defenceman John Klingberg is more than happy to play the role of public enemy no. 1.

This guy has a huge target on his back now…and he loves it 😈@DallasStars | #OneStateOneTeam | #StanleyCup | 📺: BSSW pic.twitter.com/kKdCaxYhNV

Klingberg drew the ire of the Flames and Flames fans after a Game 1 tussle with Calgary defenceman Rasmus Andersson. Both were ejected at the end of the first period for dropping the mitts in an encore presentation to Matthew Tkachuk’s bout with Dallas forward Michael Raffl.

He called out Andersson postgame.

“I mean, I’m not saying I’m a tough guy, but he’s acting tougher than he is,” charged Klingberg, who has 19 penalty minutes in the first two games of the series after amassing just 34 in 74 regular-season games.

“I feel like he’s the one guy there in the scrum, he doesn’t have a guy. I’m standing there with (Blake) Coleman, and he’s standing there shaking his gloves to me, like, ‘You wanna go against me,’ probably the least fighter on our team on the ice there. I’m skating over to him, I’m dropping my gloves and I want to go and he’s just standing there, two seconds, and then all of a sudden he drops his gloves.

“He’s acting a little tougher than he is. We’re going to go after him.”

The Flames did their best to pay Klingberg no mind in the off-day prior to Game 2.

“I don’t even know what that means — going after somebody,” Tkachuk countered. “But I think we have enough guys that can handle ourselves outside of Raz, who can handle himself quite well.”

Still, it was Tkachuk who went immediately after Klingberg in Game 2, swapping slashes with the Stars defender inside Dallas’ blue line in a play that negated a nifty rush by Johnny Gaudreau and resulted in coincidental minors — Tkachuk for cross-checking and Klingberg for roughing.

Klingberg drew boos whenever he touched the puck throughout the contest, but got the last laugh.

The Stars evened the series with a 2-0 shutout win.

Game 3 goes in Dallas on Saturday.