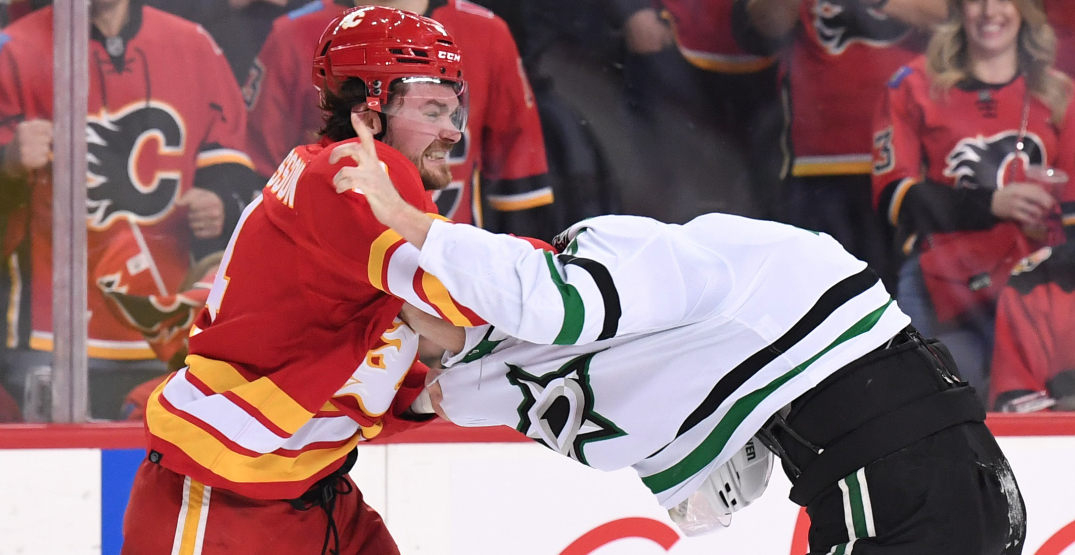 Note to Calgary Flames defenceman Rasmus Andersson: the Dallas Stars are shooting for you.

At least, that was the lip service paid after the Flames dispatched of the Stars in Game 1 of their first round series of the 2022 Stanley Cup Playoffs, to hear John Klingberg tell it.

Klingberg, of course, has a bone to pick with Calgary’s right-shot rearguard after throwing down in a series opening 1-0 loss on Tuesday.

TWO FIGHTS IN ONE NIGHT

At the end of the first period, the pair was ejected after dropping the gloves in an impromptu bout following a taffy pull between Matthew Tkachuk and Michael Raffl to close out the first period.

"He's acting a little tougher than he is. We're going to go after him."

John Klingberg on his fight with Rasmus Andersson#TexasHockey #Flames pic.twitter.com/kwYgL17goq

“I mean, I’m not saying I’m a tough guy, but he’s acting tougher than he is,” Klingberg charged postgame, having 40 minutes of game action and two hours of real time to stew over the exchange, in which Andersson landed several heavy shots to Klingberg.

“I feel like he’s the one guy there in the scrum, he doesn’t have a guy,” added Klingberg, who logged all of 34 minutes in penalties this season and has two fights to his credit over an 552-game career.

“I’m standing there with Coleman, and he’s standing there shaking his gloves to me, like, ‘You wanna go against me,’ probably the least fighter on our team on the ice there. I’m skating over to him, I’m dropping my gloves and I want to go and he’s just standing there, two seconds, and then all of a sudden he drops his gloves.”

The rule that was (presumably) applied to Klingberg and Andersson. pic.twitter.com/PgU5qhW14t

Andersson, a noted trash-talker on the ice and a beloved teammate off it, now has three NHL scraps under his belt.

“He’s acting a little tougher than he is,” Klingberg said. “We’re going to go after him.”

Game 2 of the series is at Calgary on Thursday. Puck drop is at 8 pm MT.