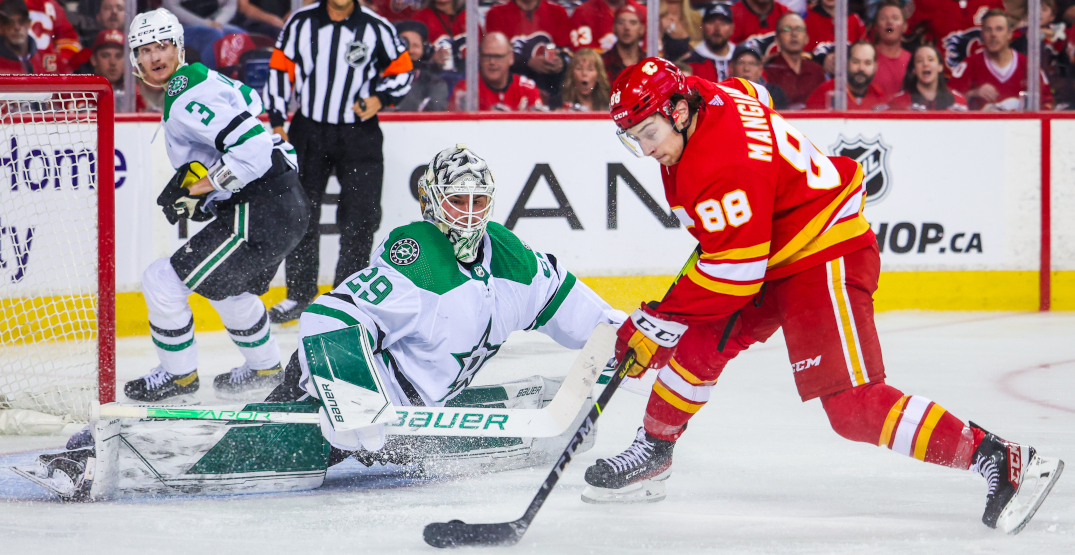 The 2021-22 season was the most prolific offensive NHL season in 26 years.

But don’t tell that to the Dallas Stars and Calgary Flames.

After Calgary shut out Dallas in Game 1, the Stars returned the favour by blanking the Flames 2-0 in Game 2.

Dallas will host the Flames in Game 3 on Saturday night.

Joe Pavelski scored the winning goal for Dallas midway through the first period.

Playoff Pavs gets us started. 👏

The goal was Pavelski’s 62nd career postseason goal, which is second all-time among American skaters.

Too bad Hull isn’t still with the Stars, because this series could use a few more snipers.

Jacob Markstrom and Stars goaltender Jake Oettinger have been the story in the series so far. After Markstrom’s 16-save shutout on Tuesday night, Oettinger returned the favour with a 29-save shutout of his own in Game 2.

Since Elias Lindholm scored the Flames’ only goal of the series just five minutes into Game 1, Oettinger is currently on a shutout streak of 114:59.

If the sophomore netminder can carry his brilliance into Game 3, he does have an outside shot at setting the Stars franchise record for longest playoff streak in franchise history.

Marty Turco currently holds the record with a shutout streak of 162:05.

If the Flames are going to spoil Oettinger’s streak, they’re going to need their top players to start producing.

“I thought we had plenty of scoring chances tonight. Their goalie played well.”

“We just gotta score…starting with myself.”

Gaudreau has yet to fully shake his reputation as an underwhelming playoff performer. He has eight goals and 20 points in 32 career postseason games.

Another Flames forward who will be looking to alter his spotty playoff reputation as the series progresses is Matthew Tkachuk. The 24-year-old has three goals and seven playoff points in 26 games after tonight.

After the game, Tyler Toffoli put the loss into perspective.

“It’s playoff hockey. I mean, it’s not easy to score goals in the first place, let alone playing a team like this who plays extremely defensive.”

The loss doesn’t change anything for us. Our goal was to go into Dallas and win two games anyways.”