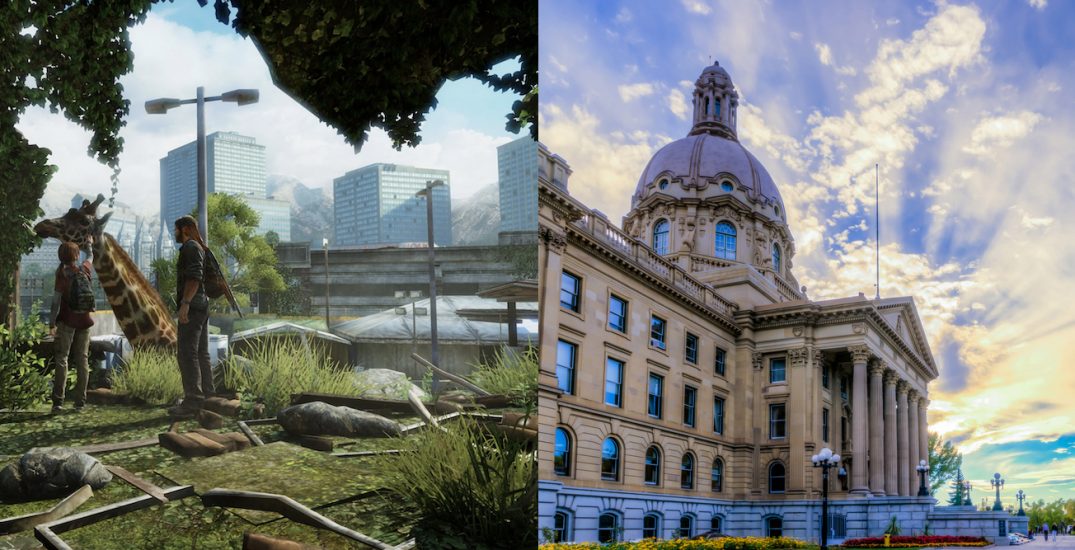 You might have noticed that parts of Alberta have been turned into a post-apocalyptic wasteland lately, but not to worry: the zombies aren’t invading (yet), it’s just the magic of film.

Upcoming HBO series The Last of Us has been spotted shooting in various locations across the province, including Calgary and Edmonton. Production for the show is also slated to take place in Canmore this November.

The Last of Us is based on a 2013 video game of the same name, and it follows the journey of Joel, a smuggler tasked with escorting teenager Ellie across the post-apocalyptic United States. What starts as a small job becomes a difficult trek, as the pair travels across the US and must depend on each other for survival.

The production’s IMDb page shows that the series will also feature Gabriel Luna as Joel’s younger brother, along with Merle Dandridge, Jeffrey Pierce, and Anna Torv.

The show is written and executive produced by Craig Mazin (HBO’s Chernobyl) and Neil Druckmann (The Last of Us and Uncharted video game franchises).

Carolyn Strauss (HBO’s Chernobyl and Game of Thrones) will also serve as executive producer, along with Evan Wells from the original game’s developer, Naughty Dog, and PlayStation Productions’ Asad Qizilbash and Carter Swan.

In early October, production for The Last of Us was spotted in Edmonton at locations such as the Alberta Legislature grounds. The City of Edmonton noted road closures due to filming on 108th Street between Jasper Avenue and 100th Avenue, 104th Street south of 102nd Avenue to mid-block north of Jasper Avenue, and Rice Howard Way.

Filming in Edmonton is set to begin tomorrow at the Alberta Legislature grounds.* #TheLastofUs

Since they will be filming outdoors, we might get some pics of Pedro (Joel), Bella (Ellie) or whoever is on set.

Calgarians saw road closures in the city in mid-October, with downtown’s 4th Avenue flyover closed to traffic from October 15 until October 18. Memorial Drive was also closed between 4th Street NE and 12th Street NE on October 17 for the production.

The 4th Avenue flyover in downtown Calgary prepares for the filming of The Last of Us this weekend. pic.twitter.com/4xyCRBGdmJ

The following week, 1st Street between 11th Avenue and 13th Avenue SW in Calgary was closed from October 23 until October 28.

Up next, filming is set to take place in the mountain town of Canmore for several weeks throughout the month of November. Preparations for the production will occur from November 1 to 16, with the 600 to 800 blocks of Canmore’s Main Street closed to vehicles from November 15 to 20, reopening on November 21.

The Town of Canmore’s website says that residents can expect to see “aesthetic changes and road closures” around the downtown area that will “temporarily transform select areas of downtown Canmore into Jackson, Wyoming.”

“Canmore is about to look a lot more like a post-apocalyptic Jackson, Wyoming! HBO’s #TheLastofUs is coming to town and will be shooting at various locations within the downtown core throughout November.” (1/2)

Shooting for The Last of Us has taken place in other areas of the province as well, including Fort Macleod in July 2021.

According to ACTRA Alberta, filming for the project began in July 2021 and is set to wrap in June 2022. The show is slated to be released on HBO and HBOMax later in 2022. Canadian viewers can subscribe to the HBO package through Crave.

Other notable productions filmed in Alberta include Black Mirror, Interstellar, Fargo, Jumanji: The Next Level, Ghostbusters: Afterlife, Brokeback Mountain, Legends of the Fall, and Rat Race.