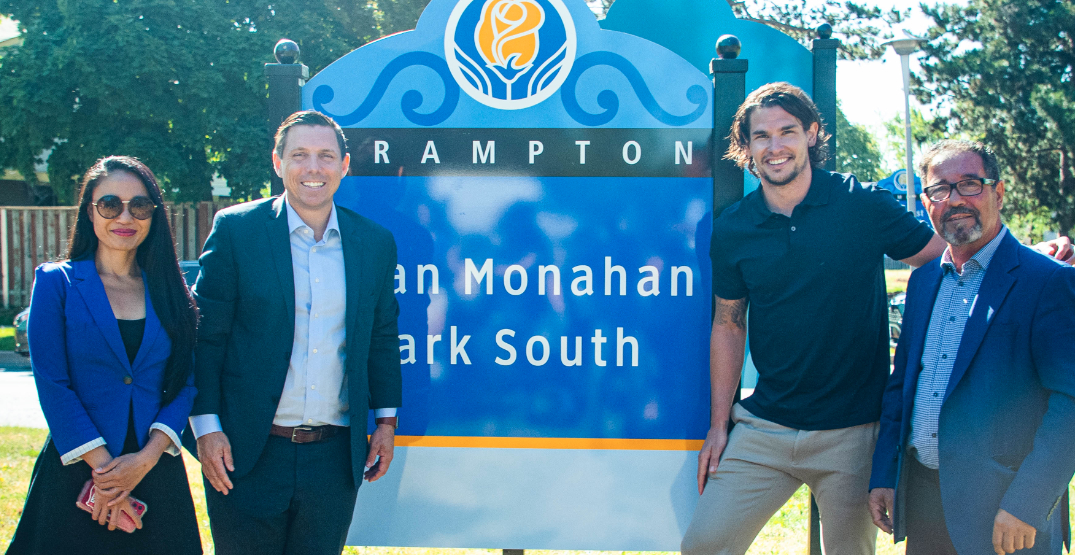 Sean Monahan has accomplished a lot over the course of his hockey career.

You can add a park dedication to the list.

Glenforest Park North and South at 91 Glenforest Road in his hometown of Brampton, Ontario was renamed to Sean Monahan Park on Tuesday.

Today, the community gathered for the official renaming of Glenforest Park North and South to Sean Monahan Park, in recognition of Bramptonian and @NHL player Sean Monahan. Thanks for making #Brampton proud, Sean! 🏒🙌 pic.twitter.com/FTTqmTo3zW

The park renaming comes as part of a municipal project to rename streets and sights after local sports icons.

Monahan, who attended St. Thomas Aquinas Catholic Secondary School in Brampton, spent three seasons in junior with the Ottawa 67s of the Ontario Hockey League before becoming the No. 6 pick of the 2013 NHL Draft by the Calgary Flames.

Sean Monahan despite being busy with the @NHLFlames has never forgotten his roots in #Brampton. He has been a major help in fundraising to support our new hospital. He is a class act. @OslerFoundation @OslerHealth @bramptonhockey @NHLPA 👏👏 pic.twitter.com/jYmPC5Wpxh

Monahan, who has one season remaining on a seven-year contract with an average annual value of $6.375 signed with the Flames on August 19, 2016, underwent season-ending hip surgery — for a second consecutive season — in April.

The center had 23 points (eight goals, 15 assists) in 65 games in a fourth-line role in 2021-22, and missed the entirety of Calgary’s two-series playoff run.