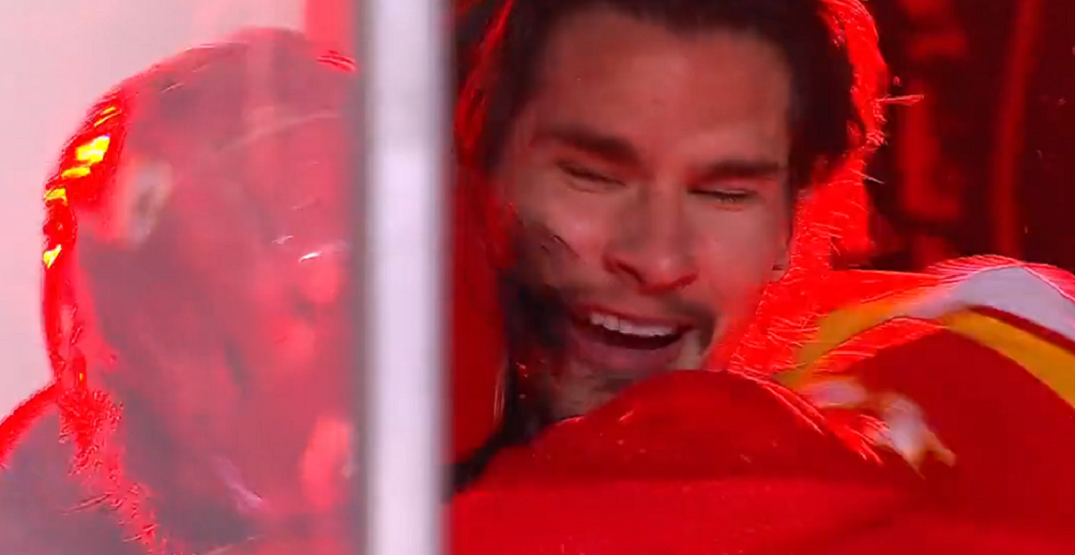 Johnny Gaudreau and Sean Monahan might not have been on the same ice together last night, but it’s clear that there’s little that can separate the longtime linemates.

Monahan’s season ended in early April due to a hip injury that eventually led to surgery, but he’s still been hanging around the rink to cheer on his guys.

And you can bet he was there to support them after their biggest win in years.

Monahan shared an adorable hug with Gaudreau after the Calgary Flames winger put his team through to the second round of the playoffs with a memorable overtime winner over the Dallas Stars on Sunday night.

“I wish he was playing. He’s just the ultimate team guy,” Gaudreau said of Monahan postgame. “Sucks the way it ended for him this year. He’s such a good friend, such a good teammate, such a good leader.”

Gaudreau was an alternate captain for the first time in his career on Sunday, with defenceman Chris Tanev missing the contest due to injury. With Monahan and Tanev both sitting, Gaudreau’s name was called upon to be one of the team’s alternates.

“[I] thanked him tonight for being injured so I could wear an ‘A’ for once,” Gaudreau said of Monahan. “He’s such a great teammate and great friend. He was happy for me and that’s good to see him come on the road with us and watch us on the road and stuff like that.”

Gaudreau’s mom was emotional about the moment, too.

While Monahan remains out for the rest of the Flames’ playoff run, they’ve still got work to do in his absence. Game 1 for the second round of the playoffs between the Flames and provincial rival Edmonton Oilers goes Wednesday night at 8:30 pm MT.