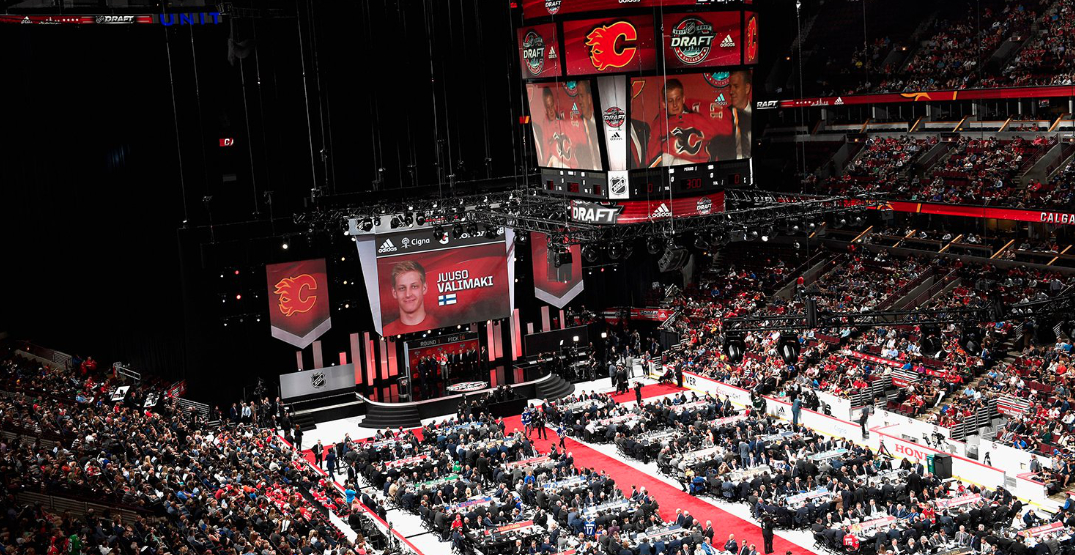 The Calgary Flames will bank on quality, not quantity, at the 2022 NHL Draft.

With just a handful of picks to play with entering the draft, hosting at Bell Centre in Montreal in a little under two weeks’ time, the Flames’ draft situation isn’t one that’ll necessarily excite the casual Calgary fan, but the two-day affair still certainly has the opportunity to mine some junior or European talent that can impact the franchise down the road.

Here’s how the Flames are set up heading into the 2022 draft:

Tod Button and the rest of the Flames scouting staff, at this point, aren’t going to be overly busy when it comes to the 2022 draft. Calgary doesn’t own its first round pick, meaning Thursday, July 7 will largely be an idle outing for them. Friday, July 8 will only be marginally busier, with the team owning their own second round pick, fifth round pick, and seventh round pick. Here’s where these picks line up:

The Flames are devoid of their first, third, fourth, and sixth round picks in the 2022 draft after a whole host of trades were executed by wheeling-and-dealing general manager Brad Treliving.

Treliving optioned Calgary’s first round pick to the host Montreal Canadiens on February 15, 2022 in exchange for forward Tyler Toffoli. Toffoli, who is under contract for another season, had 23 points (11 goals, 12 assists) in 37 regular season games with the Flames, and five points (two goals, three assists) in 12 playoff games. The pick will be No. 26.

The Flames also had a second second-round pick, acquired from the Florida Panthers in the trade that sent the No. 4 pick in the 2014 NHL Draft to the Sunshine State. Treliving flipped the selection to the Seattle Kraken (along with a third round pick in 2023 and a seventh round pick in 2024) in exchange for Calle Jarnkrok. Jarnkrok finished the regular season with four assists in 17 games, and had four points (one goal, three assists) in 12 playoff games. The pick with be No. 61.

Treliving also moved two third round picks. He acquired what turned out to be the No. 90 pick from the Toronto Maple Leafs in the David Rittich trade last year, and flipped it to the Chicago Blackhawks bring in Nikita Zadorov. Treliving also moved Calgary’s third, now the No. 91 pick, to the Boston Bruins in exchange for Daniel Vladar.

In a prior move with Seattle, Treliving moved Calgary’s fourth round pick to the Kraken last summer in exchange for forward Tyler Pitlick. Pitlick had two assists in 25 games with the Flames before being moved as part of the package that brought in Toffoli. The pick will be No. 123.

To round out the Bennett deal last season, Calgary moved its sixth round selection to the Panthers. Florida later flipped the pick, which will be No. 187, to the Buffalo Sabres in exchange for defenceman Robert Hagg.

Organizationally, the Flames are generally best suited to target blueliners in the upcoming draft with arguably their top prospects either tending twine (Dustin Wolf) or up front (Matthew Coronato, Jakob Pelletier, Adam Ruzicka, Connor Zary). The Flames went 11 draft picks between selecting Juuso Valimaki with the No. 16 pick in the 2017 draft and plucking Yan Kuznetsov with the No. 50 pick in 2020, after all. The team also has wildcard Jeremie Poirier, picked 22 spots after Kuznetsov, and Cameron Whynott, a third round pick in 2021, as its recent rearguard targets.

Need, however, won’t dictate choice for Button’s crew. There’s no sense trying to fill immediate holes in the prospect pool without knowing if those holes exist with the NHL club. A ‘best player available’ strategy, whoever’s highest on Calgary’s list when the pick rolls around, will be the approach regardless of need.

The Flames, despite a lack of draft capital, won’t be short on options at any stretch of the draft. And if there’s one thing Calgary has shown is that it can find value in each round.

They’ll hope to with their first pick, coming in the second round. That target could be Elias Salomonsson of Skelleftea’s program in Sweden. Salomonsson is an incredibly polarizing prospect in this year’s class, as the 6′, 172-pound defenceman didn’t necessarily progress as much as many prospect pundits hoped this season. Once a candidate to be a first round pick, the 17-year-old struggled in the SHL, failing to register a point in incredibly limited minutes over a 10-game audition, and amassed just 22 points (11 goals, 11 assists) in 35 games in Sweden’s top U20 circuit. His skating and puck-moving skills are what teams will covet.

The Flames will have to wait until the fifth round, No. 155 to be exact, for their next swing. Brandon Lisowsky of the Saskatoon Blades could be an appropriate target. The forward, who had 33 goals and 58 points in 68 games this season, is adept at finding open spots on the ice to release his shot. It might be ambitious to assume he could fall to the fifth, however, given he has upside as a middle-six winger.

Things will get undoubtedly tighter in the seventh round, but there are still some intriguing swings to take around the No. 219 mark.  Calgary needn’t go too far to find it, either. Zachary Bookman, an overager in the draft class, shredded the Alberta Junior Hockey League with the powerhouse Brooks Bandits, netting an incredible 102 points (21 goals, 81 assists) in just 55 contests to finish third in league scoring. The Merrimack College commit has been passed over twice in the draft already, but the 20-year-old is a fleet-of-foot skater who can carve defences when hauling the puck up ice. He’ll need to work on his all-round game, specifically in his own end.