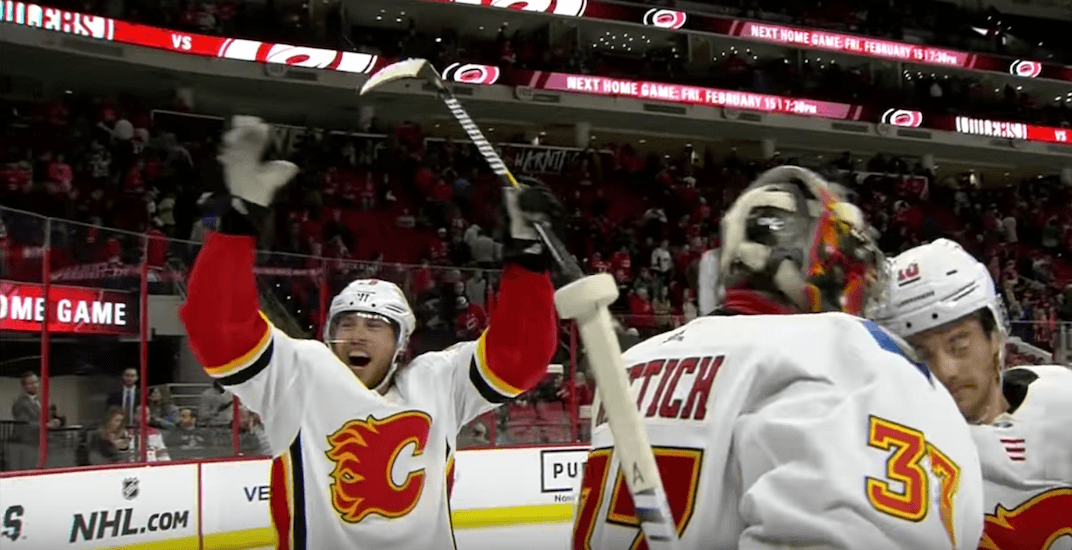 Back in Carolina for the first time since last summer’s blockbuster trade, everything went according to plan for Calgary Flames forward Elias Lindholm.

Not only did the Flames skate away with 4-3 win, Lindholm scored in his return.

After the final buzzer sounded, Lindholm had some fun at the expense of Hurricanes fans, mocking their team’s much talked about victory celebration.

He appeared to love every second of it, while Hurricanes fans weren’t impressed:

It turns out Lindholm had a pretty good reason for trolling his former team, as fans disrespected him during the game.

“My name came up twice on the Jumbotron, I got booed, so it was a nice way to end it,” said Lindholm.

The Hurricanes have been the talk of the NHL this season for their post-game victory celebrations, which begin with an Icelandic-style Skol clap and often evolve into something completely random.

Friday’s win in Raleigh involved a game of Duck Duck Goose, for instance.

Come for the @NHL action, stay for the postgame Duck Duck Goose 😂 pic.twitter.com/KelIvnp6Tq

Hurricanes fans are probably feeling a bit bitter after losing Lindholm, a fifth-overall pick by the team in 2013. Lindholm has fit in perfectly in Calgary, exploding for a career-best season on the Flames’ top line. The 24-year-old has 23 goals and 60 points already, in just 53 games.

It was a sweet return to Carolina for two other former Hurricanes, as Derek Ryan had a goal and an assist, while Noah Hanifin scored the game-winning goal.