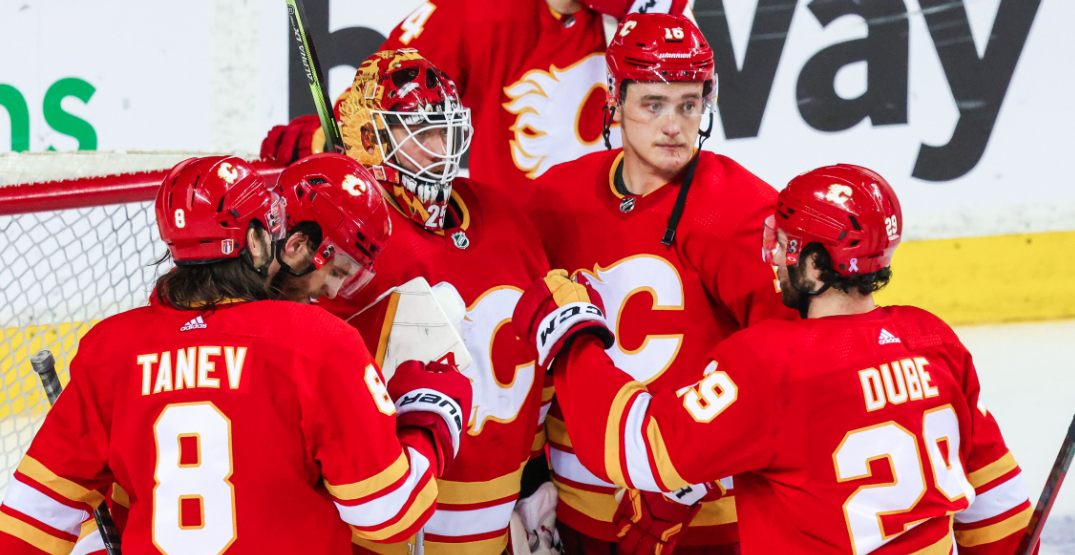 But few would plan a parade about the seven-game feat, especially after being dispatched in five games of the second round at the hands of the provincial rival Edmonton Oilers.

Still, there was plenty of reason to be happy with the result.

And, even, hopeful at what next season could bring.

That is, if general manager Brad Treliving is able to navigate an offseason that has more questions than answers in June.

“I think we’re there,” Treliving said shortly after the ousting. “Now, we weren’t good enough. We’ve got to find out why… we’ve got significant players that you’ve got to get contractually taken care of. That’s just part of business. Every year you have that, right? So we’ll deal with that as best we possibly can, but then you get that core group back together and look at how do you tweak it.”

It’s a tall task, though.

There’s no shortage of work to be done.

Calgary has just seven forwards under contract for next season and only one of them, Elias Lindholm, was among the team’s top-six scorers. There are four defencemen locked in, if we’re including infrequently-used Juuso Valimaki, and both goaltenders will be back in the crease for another tour of duty.

The back end shouldn’t be ignored, either. The trio of Erik Gudbranson, Nikita Zadorov, and Michael Stone could walk, and Oliver Kylington is a restricted free agent.

Lindholm, the team’s top centre, will be back. So too will newcomers Blake Coleman and Tyler Toffoli. Dillon Dube has two years remaining on a bridge deal signed last summer, and Milan Lucic rounds out the expected returnees. Sean Monahan, currently recovering from his second hip surgery in as many seasons, should be ready to go in training camp based on past timelines, too.

The Flames will also return their top pairing of Noah Hanifin and Rasmus Andersson, each of whom took a step to solidifying their effectiveness this season. Christopher Tanev, Connor Mackey, and Valimaki round out the blue line.

Jacob Markstrom, fresh off a Vezina Trophy nomination, and Daniel Vladar provides the group some stability in net.

The total on the aforementioned players runs a tab totalling $55.575 million, according to CapFriendly. With an upper limit of $82.5 million, that’ll leave Calgary with nearly $27 million to play with this summer.

Sounds like a lot of room. That is, until you examine the work that needs to be done and the number of players needed to be added.

No doubt, Tkachuk will be a top Treliving priority this summer — once he gets Gaudreau’s situation sorted. Tkachuk could command eight figures on a long-term deal, or he could be potential trade bait pending how negotiations move.

No question, Tkachuk becomes a hotly debated entity once Gaudreau’s future is determined, but that shouldn’t suggest the 42-goal guy is an afterthought. Far from it. And with Evolving Hockey projecting an eight-year contract with a hit of over $11 million, he’s surely got Treliving’s attention.

So too does Mangiapane, who finished fourth on the club with a breakthrough 35 goals. He’s coming off a two-year contract with an average hit of $2.425 million, and that figure figures to double on the strength of a breakout campaign. He’s in line for a deal north of $5.8 million, according to Evolving Hockey.

Kylington also had a surprise performance in 2021-22, and seemingly out of nowhere. He thrust his way onto the team in training camp and ended up with a nine-goal, 34-point performance thanks to his heady play and dynamic skating ability. That’ll come at a cost of $3.27 million on a four-year deal, Evolving Hockey suggests.

Adam Ruzicka, a centre who managed 28 twirls with the Flames this season, is also due for a new contract and could factor in significantly to Calgary’s roster in 2022-23.

There’s no bigger prize on the open market this season than Gaudreau, who finished tied for second in league scoring with 115 points (40 goals, 75 assists).

He paced the NHL with 90 even-strength points, too, 12 more than Art Ross Trophy winner Connor McDavid. Simply put, he’s the priority. Gaudreau’s career year couldn’t come at a better time, coinciding with the expiration of a six-year, $40.5 million contract signed in 2016. Suffice to say, he’s due for a raise.

And he’s going to get it.

Evolving Hockey has Gaudreau, who seemed to express some desire in returning, projected to earn just under $11 million on a seven-year term. The Flames, however, have the luxury of offering an eight-year term that’ll undoubtedly help lower that figure.

Calle Jarnkrok, a multi-use forward who was acquired at the trade deadline, will likely test free agency given Calgary’s cap complication. Ryan Carpenter, another deadline acquisition, will likely walk, but there’s an argument to be made that both Trevor Lewis and Brett Ritchie, two favourites under Jack Adams winning coach Darryl Sutter, could be had at a song.

So too could defenders Gudbranson and Zadorov, each of whom enjoyed career years under Sutter’s tutelage. Each hit new personal bests in points while anchoring down a third pair that was a lot tougher to play against than initially expected. Both won’t be back, and it’s likely neither will return.

Count on Ruzicka becoming a full-time member of the Flames next season. Both Treliving and Sutter have talked before about needing a push from the American Hockey League, and Ruzicka fits the bill.

So too could Jakob Pelletier, who had an impressive rookie campaign in pro hockey with the Stockton Heat, Calgary’s minor-league affiliate.

On defence, Mackey could step into a full-time role after seemingly leapfrogging Valimaki for the coveted position of next-call-up on the blue line.

Fitting everyone under the cap

It’s easiest to start with re-upping Ruzicka to a two-year contract in the neighbourhood of $900,000 to build some depth up front on a roster being reconstructed on the fly.

Stone has signed three consecutive one-year deals with the Flames, too, making him an easy addition, if not one automatically taken for granted, to serve as the team’s seventh blueliner. Lewis, similarly to Stone, remains serviceable and a player Calgary should be looking at bringing back.

Tkachuk, fresh off a performance that saw him finish eighth in league scoring, could very well take his qualifying offer before looking at either negotiating his eight-year extension. It makes sense from his side for a number of reasons, although it’s probably less than ideal from a Flames standpoint.

The aforementioned moves still leave Gaudreau and Mangiapane to get signed, as well as adding another forward and defenceman. All this needs to be done within the confines of $14.4 million of remaining space. Not likely.

Gaudreau could be a discount at $10 million, and Mangiapane at $5 million wouldn’t necessarily be out of the question, though probably a little favourable towards the home team. Both may be more receptive to those deals should they value keeping the band together as much as possible. Kylington, the remaining RFA to get done, likely bridges after a surprising season.

The bad news is all of these moves leaves Calgary over $4 million from clearing the cap. A buyout of Monahan clears $4 million for the Flames this season, before counting the salary of his replacement. A Monahan move might come at the detriment of keeping Gaudreau long-term, too, with the pals being close. A Lucic trade isn’t a given, as he has a modified no-move, too.

A trade of Dube in exchange for a draft pick, and replacing him in the lineup with Pelletier, does offer a hint of savings, and a flip of Monahan, a sliver retained, along with a draft pick, could put Calgary in line to comply.

This lineup would be cap compliant: 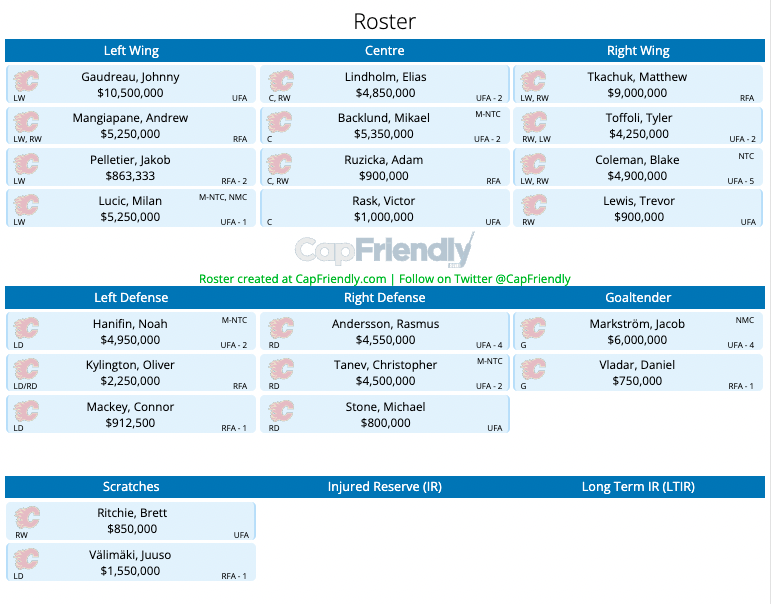 It’s not an ideal scenario, but there’s no easy process to getting the Flames cap compliant while retaining its top two stars in Gaudreau and Tkachuk. There’s some tough moves to be made. In reality, Calgary could find themselves with a lot more flexibility, albeit a lineup short on star power, should one of the two walk.

Treliving’s task isn’t an easy one.

And it should make for a tough summer for the Flames.