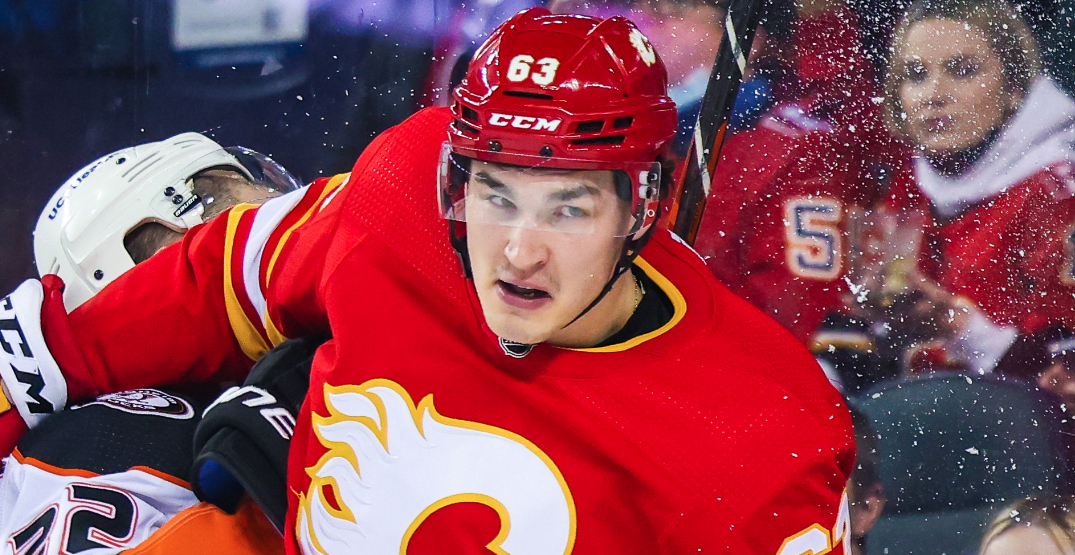 The Calgary Flames will feel the salary cap crunch next season should they find a way to lock in Johnny Gaudreau on a long-term contract.

The Flames have nearly $27 million in space to play with this offseason, according to CapFriendly, but that’s before a potential pair of eight-digit pacts for Gaudreau and Matthew Tkachuk, on top of deals for Andrew Mangiapane, Oliver Kylington, and at least six other roster spots.

It’ll make prospects pushing up from the Stockton Heat of the American Hockey League on low or entry-level deals a must.

“In order for your team to get better because of salary cap and because of development and because of schedule, for younger players you need one or two or three to push to make teams. If you look at this past season, a boy like Kylington, who came in and made the team, he did it the way you’re supposed to do it. Instead of being given a job, he came and earned his job. That’s what those guys are doing in Stockton now.

“Is there one player there or is there two or is there three, I don’t even know, that are going to push to play with the Flames next year. That’s what that’s about.”

Stockton is currently in the midst of a deep run in the Calder Cup Playoffs, trailing 3-1 in a best-of-7 series against the Chicago Wolves — an affiliate of the Carolina Hurricanes.

It’s given a glimpse into who might be ready for Calgary’s main roster next season.

“I have a pretty good idea now,” the Jack Adams Award-winning Sutter said. “First off, you base it off your team and what your needs are and what the fits are. That’s what’s important.”

The Flames will have plenty of need for bottom-six contributors with the likes of Trevor Lewis, Brett Ritchie, Calle Jarnkrok, and Ryan Carpenter set to become unrestricted free agents.

The most likely candidate to step forward and steal a job down the middle is Adam Ruzicka. The 23-year-old played 28 games with the Flames in 2021-22, netting 10 points (five goals, five assists). He spent 16 games in the regular season in the minors, netting 20 points (11 goals, nine assists). It’s expected Ruzicka, the No. 109 pick in the 2017 NHL Draft, will be given a long look in training camp.

So too will Jakob Pelletier, the Flames’ first pick (No. 26) in 2019. Pelletier, a pesky winger, pieced together a successful first season of pro hockey with the Heat, collecting 62 points (27 goals, 35 assists) to finish third in the AHL in rookie scoring and second overall on Stockton’s roster.

Up front isn’t the only place Calgary could use some aid.

The blue line could lose Erik Gudbranson, Nikita Zadorov, and Michael Stone, meaning there’ll be opportunities on the back end, too. That should, in theory, open up competition between one-time unrestricted free agent collegiate signing Connor Mackey and first-round pick Juuso Valimaki.

Valimaki, 23, had two assists in nine games with the Flames and added 18 points (two goals, 16 assists) in 35 games with Stockton this season. Mackey, with a late-season recall to Calgary, seemingly jumped the queue on Valimaki, however.

Mackey, 25, had one assist in three games in the NHL this season, and 36 points (five goals, 31 assists) in 53 minor-league skates.

About the only place the Flames won’t look to add is between the pipes, with Vezina Trophy candidate Jacob Markstrom set to return with 23-year-old Dan Vladar behind him. It’ll give Dustin Wolf more time to percolate with the lion’s share of the load when the minor-league affiliate moves to Calgary.

With the Flames facing a cap crunch one way or another, the above names are sure to make waves next September.