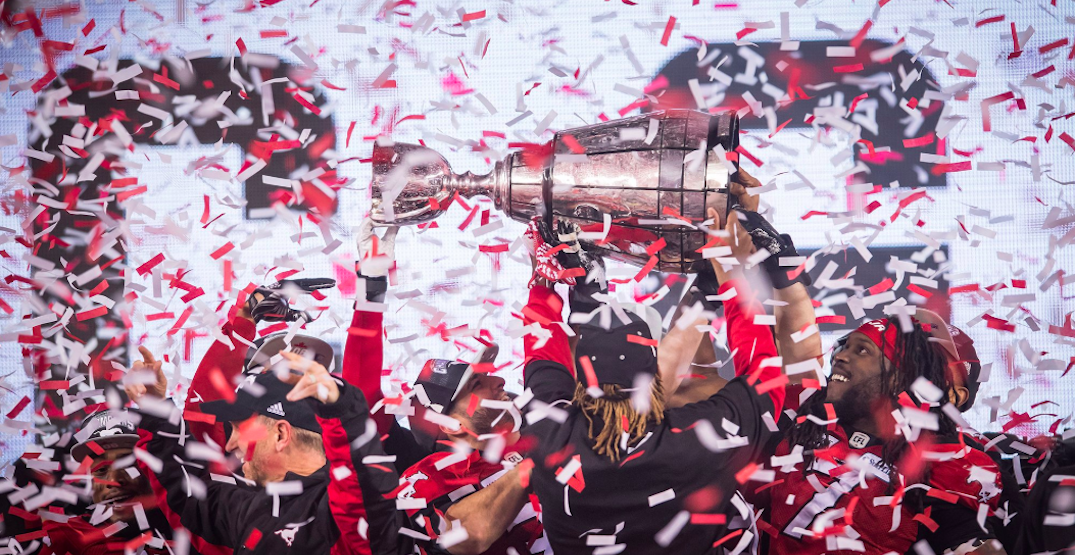 The Calgary Stampeders are the 2018 Grey Cup champions.

In a 27 to 16 victory over the Ottaway RedBlacks, the Stamps managed to end their two-year-long Grey Cup losing streak to prove that the third time really is the charm.

What’s more is that they did it on a slippery Edmonton field, meaning that their champagne-soaked celebration was held in the Eskimo’s very own locker room — a fact that many Stampeders fans were quick to point out following the big win.

Many red and white-clad football fans made the three-hour trip up to Edmonton to watch the game live, while others had their eyes glued to TV screens in the homes and bars of YYC.

Still, that didn’t stop them from congratulating the team over Twitter following Sunday’s fourth quarter, with Stamps fans from all around rejoicing in the long-sought victory.

Here are just a few of those reactions to this weekend’s big Grey Cup win:

I’m already going to be disappointed if the Stampeders don’t go back to back. #GreyCup106

I am sure the Stampeders will leave enough champagne stains on the Eskimos carpet for them to remember at training camp who is the top dog in Alberta. #OTTvsCGY #GREYCUP

CONGRATULATIONS to the Calgary Stampeders. You fought, you won and you deserve the GREY CUP. AWESOME GAME.

Between the Calgary Flames sweet win and the Calgary Stampeders winning the Grey Cup, I’m proud to be able to call Calgary my hometown #HometownPride #Calgary #Stampeders #Flames

To all the “ABC..anyone but Calgary folks I met this weekend”…. sorry!! pic.twitter.com/1ZSp9GI3Sw

THE CALGARY STAMPEDERS ARE THE 2018 GREY CUP CHAMPS!!! pic.twitter.com/HCMLBpUDeC

This was the best thing about the Stampeders winning the Grey Cup. https://t.co/w1n4nWY3bv

The City of Calgary will be hosting a Stampeders rally on Tuesday at noon for anyone who would like to celebrate with the team in person.