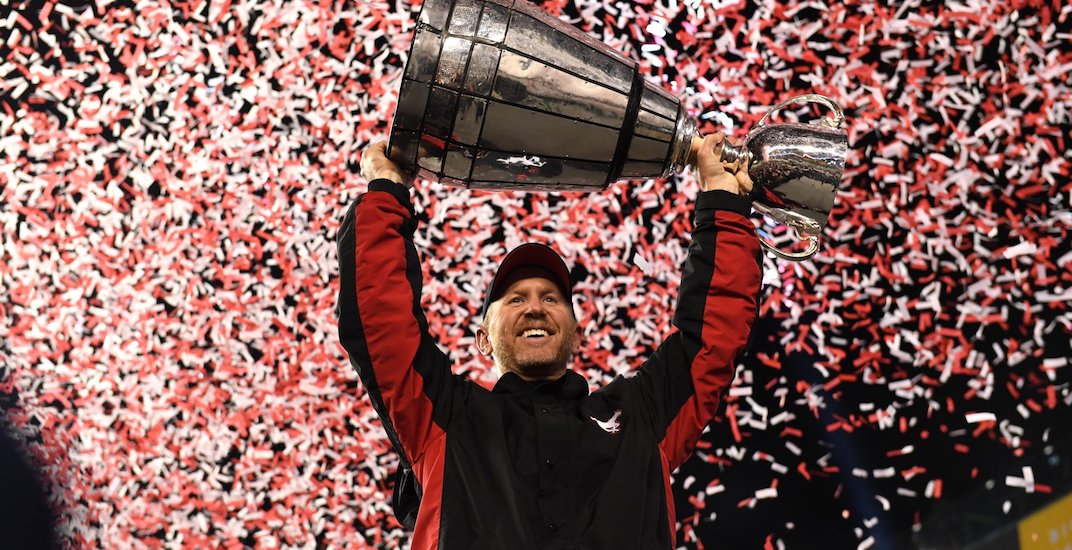 Third time was a charm for the Calgary Stampeders.

After entering the Grey Cup as heavy favourites, only to lose the past two championship games, the Stampeders finished the job this time.

Calgary proved they were the class of the CFL this season, defeating the Ottawa RedBlacks 27-16 to capture the 106th Grey Cup in Edmonton.

Dave Dickenson has won the Grey Cup as a player and as a coordinator, but this was his first as a head coach.

It's raining red and white! 🔴⚪

“I wanted this [game] bad. I don’t know if I ever wanted a game any worse. But it’s more about the players.”

The Stampeders had to overcome the pressure of facing a third straight championship loss, a slippery field, and neutral fans in the Alberta capital cheering against them.

Players on both teams were slipping and sliding their way around the field, which made for a sloppy first quarter. With the Stampeders driving down the field on their first drive, Bo Levi Mitchell was picked off in the end zone – surely bringing back bad memories of Grey Cups gone by.

Credit to Mitchell and his teammates, they were unfazed. Calgary’s QB threw the only touchdown of the first quarter with under five minutes left, a 21-yard completion to running back Don Jackson.

Calgary extended their lead to 14-3 after a touchdown catch by Lemar Durant – who was named the game’s Most Valuable Canadian.

RedBlacks QB Trevor Harris delivered when his team needed a big play, throwing a 55-yard touchdown pass to Julian Feoli-Gudino. After a successful two-point conversion, Ottawa was within a field goal.

The Stamps got a big play of their own before the end of the second quarter, as Terry Williams set a new Grey Cup record with a 97-yard punt return for a touchdown.

Terry Williams returns a punt 97 yards for a @calstampeders touchdown with one second remaining in the first half! 🔥👏#GreyCup #CFL pic.twitter.com/lRMCpLAm5t

Halftime was LIT, thanks to Canadian recording artist Alessia Cara…

It was a relatively uneventful second half, and that suited the Stampeders just fine.

Calgary outscored Ottawa 6-5 in the final two quarters, produced with field goals and a conceded safety. The RedBlacks turned the ball over three times, once on downs and twice on Harris interceptions – as Ottawa pressed to tie the game.

Mitchell, who completed 24 of 36 passes for 253 yards, with two touchdowns and two interceptions, was named Grey Cup MVP.