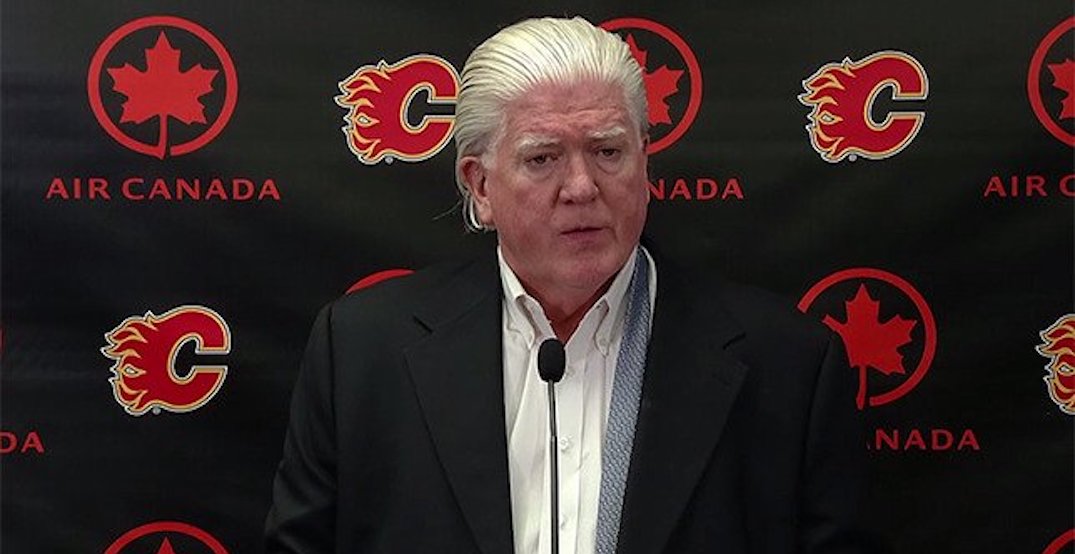 Brian Burke, the president of hockey operations with the Calgary Sports and Entertainment Corporation (CSEC), will be stepping back from the organization.

The announcement came on Friday morning, with a release from the Calgary Flames stating that the change will become effective as of May 1.

“When Brian came to us in September 2013 we discussed a structure and timeline of four to five years for his new role. Each year we review our mandate going forward and determined together that we would move on,” said Ken King, President and CEO of CSEC, in the release.

“Brian’s leadership and guidance of our hockey operations and work with General Manager Brad Treliving have been exemplary and we are grateful for his contributions. His charity work and organizational representation in our community are legendary as he has touched so many with his generosity.”

Operation of the Calgary Flames will be left in the hands of GM Brad Treliving, Vice President of Hockey Operations Don Maloney, and Assistant General Managers Craig Conroy and Brad Pascall.

This isn’t the first big change for the Flames this off-season, as Bill Peters was officially signed on as the Flames’ new head coach on Monday, replacing Glen Gulutzan, who was fired last Tuesday.

As for Burke, a release from Sportsnet states that he will be joining them for the remainder of their 2018 NHL Playoff coverage.

“Brian is one of the most experienced, respected, and knowledgeable executives in all of hockey,” said Scott Moore, President of Sportsnet and NHL Properties, in the release.

“We are thrilled to have him join the team, bolstering what is already a stellar roster of NHL hosts, commentators, analysts, and insiders. He will provide a unique perspective in which we believe Canadian hockey fans will be extremely interested.”

So you may not be seeing Burke at the head of the Flames’ again anytime soon, but you’ll be able to catch him this weekend during the NHL playoff games.

“I’m thrilled to be joining an outstanding team at Sportsnet,” said Burke in the release.

“Hockey is king in Canada and I look forward to being part of the group that is consistently delivering the best hockey content to fans across the country on all platforms.”

Thank you to the @NHLFlames organization and fans for all your support. Southern Alberta is a great place for hockey and I feel lucky to have called Calgary home 🏒🔥🙏