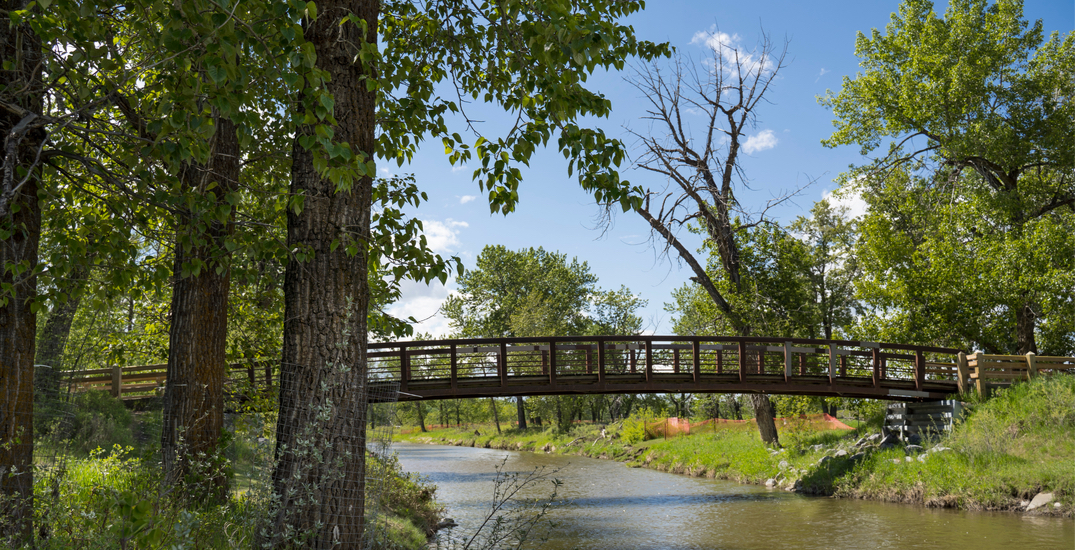 Spring has sprung in Calgary (mostly – we’re also just waiting for “second winter” to hit), meaning it’s the perfect time to get outside for a walk in one of the city’s outdoor spaces.

Calgary is home to a number of stunning parks, offering tons of spots to get outside this spring.

Whether you want to check out an urban park near the downtown core, stroll along the river, or head into the forest to feel like you’ve escaped the city, there’s sure to be somewhere in YYC that’ll fit your walking style.

Check out our list of some of the best places to go for a walk in Calgary this spring.

Fish Creek Provincial Park is the second-largest urban park in Canada at 13.48 square kilometres, and it offers over 100 kilometres of both paved and unpaved trails. A lot of the park has been kept in its natural state, and you’ll find forested areas, river access, and wide open spaces. Fire pits, picnic areas, an outdoor pool, a restaurant, and a cafe add some city touches to the massive park.

Where: The park has a number of entrance points, including:

This northwest Calgary park offers up both mountain and city views and has tons of paved pathways and grassy spaces to enjoy. Nose Hill Park also has designated off-leash areas, hiking trails, and native grasslands.

North and South Glenmore Parks border the Glenmore Reservoir, making you feel as if you’re lakeside. Weaselhead Flats links the two parks and provides plenty of natural areas, making you forget you are still within city limits.

These parks feature a little bit of everything, from paved pathways to hiking trails through the trees, a waterpark, a bike pump track, and a sailing club.

Edworthy Park rests in a valley along the Bow River and has a playground, picnic shelters, fire pits, and off-leash areas. The park also hosts the Douglas Fir Trail, perfect for urban hiking, and the Lawrey Gardens, for that extra boost of nature.

Bowness Park boasts a variety of experiences, including pathways that run alongside the Bow River, a restaurant, a wading pool, and boat rentals to paddle on the park’s lagoon. There’s even a small train that runs through the park during the warmer months.

Baker Park is located just across the river from Bowness Park and provides nature lovers with a grass amphitheatre, a disc golf course, and several archways and promenades, making this a popular spot for weddings.

Ralph Klein Park is a man-made wetland, constructed to improve stormwater quality before it enters the Bow River system. The park has a picnic area and a community orchard, which boasts five varieties of pear trees and eight varieties of apple trees.

The Environmental Education Centre contains an indoor classroom, meeting space, a resource library, an art studio, and interpretive signage to learn more about the wetlands.

Prince’s Island Park is the perfect spot to escape the busyness of downtown Calgary without going far. Flower gardens, expansive grassy spaces, and several bridges make for a picturesque park in the city centre.

This recently revitalized urban park in Calgary’s East Village offers up several unique features to explore. A seasonal beach, “The Rise” hill, the Bloom sculpture, and Lookout Plaza are just some of the many spaces Calgarians can enjoy, along with paved walking paths and trails winding across the island.

Sandy Beach is a popular place for picnics, strolling and lounging along the Elbow River, and swimming and rafting as the weather gets warmer. The southwest Calgary park boasts picnic areas and shelters, fire pits, and playgrounds.

River Park can be found on the ridge above Sandy Beach and offers an off-leash park, gravel pathways, and stunning views of both the valley below and the city skyline.