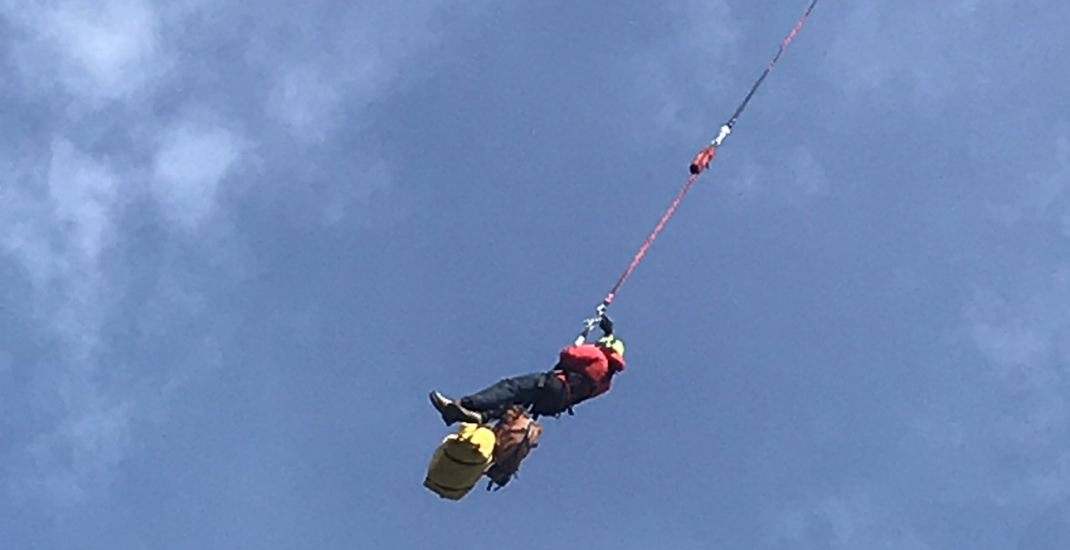 Coquitlam Search and Rescue brought in a helicopter to help an injured woman during a Mother’s Day hike on Sunday afternoon.

According to Darren Timmer of Coquitlam Search and Rescue, the team was tasked to locate a 59-year-old female with an injured ankle on Coquitlam’s Eagle Mountain.

The initial report indicated that she was unable to put weight on her injured leg and couldn’t walk any further down the trail.

“The trail was quite steep and rugged where they were, and we were told that the woman had twisted her ankle when one of the rocks that she stepped on rolled under her feet,” Timmer told Daily Hive via email.

Coquitlam SAR members responded on mother’s day to rescue a 59 y/o woman (and her daughter) with an ankle injury on Eagle Ridge.

We long lined the subject out to Eagle Mountain park. pic.twitter.com/jzt2ngZ1KB

“We found out that she had previously broken this same ankle six years ago.”

Luckily, the woman was accompanied by a party of four, which included her daughter.

Timmer explains one crew was sent out via foot and another two members who are part of the long-line rescue team flew with Talon Helicopters and helped retrieve the woman from the trail.

The woman was lifted to safety by 5:30 pm and was later transferred to the care of the BC Ambulance Service. By 7 pm the other three hikers, including the woman’s daughter, were escorted off the trail by the field team.

“Both the mother and daughter were in good spirits, and doing well,” said Timmer.

“The daughter was very thankful that we were able to rescue her mom on Mother’s Day, and said it was a Mother’s Day that they would never forget.”