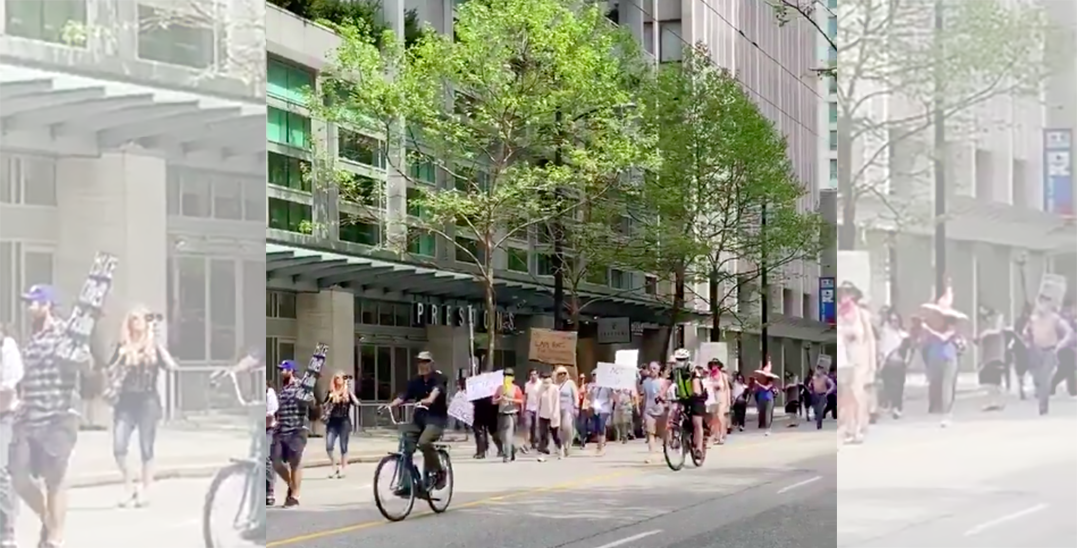 A group of protesters in downtown Vancouver. (Mark Marissen/Twitter)

Protesters against the economic and physical restrictions resulting from the COVID-19 pandemic returned to Vancouver on Sunday.

This group of demonstrators marched through the downtown core carrying signs and megaphones. Videos captured and shared by Vancouver residents on social media show the protesters yelling phrases such as “Trudeau must go” and “What do we want? Freedom!”

Covid hoaxers in Vancouver yelling “Trudeau must go.” This week they aren’t bothering with physical distancing at all. pic.twitter.com/sVgmJR9b9g

“What do we want‽ FREEDOM! When do we want it‽ NOW! …”

I suspect this is (again) a reaction to some of the ways others have reacted to #covid19 #coronavirus . pic.twitter.com/Maj6ZagSY6

The large crowd, which looks to consist of more than 50 individuals, can be seen marching through Davie Street, as well as West Pender Street.

Even in Vancouver, Canada. Such idiots. pic.twitter.com/UYzQkPeYFQ

Another video shows a group of protesters arrive at St. Paul’s hospital, located on Burrard Street.

Medical staff, police, and security members can be seen standing outside of the hospital, and a brief exchange appears to take place between protesters and a police officer.

Something happens in the intersection causing the crowd to lash out at officers pic.twitter.com/IYPRMTgw9l

This latest protest follows a group of demonstrators that were seen near False Creek earlier this May, as well as coronavirus conspiracy theorists near Vancouver’s City Hall in April.

BC has forbidden gatherings of more than 50 people and ordered many non-essential businesses closed to prevent the spread of the illness.

The virus has infected more than four million people worldwide and the respiratory illness it causes has killed more than 278,000, according to the latest report from the World Health Organization.

But some people, including the demonstrators on Sunday, believe we would be better off if authorities allowed the economy to reopen.

Daily Hive has reached out to the Vancouver Police Department for further comment.