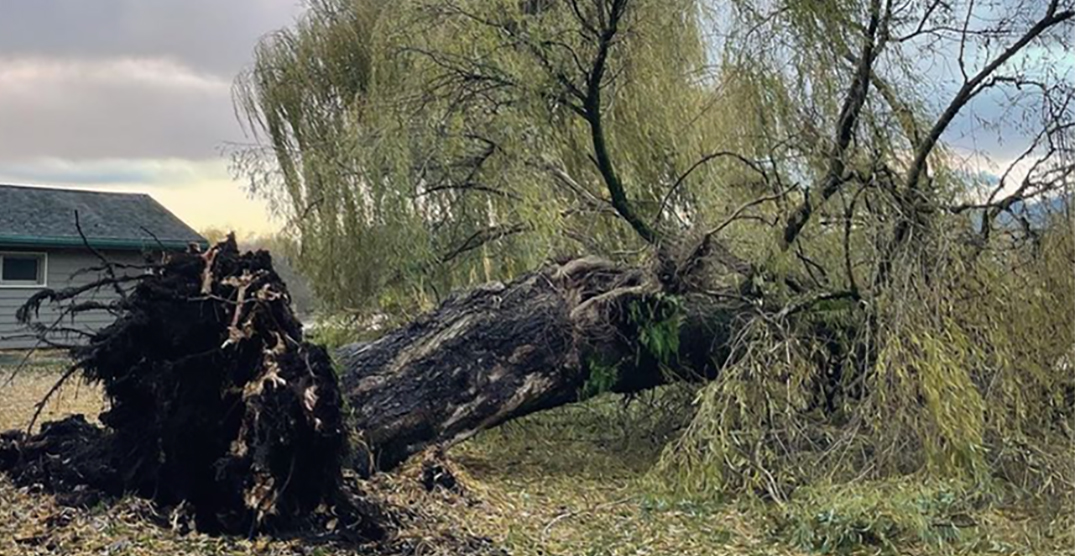 A record-breaking atmospheric river storm that hit BC this month and ushered high winds afterwards has felled several tall trees at Trout Lake in East Vancouver.

Videographer Robert Alstead said he saw three fallen willows on November 17. One massive tree was on its side near the building at the south end of the lake, with yellow leaves still clinging to its branches.

When I was filming floodwater in #TroutLake on Monday I heard a huge crack. I thought a tree had fallen. But nothing seemed to go down. Snapping on the inside? Here’s 2 of 3 fallen willow trees. Beautiful big trees, but vulnerable to weather extremes of past months. #Vancouver pic.twitter.com/XY3BUTwSCe

The tree was ripped out of the ground, roots and all, with a huge dirt-covered cylinder making up its bottom end.

People walking in the park snapped photos of the trees and their relation to the larger climate crisis.

Others mourned the tree for the calm in brought the park.

“I will miss the shade of this beautiful old willow … Many a parent has had a moment to breathe under its branches while kids ‘full of beans’ played on the old playbround,” Dr. Rita McCracken tweeted.

It fell down in the #BCFlood storm last week.

Many a parent has had a moment to breathe under its branches, while kids “full of beans” played on the old playground.

The banks of the lake have also risen up to flood some areas of the park as much of BC saw record-breaking rainfall over the weekend.

Daily Hive has contacted the Park Board for more information but has not yet heard back.

Trees fell elsewhere in Vancouver, including one that trapped a West End man’s car for several days.